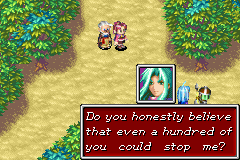 The final chapter of a story arch divided into two pieces, Golden Sun: The Lost Age more than lives up to its position as the conclusion to one epic tale. As an immediate continuation to the adventure that preceded it, the title smartly preserves its predecessor’s visual prowess, musical quality, battle system, and gameplay staples. Yet, it is able to move forward and surpass it with style by boosting the scope of its mandatory and optional content; unexpectedly shifting the plot’s focus to the party that, in the original, played the role of the antagonists; and, most importantly, finding a way to augment the three traits that allowed Golden Sun to stand out from the crowd of role-playing games: its exploration, freedom, and puzzle-solving. Consequently, Golden Sun: The Lost Age is a work as ambitious and flooring as the Game Boy Advance is able to sustain, and in the group of RPGs released for Nintendo’s systems, it is hard to come across a game that is as good, because the balance The Lost Age presents between being traditional and breaking away from the mold is a rare and pleasant sight.