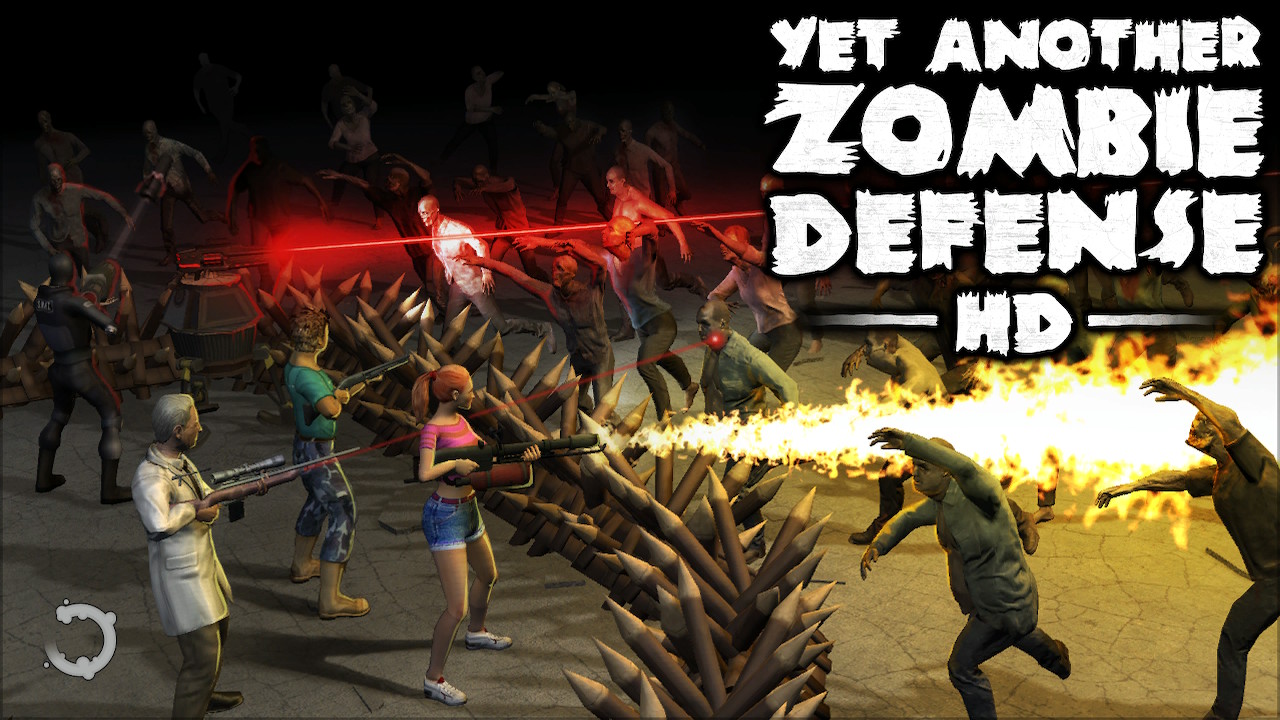 Yet Another Zombie Defense came out in 2010 to Xbox 360 and PC via Steam. The game received mediocre user and critic reviews which begs to wonder…who even asked for an HD up-res of the twin-stick shooter?

There was also an iOS game (which is no longer available) though I am not sure it was developed by the same team, as the game looked entirely different, though it did have similar mechanics and gameplay elements.

There is a zombie outbreak and you: the guy, girl, swat, or doc, need to work together to ward off the undead each night by reinforcing your base and shooting everything in your way. Only by working together and helping cover each other, watching each one another’s back, can you survive long enough to see another day.

Yet Another Zombie Defense HD is the first zombie twin stick shooter, at least that I have played, among the growing list of twin-stick shooters on the Nintendo Switch. In the game, you move your character with the left control stick and aim with the right stick. Shooting is handled by the right trigger and grenades, if you have any, are thrown with the right bumper.

Yet Another Zombie Defense HD has three game modes each with gameplay mechanics that are shared with each mode, though there are variations. Each mode starts you off with choosing your character, which are generic skins which aid in helping you differentiate your avatar from the hordes of zombies and your teammates.

You can choose from The Guy, The Girl, The Swat, and The Doc. Each character plays the same and come with no added benefits, playstyle variations or perks.  The modes in Yet Another Zombie Defense HD are Defense, Endless, and Deathmatch.

Defense is broken into a day and night cycle where during the day you fortify your defenses and at night fend off the enclave of zombies of varying sizes and speed, demons, bat-like creatures, fire dogs, and more. Building up your base requires money which you gain by killing zombies and picking up the loot they leave behind each night.

During the day you fortify your base with structures like wooden spikes, landmines, propane tanks, and turrets. The better an item is the more expensive it will be and some players will find that the earlier waves of enemies are easy to mow down and saving your money for better fortifications is the way to go.

Along with wooden spikes and propane tanks to help drive back the enemy attacks, you can buy weapons and ammo to help fight back the increasingly stronger waves of zombies. Guns include pistols, shotguns, chainsaws, flamethrowers, grenades, rocket launchers, sniper rifles, among others.

Endless mode takes out the daytime aspect of fort building and has you trying to stay alive for the longest amount of time. In this mode, new weapons and stat upgrades are dropped by enemies and your health bar will deplete if you get overrun by zombies. Fallen heroes are revived if teammates pick up a health pack, though the randomness of this adds a level of anxiety I didn’t know I could have from such a budget title.

Deathmatch is basically Endless mode but where surviving means also killing the human players along with avoiding the zombies. This mode is great because the human players have guns and can attack from a distance and are more ‘thoughtful’ in how they approach other humans to kill, whereas the zombies have a horde mentality and usually walk or run in straight lines.

Along with the various modes. there are stat rankings based on how well you have done in regards to the rest of the players in Yet Another Zombie Defense HD. The one that I really liked seeing was how long I survived in Endless mode vs. other people in the world.

There are achievements in the game as well which you get by completing challenges in the three modes and doing things like surviving without taking damage, using only mines, staying alive for five minutes in Endless mode, and more.

I am not 100% sure where Awesome Games has found an undead zombie actor or actress to assist in doing sound work for their game, but the overall grunts and groans and dying sounds are at least convincing. The weapons you shoot all sound impactful, or have a lack of impact, like the pistol for instance.

Rockets and landmines explode with convincing blasting shakes and the sniper rifle feels overtly satisfying as you one shot kill a line up of a half dozen zombies. The fire oozing out of the flamethrower as you spin in circles scorching the horde is another notable sound effects in the game.

Yet Another Zombie Defense HD is not going to win any awards in the graphics department. The game is a simple, viewed from the top down, one background level designed game. The variety in enemies is decent enough with about ten or so different enemy types. Weapons and base building mechanics are also pretty varied, and the ability to build your own base is nice.

If the game would have had fixed placement of turrets and spiked barriers, the score would have been significantly lower. I did experience an awful lot of clipping of enemies through walls, random teleportation of my character, and noticeable lag while in matches with two to four people and loads of enemies on screen.

I played mostly in docked mode, but these issues in performance were experienced in both docked and handheld mode. On one hand, the jittery character movements and hokey animations fit with the premise of the game, though it does make this budget title seem even lower-tiered than maybe it should be.

Despite the budget title that Yet Another Zombie Defense HD is, and the so-so graphical presentation, I had a lot of fun playing each time whether by myself or in a team match. Since there isn’t a dedicated voice chat it’s a bit difficult to coordinate and you are at the mercy of the room host for buying items you want to outfit your base with or guns. A few rooms I was in, people kept removing items which left us defenseless and dead, real quick.