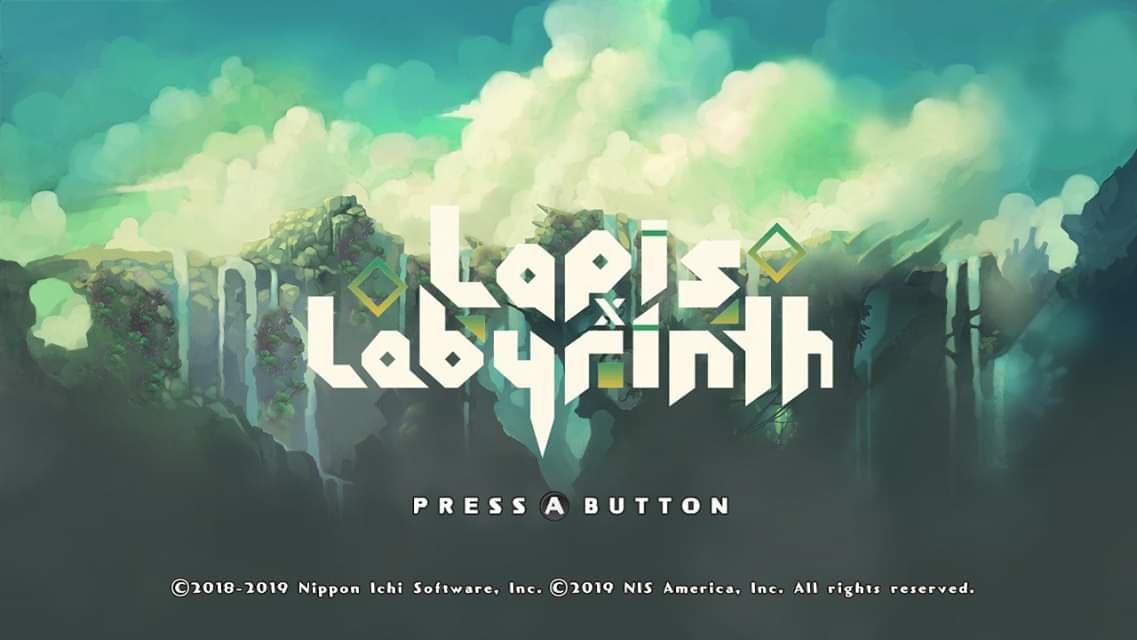 Nippon Ichi Software, based in Japan, is best known for their Disgaea series. The strategy RPG series is well-loved for its humor, depth, and an immense amount of loot. Lapis x Labyrinth is a more casual style of game that incorporates this dearth of loot, but is hidden within an action platformer that doesn’t lean too heavily on its RPG elements.

A town built specifically for the purpose of acting as a hub for the local dungeon is starting to die. There aren’t enough adventurers coming through the dungeons any longer, and the town is losing all of their resources as a result.

The idea is that when the heroes go into the dungeon, they come out with far more loot than they will ever conceivably need, and so they sell the excess to the local merchants for coin, and those merchants can resell that loot for a profit. This is a very barebones story, but it is more than is actually necessary for our purposes.

Lapis x Labyrinth (when said aloud, you can ignore the x), is an action platformer with some beat em up and RPG elements. When you are in the town that acts as a hub between missions, you are given the option to recruit party members, shop for gear, or accept missions.

Upon accepting a mission, you go talk to a lift operator that takes you to the chosen location. Once inside, you will traverse a two dimensional maze filled with gems, loot, monsters, portals, and crystals. Each crystal that you find and activate (with a purple color), powers up the exit portal. Along the way, you may also encounter other portals that will take you to other parts of the level to further explore and find more of the crystals.

When you’ve activated enough crystals, you will then proceed to the next floor, or after fighting the occasional boss fight, be transported back to the hub town. From that point, you can wash, rinse, repeat shopping, recruiting, and taking on the next mission. Ad infinitum.

There are treasure chests strewn about, breakable blocks, and enemy encounters that bar your progress. Defeat all of the enemies, get rid of the barrier in your way. Not all enemy encounters lead this blocking of progress, but most do, and they lead to your high scoring fever mode that is similar to a bonus round on a pinball table or slot machine.

Bright flashing lights, environmental invulnerability, fast-paced music, and increased amounts of loot dropped. The screen becomes a flashing mess of damage numbers and bright gems. As you fight, you also fill up a skill meter, and when that skill meter is flashing “OK”, you can activate your team’s finishing move.

This often wipes the enemy board for anything within a range, as all four of your heroes attack together, and covers an area that is approximately half of the screen. You can cycle through your teammates at will, and the types of attacks and effects that you get will depend on which four team members you happen to have brought with you into the dungeon.

Better gear comes fast and hard, to the point where upgrading doesn’t really seem necessary, although it is a present option. This describes much of what the game does pretty well- it includes the tools and means, but doesn’t really make them an integral part of the game itself.

You can delve deep into the different weapons, and switch weapons between dungeons based upon the type of enemy you face and their strengths/weaknesses, but you can also just scroll through all of your class’ weapon type, equip the one that gives the largest bonus to base attack, and then sell the rest after every dungeon.

The most noteworthy upgrade to take is one that enables your party to increase its max equipment level. That way you can always have as much of your best equipment going at any given time. While the game has an experience system, your characters level up, and their gear has stats that get better, it’s all mostly just happenstance.

Lapis x Labyrinth never makes you grind, although you can accept a mission full of creatures way more powerful level than you…except it just doesn’t really make sense to do that when you can go in order and level up as necessary along the way.

Each level has a timer on it, and if the time runs out, an indestructible, inescapable phantom pops up on screen to end your attempt at the dungeon quest. You still keep some of your loot, and still get all of the experience, so you just go back into the same quest with a stronger party and a better sense of where to go to get through.

As the timer is there for every dungeon quest, the game goes by fairly quickly. You will probably power through most of the quests the first time through in two or three minutes. This makes the game great in short bursts, which is well suited to the Nintendo Switch’s hybrid nature, and definitely makes it more enjoyable as a portable experience.

Lapis x Labyrinth is mindless button mashing and dungeon exploration- it is incredibly fun, but extremely repetitive. There are eight classes to recruit and choose from, but no motivation to every change from your original party, especially if you include a healer in your initial party, which seems like an obvious choice.

Lapis x Labyrinth is a checkpoint platformer with a big emphasis on collecting loot and sprinkled with beat em up style combat throughout. There really isn’t any enticing reason why you need to get so much loot and amass such wealth- other than it is thematically more interesting than collecting a high score.

Having more powerful weapons and armor is obviously advantageous, but the game could have just as easily automatically given you a new weapon after every quest and increased your overall health and armor class without presenting the formality of needing to scroll through multiple lists with dozens of entries to find the one item that is better than your currently equipped piece.

As mentioned above, NISA just took a deep mechanic from one of their most popular and well-loved games (an obscene amount of equipment with different stats and class types), and pasted it on a very basic beat em up that happens to take place in a 2D platformer dungeon.

It is nice that a person so inclined to pore over the different types, advantages, disadvantages, skill enchantments, and weapon customization has plenty of material to work with to feel like they get a better value out of the game…but most of us will never pay attention, and don’t really need to.

This is one mechanic that is included that actually plays well with another mechanic in the game- there are eight different classes to utilize for making your party, and it is free to recruit them.

As such, there is no reason not to have all eight classes as an option, and having the level tied to your gear and your stats tied to your gear means that as long as you have gear for a given party member that matches their gear type- you can swap between them without penalty.

Lapis x Labyrinth features some pretty catchy tunes, and the sound effects are satisfying. This is good, because the sound effects will often drown out the background music, and bring a sense of scale to the battle at hand.

While anyone familiar with NISA’s library will instantly recognize the sound effects as the stock explosions and coin blings that have been used in basically every other game they have developed, this isn’t much of a problem when they are so wonderfully tailored to their purpose. You can customize the voice track your characters have, but they’re all pretty standard Anime tropes.

The individual grunts, screams, and cries run the gamut from hilariously grating to oddly suitable, and sometimes the expected voice effect is not what comes through. A weird thing I noted when I first started playing the game was a seeming slowdown in the music tracks when visuals picked up on-screen.

However, I observed later that if I stood still and just let the music play while nothing else was going on, that it was just part of the composition. It sounds a little off at first, but as you play more and more it suits the frantic pace of the game, and becomes more fitting when it happens in tracks later on.

Lapis x Labyrinth is probably a nightmare for people with photosensitivity related issues. I mentioned earlier that it was full of bright flashes of light, and that only gets more intense as the game goes on. If you don’t have photosensitivity issues, it actually enhances the game greatly.

As a longtime casino employee, I’m well acquainted with the visual and audio cues that trigger the reward centers of the brain, and these effects are applied generously through slot machines and their bonus rounds especially.

Lapis x Labyrinth couples its intuitive, repetitive gameplay loop with audiovisual stimuli that make you feel good, and just bring joy to your face. It’s simple, and repetitive, but oh so fulfilling in that “press a button, get a treat” kind of way. Despite all of this business, the game never seemed to lurch or stutter, even when in handheld mode.

Lapis x Labyrinth is a prime example of games that are just intended to be fun. It is a highly repetitive game, tends to get a little boring after about 45 minutes in a row, but it is also incredibly addictive and still makes you feel very satisfied.

When you play it, the visual and audio cues help you feel vindicated in continuing to push forward, even though this is the fourth dungeon in a row with the same background and a similar enemy set.

When it comes to Lapis x Labyrinth, there aren’t any in-depth customization system that allows you to make your party members and their load-outs, feel like they’re personally your creation. There is no heart-tugging narrative, and the RPG mechanics are mostly inconsequential, but it is a solidly rewarding action title with a lot of bells and whistles.