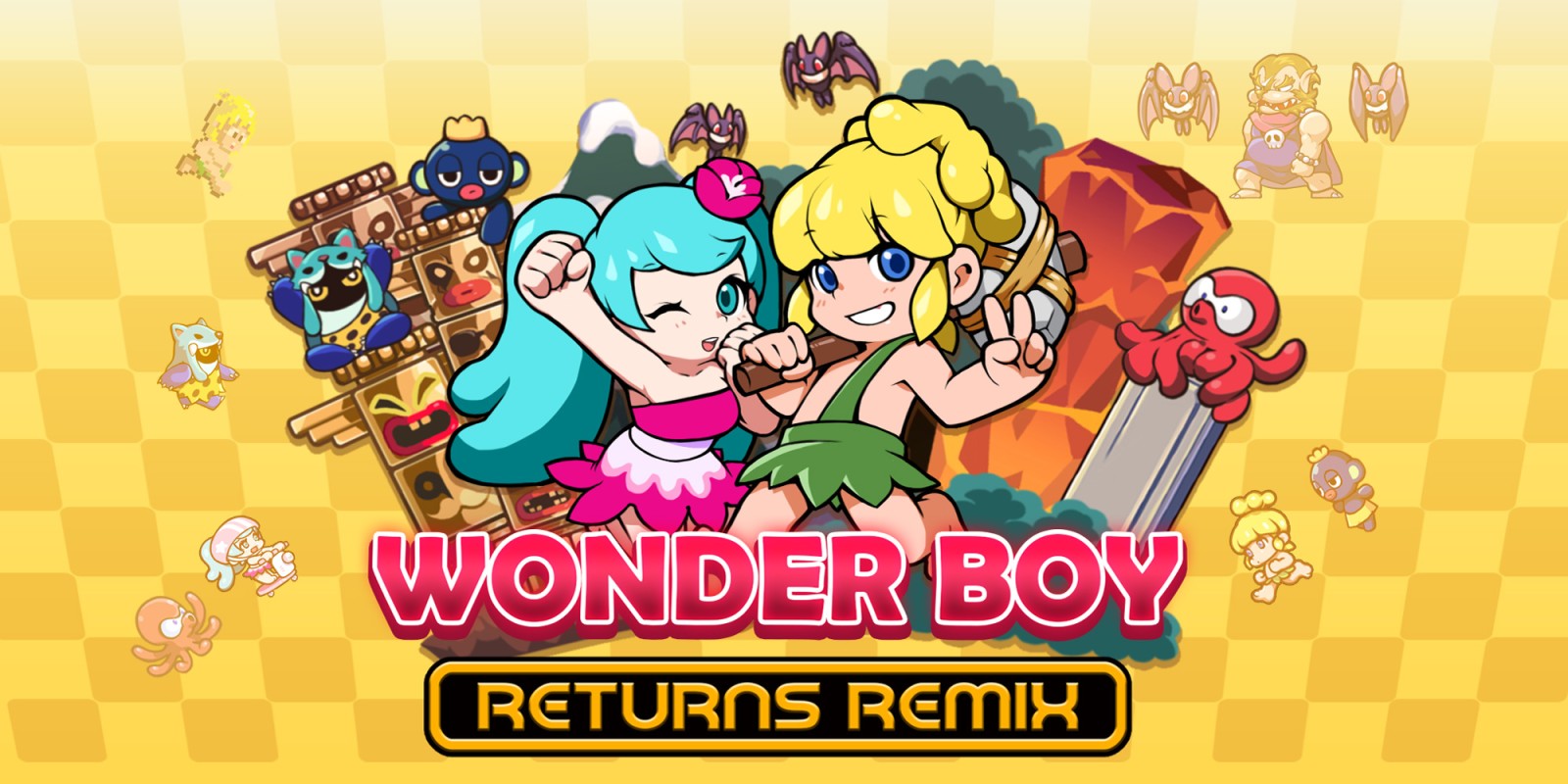 Wonder Boy is a long running series that has been making somewhat of a comeback in recent years. The original game released in 1986 in the arcades, and this version is where my first experience with the game was had.

When I was younger, the holiday resort we used to frequent every other year had a Wonder Boy machine in their car park, and I would spend hours just playing, to the point that the owner would just give me free credits to keep playing (the perks of being a child I guess).

The game eventually came to the Sega Master System, and was a great version that was one of the consoles best titles. When you mentioned Alex Kidd, Wonder Boy wouldn’t be too far off. The series has certainly evolved over time before its frustratingly long hiatus, but it is a series that has a rather rabid fanbase.

Story is not one of the games strong points, but considering the era it was created, it is understandable why this is a very small part of this package. Essentially, the story is about Tom Tom, who is the caveman-looking Wonder Boy. His girlfriend Tanya is snatched away, and it is up to Tom Tom to rescue his beloved.

They do throw a curveball in this version though, so the ending may hold something new for longtime fans to be surprised about. There is also a second ending, though that requires completing the game on the hardest difficulty, and even with my decades of experience with this game, I couldn’t quite make it to the end to witness that, though I’ll touch on why later.

As an old arcade classic, the gameplay is rather simple. It is a side scroller where you run to the right, pass checkpoints, and eventually reach the end goal. There is a meter at the top of the screen that runs down over time, and if it runs out then bye-bye one of your lives. To help refill the meter, you must collect food which pops up as you run through the levels.

Of course, enemies pose a threat to your adventure. Thankfully, you can collect some helpful items from eggs you can kick open. The main item is your weapon, which is a crude stone hammer that you can throw. You have the ability to charge up your shot and throw a massive hammer, or just spam lots of little hammers by mashing the button. There is also the infamous skateboard, which grants you much more speed, but prevents you from travelling backwards.

The game is quite minimal in terms of features. Beyond the different difficulty settings, there is, well, nothing else. That isn’t a bad thing though, as the game itself is a classic for good reason. These different modes change up the gameplay quite a bit as well, making you play in different ways. In terms of the levels, there are eight worlds, consisting of 4 levels each. The game is relatively short (around 3 hours), but is easily replayable, as most arcade games were designed to be.

Anyway, back to the difficulty settings. With the standard mode, you play as Tom Tom, and have five lives to get through each of the levels. Every new level you reach resets you back to five lives, so you can take your time a little, learn from your mistakes, and proceed accordingly.

Hard mode you also play as Tom Tom, but you begin with ten lives, with no level select or continues. You must complete all 8 worlds with those ten lives, or else it is game over and you must start again. This mode is real dang hard, which is why I haven’t been able to quite make it to the end yet (level 6-3 is my highest point thus far).

Easy mode has you play as Tanya. There are no bosses to contend with, you ride a scooter which has you zip around the levels with satisfying speed, and you throw boomerangs instead of stone hammers. The biggest change though is that you are invincible, meaning the only threat you will face is the many pitfalls.

The sound effects are kind of lackluster. There isn’t really anything that stands out, but they never get in the way either. As far as the soundtrack goes, it is made up of remixes from the original game, and these are very nostalgic. The Wonder Boy soundtrack was never a massive hit though, besides the main theme, so all in all the music is fine at best.

Visually, the game is rather striking. They have updated the pixel art of the original, giving the game a cartoon style in its place. The characters, enemies and levels all look superb, and really injects more life into this arcade classic.

Certain things about Wonder Boy were frustrating, as the game was designed to eat quarters. Platforms will fall with no indicator, enemies will run on screen from behind you at breakneck speed, and the level designs can be done in such a way that you will be forced to die without pre-knowledge of what is coming up. All of this is retained, for better or worse.

For all the games shortcomings though, there has always been something charming about the game. That charm is retained, and in some ways enhanced due to the visuals and addition of the charged hammer attack. Not only that, all the arcade trappings don’t destroy what is an inherently good game, one that is a classic for a reason.

Wonder Boy Returns Remix is the best the arcade classic has ever been. Although filled with frustrating holdovers from its arcade cabinet roots, there are plenty of smart visual and gameplay updates that help alleviate those pitfalls.