A Nintendo Direct and Nintendo Treehouse are part of Nintendo’s E3 2019 Plans! 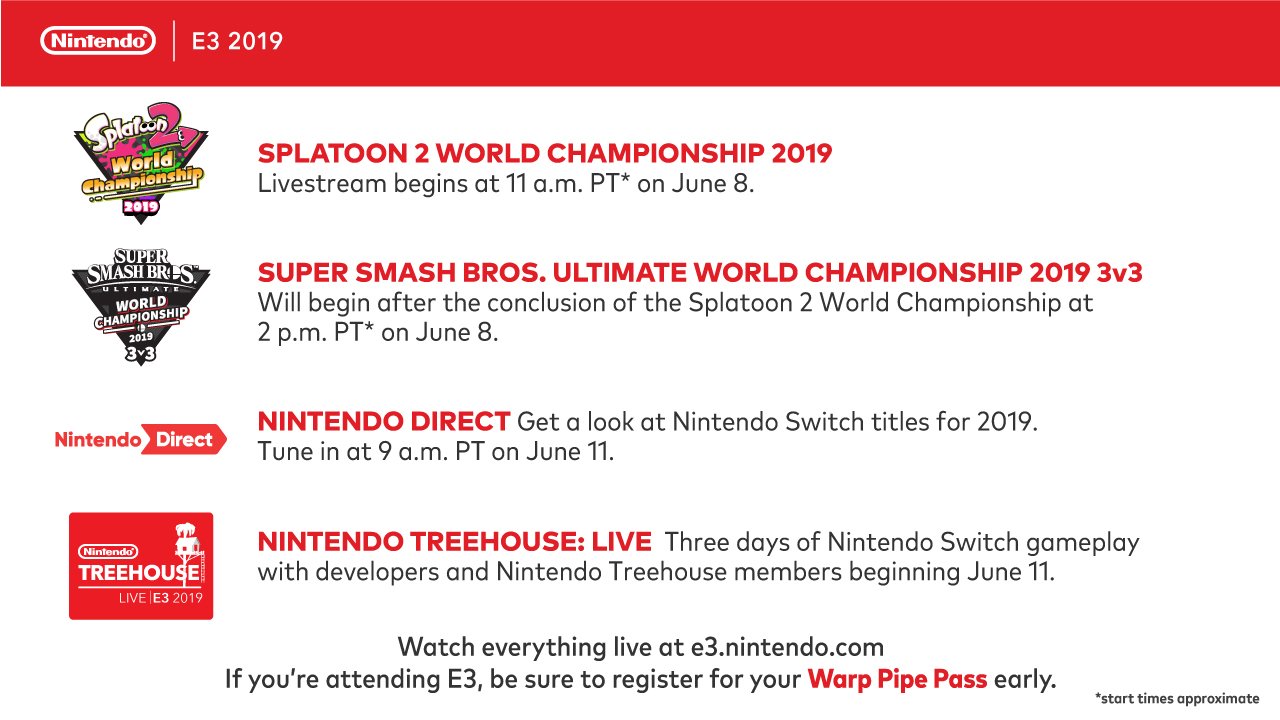 The wait is finally over. Ninte do have now saw to it to unveil their E3 plans and as expected, a Nintendo Direct and Nintendo Treehouse: Live are part of those plans. The full details can be seen here:

European teams to compete against the world’s best squads in tournaments for Splatoon 2 and Super Smash Bros. Ultimate

9th May, 2019 – Nintendo has outlined its plans for the E3 2019 video game trade show, which takes place 11th – 13th June at the Los Angeles Convention Center. The weekend before the show includes two competitions featuring top players ofSuper Smash Bros. Ultimate and Splatoon 2 from around the world. Returning activities during the week include a Nintendo Direct presentation in the evening of Tuesday 11th June, and Nintendo Treehouse: Live, a daily livestream from E3 featuring live gameplay and in-depth analysis of games featured at E3. Nintendo will feature many playable Nintendo Switch games at its booth.

Some of Nintendo’s activities at E3 2019 include:

· Super Smash Bros. Ultimate andSplatoon 2 Tournaments: The team-basedSuper Smash Bros. Ultimate World Championship 2019 3v3 and the Splatoon 2World Championship 2019 tournaments will take place on Saturday 8th June, scheduled to begin at 20.00 CEST. Both events will feature players from North America, Europe, Japan and Australia/New Zealand. The competitions will be livestreamed in English via Nintendo of Europe’s E3 2019 website. Nintendo will communicate additional details about these tournaments at a later time.

o Super Smash Bros. Ultimate:After defeating pre-tournament favourites France at the European Smash Ball Team Cup final on Sunday 5th May, Team Ehre from Germany will be looking to pull off another upset against strong opposition from around the world, including North America’s team of Wrath, Devonte and Poltergust, as well as qualified squads from Japan and Australia/New Zealand. Team Ehre’s RobinGG said, “We don’t have anything to lose. If other regions think we’re weaker – we can show them we’re not.” To see how Team Ehre qualified, check out the Super Smash Bros. Ultimate – European Smash Ball Team Cup grand final on YouTube.

o Splatoon 2: French squid squad Alliance Rogue took the European crown in March by dethroning reigning continental champions BackSquids, who were also runners-up at last year’s world finals. The team of Sorin, Kiver, Erza and Grey will be hoping to go one better than their German rivals and claim the world number one title, ahead of teams like reigning world champions GGBoyz of Japan, FTWIN from North America, and Australia/New Zealand’s Lime Soda. The action takes place on 8th June.

· Nintendo Direct E3 2019: The presentation will begin at 18.00 CEST on 11th June. The presentation, which focuses entirely on software, will offer a look at games scheduled to launch in 2019. Viewers can watch it in their local language by visiting Nintendo of Europe’s E3 2019 website.

For the most up-to-date information about Nintendo’s presence at E3 2019, keep an eye on Nintendo of Europe’s E3 2019 website.

E3 2019 kicks off at 20.00 CEST on 8th June with competitions featuring top players of Super Smash Bros. Ultimate and Splatoon 2 from around the world, including Germany’s Team Ehre and European Splatoon 2 champions Alliance Rogue from France. Returning activities during the week include a Nintendo Direct presentation in the evening of Tuesday 11th June, and Nintendo Treehouse: Live, a daily livestream from E3 featuring live gameplay and in-depth analysis of games featured at E3.