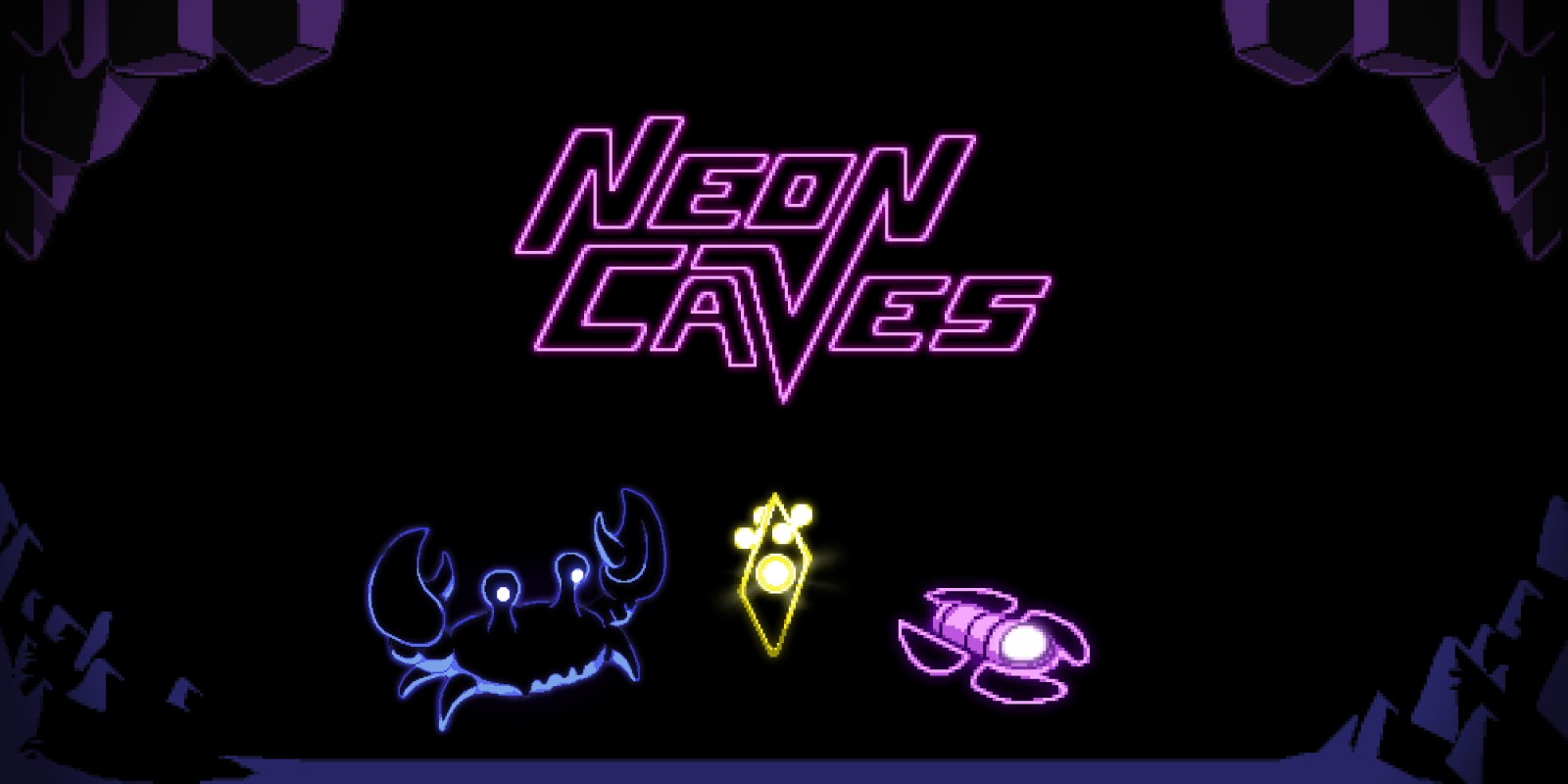 If you have ever played a mobile game called “Toast Time,” you might be familiar with Bristol (United Kingdom) based developer Force of Habit. While a fair share of their releases have been mobile games, some have graced the links of Steam and as of March 2019, Force of Habit is now in the business of bringing games to Switch, including their very own Toast Time.

Like a number of simplistic arcade shooters, Neon Caves does have a bit of a story to it and it is comprised of a research team that has discovered an incredible cave. As the player, your job is to take control of a ship and fight the hostile cave dwellers and try to survive for as long as you can.

Being a shooter game, gameplay primarily consists of aiming at enemies and blasting them, before they can hit you and deplete one of your lives. How Neon Caves differs to most shooters however, is every time you open fire, your ship will be sent flying in the direction opposite of where you fired.

Because of this ricochet gameplay, this is where the true challenge aspect of the game comes into play, but you can offset it by holding the likes of the ZR button, to anchor yourself in place. (For firing, hold A to continuously fire and use the left stick to aim.)

Granted anchoring yourself is only a temporary solution, it will certainly enable you to line up your shots and whilst anchored, you will actually score more points due to a score multiplayer. To end an anchor yourself, simply release ZR and allow yourself to fall, unless you hold ZR again to secure yourself in a new spot.

There will be some instances, such as in the tutorial, where you will want to anchor yourself in a healing circle to recover health, but if you’re thinking Neon Caves is a simple affair, you’d be wrong to do so.

While gameplay is comprised of waves, it’s not just the blue coloured enemies you have to watch out for. During each wave, golden shards will appear and unless you can destroy them all, it’s game over. You will be given a score based on your performance and start again from the beginning on your next playthrough.

In the event you are able to shoot them down, you can proceed to the next wave and repeat the process, only it doesn’t take long for the Neon Cave to introduces you to new dangers and proceed to other areas where moving frequently is the only way to survive.

As way of ensuring the player has a bit of a chance in this mostly one-sided fight, there are power-ups available that will induce rapid fire, activate invincibility, drop bombs and then there’s Ghost Ship. To activate them, shoot the green objects when they appear on-screen.

On the subject of content, Neon Caves is a little light. There is a small tutorial, online leaderboards, nine unique enemy types and one endless mode that makes up the campaign. What helps to give the endless mode some replay appeal however, other than the appealing gameplay, are 28 supported achievements.

If you have skill, you could earn them all with relative ease and if you don’t, but are willing to take the time and develop the required skill, hours of endearing gameplay awaits.

Featuring music by Joe Williamson (Temple Toad and Werewolf Tycoon,) while it’s not the most memorable thing ever, the upbeat tempo does do a good job of getting me into the mode to shoot everything in sight or die trying and in this case, it’s enough.

On the surface, Neon Caves looks like your typical run-of-the-mill arcade shooter with a pixelated aesthetic, but did you know that the setting for Neon Cave is inspired by a real world location? Not only is it true, but the source of inspiration is the ecosystem of the Movile Cave in Romania.

The cave is filled with poisonous gases and a range of bizarre creatures, which includes waterscorpions and its creatures such as those that also helped to inspire designs of the enemies encounterable in Neon Caves.

As for performance, as an arcade game, the action is fluid and I never noticed an instance of the framerate dropping and the controls did exactly what I wanted them to do, so Neon Caves does handle itself nicely.

I must admit, just in case evil jellyfish and turtles and everything else wasn’t bad enough, I do like the fact that players will need to also be careful of falling rocks as they too can eliminate one of your lives if you’re not careful. So, if you have a second to spare, either move quickly, or shot the rocks while you can. Unless of course, you’re attempting a specific achievement that includes getting hit by rocks.

What’s more, should things like playing in Vlambeer mode, or disabling HD Rumble take your fancy, you can easily make the changes to suit your tastes, but after five runs with vlambeer, it just wasn’t for me and I reverted back to the default.

Compared to other shooter games available on Switch, Neon Caves feels light mayonnaise, yet it’s a fun affordable game that you can completely give yourself over to during days when time is not on your side and five minutes is all you have to spare.