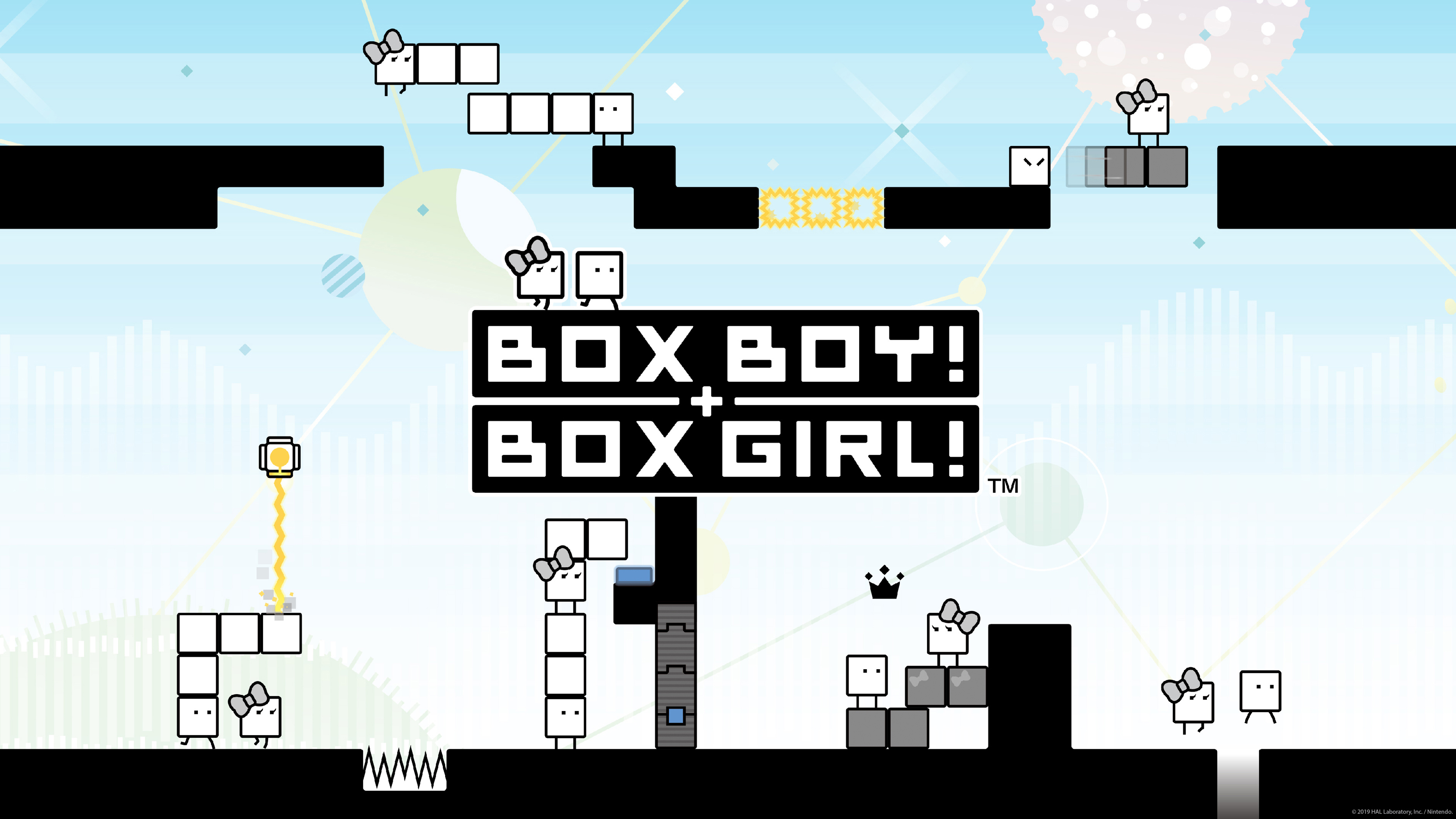 It’s time to square up and box up in BOXBOY’s latest adventure! Developed by the leads behind the Kirby franchise, BOXBOY! is a puzzle platformer centered around using boxes to maneuver through landscapes (such as electric fields or lasers) and despite the BOXBOY! series only being around for a short while, it has already developed a cult following due to the games’ easy to pick-up nature and ease of play.

The original title released back in 2015 on the Nintendo 3DS to quick acclaim, leading to two other installments coming to the console in 2016 and 2017 respectively. With the 3DS relying on its dual screen technology and portable nature, the games felt at home on the console, but does the transition to the Switch feel as natural or should the titles have stayed exclusive to the 3DS? Let’s find out!

Similarly to most puzzle platformers, the real spotlight of BOXBOY! + BOXGIRL! comes from the gameplay, not the story. The story is quite simple, as the game begins by showing a peaceful civilization of box people, ranging from children of different colors, shapes, and sizes enjoying their life. Suddenly a terror ensues causing black meteor-like objects to crash onto the land, turning the landscape into a mundane black and white playground.

Some of the children have even turned into blocks, and it’s up to Qbby and Qucy to return peace to the land and bring everyone back to how things were before the darkness arrived. Each of the three main modes has a slightly different take on the events leading up to the story unfolding, but the events that follow are relatively similar to one another.

Players can choose whether to play as Qbby (BOXBOY) or Qucy (BOXGIRL) throughout the main single-player campaign, with both being playable in A Tale for Two, the co-op campaign, which is also the series’ first multiplayer mode. Besides these two main modes, HAL has also packed in a brand new adventure featuring Qudy, the tall one.

It’s all about the name of the game, and that’s placing and moving boxes freely in order to navigate through the levels. Boxes can be placed to the right, left, or on top of the character you have chosen, which can be either BOXBOY or BOXGIRL.

The game is jam-packed with puzzles to move through, forcing players to think outside of the box to figure out where (and how) a box should be placed to progress forward. Boxes can be strung together to form stairs of many shapes, and can even be set-up to be used as an umbrella.

Each stage has a different amount of boxes that can be used per sequence, some limiting the player to two boxes at a time whereas more involved levels down the line enable the use of upwards to eight boxes at a time. Although it’s fairly simple to place boxes, the controls are slow and clunky, making the process of placing five boxes at a single time accidentally quite easy to do.

To completely finish a level, the number of boxes used per level must be within the allotted amount where each box used in a level is accounted for. Mistakenly placing a box or two will add to this counter and potentially throw off your perfect run. This caused me to reset multiple times so that I could complete a level while obtaining all of the medals.

Luckily there is a quick reset within each level which will place you at the last checkpoint, but remembering to do this each time I accidentally placed a box or two was difficult to do. Completing each level fully under the demonstrated circumstances will grant the player with medals which can be used to purchase an array of items.

Besides just using boxes as a way to complete a puzzle, they are also used as platforming pieces created by the player. At its core BOXBOY! + BOXGIRL! is a puzzle game, but hidden behind the puzzle aspects is a fun platforming element which adds to the strategy behind solving the levels and reaching the end.

Buttons to unlock doors may be too far from the next step to work with, so precise placement and creation will bring you the extra step that was needed to move along.  Once the first few tutorial-like worlds have been cleared and the hand holding begins to fade to black, the game opens up and slowly unleashes the uniqueness to the player.

The ability to string together boxes as a method of reaching the peak of a platform or for reaching a crown provides a useful asset when climbing through the levels. This new ability serves as a ladder of sorts that transform the playable character into a snake, allowing for new heights to be reached and for puzzles to be cleared in multiple different ways.

As players progress through the games’ many worlds, more abilities like slide will also unlock as yet another way to press buttons and venture forward. This ability allows BOXBOY and BOXGIRL to perform actions such as throwing boxes across platforms to hit switches from far away and to stack boxes where it did not seem possible.

In total, the game features a robust 270 unique puzzle platforming levels, a feat that has yet to have been reached in any other installment. For the ultimate BOXBOY! experience, look no further, as this game has more to it than first glance will reveal.

The monotone look of the game may pull some away as the visual look may not be up to par with other games in this genre on the system, but the aesthetic does its job. Each mode consists of a multi-hour campaign that kept me hooked for hours on end.

Each level consists of at minimum one crown collectible. These are similar to the Star Coins found in the New Super Mario Bros. series and can be used to fully complete a level and earn extra medals and points. Having the series playable on your television made puzzles easier to clear as the majority of the level could be seen. It was a nice change of pace from what the 3DS had to offer.

The game can be played with up to two players in the co-op adventure A Tale for Two, which provided the same balance of challenge and fun as did the main campaign. Not much is changed here and levels feel rather similar to what is featured in the single-player mode, but it’s always nice to have the option to play with a friend alongside you by splitting the Joy-Con.

BOXBOY! + BOXGIRL! also features an in-game shop, which players can visit and spend medals on costumes, comics, accessories, and much more. Costumes do nothing more than adding a visual effect to the character, but it adds to the charm that these games are known for. Short on medals and not looking to continue on your journey just yet? Balloon Challenge has you covered, if you get all ten balloons before the time runs out, you’ll score extra medals needed to grab another costume to add to your collection.

Soundtrack wise, BOXBOY + BOXGIRL! comes on the lighter side when it comes to the diversity in tracks and compositions. All of the levels play tunes that are slightly different, but they fit into the overall theme of the game. This is the type of game where a grand soundtrack would feel out of place, especially since it would clash with the minimalistic approach that the series has become synonymous with.

When opening up the game for the first time, it would be wise to approach the game with low expectations in the visual department. Bottom line, the game is nothing fancy. Everything is in blacks and whites, including the characters and the landscapes. Occasionally you will run across lasers that are colored or dirt sections that are designed to look like concrete, but most of the game is minimalistic in its design. The aesthetic gives off the belief that the game will be a breeze, but it can be quite a challenge at times.

For a Nintendo release, the overall performance and specifications of the game fail to surprise me. It runs at a steady frame rate and resolution with quick load times all across the board. Entering and exiting a level only takes a few seconds to accomplish, and the same can be said for the rest of the areas which require load times. All transitions are quick and easy, and I ran through zero issues throughout my playthroughs of the different modes.

At its current price point, BOXBOY + BOXGIRL! offers more value than the majority of games in this genre already on the eShop. It plays very well both in handheld mode and while docked, and playing with a friend in local co-op is a bonus to the experience. Do not let its looks deceive you, as the game does offer some challenge when attempting to obtain all of the crowns in the level while also attempting to use the least amount of boxes possible.

Also, customizing your preferred character with the dozens of costumes available in the game is fun and adds a reason to return to levels, adding even more to all the fun left to be had in the game. Besides a few personal nitpicks, this is one of the better puzzle platformers available on the eShop that can be enjoyed by almost anyone.

BOXBOY + BOXGIRL! is the definitive installment that the series desperately needed to gather mainstream attention, nailing all of its challenges straight on the head from start to finish. It’s packed with hours upon hours of content, and playing the game with a friend is both a blast and a challenge.