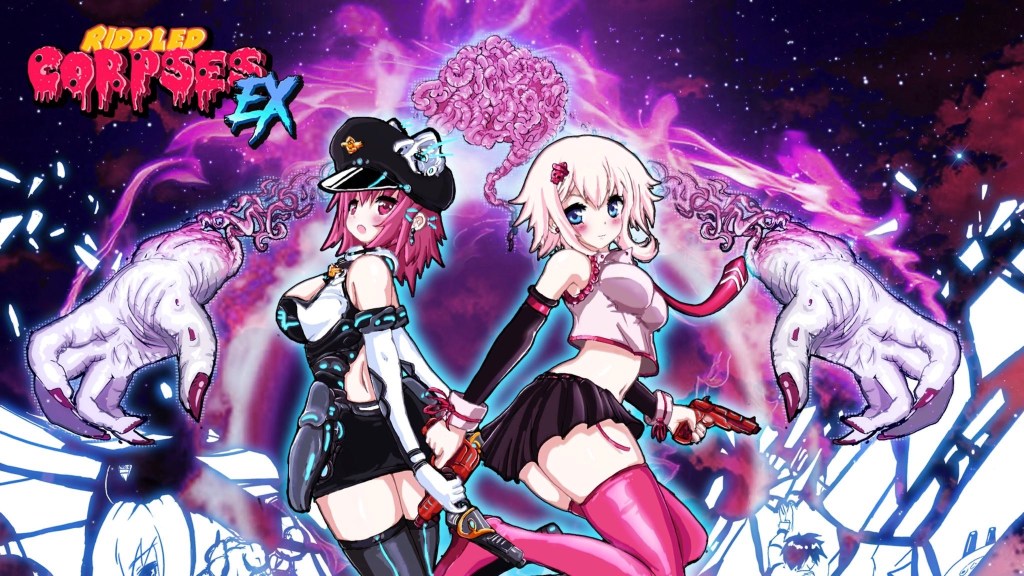 Destroy the root of evil by any means!

There are no shortage of twin-stick shooters on the market, but I still find myself coming back to them for the great gameplay and action-packed combat. Developer Diabolical Mind’s twin-stick arcade style shooter Riddled Corpses EX is definitely reminiscent of the classic 8 and 16-bit games of the past, but has been injected with some modern game design. The learning curve is incredibly steep all the while having gameplay that is immediately accessible.

Riddled Corpses EX is a frantic twin-stick shooter with a retro graphic style that’s able to be played with two players locally, and unfortunately, there is no online mode. You start off with one playable character with all the others needing to be unlocked by either beating the title or by using your money earned in-game to purchase them. Every character starts off at level one and you’ll level them up by using the money you earn from defeated enemies and objects in the environment.

This money can also be used to upgrade the characters you currently have with every upgrade you buy, increasing the amount of money needed for the next upgrade. You will find early on that you will have to grind through the same stages multiple times in order to finally get through all of Riddled Corpses EX levels.

Three main modes are available from the start: Survival, Arcade, and Story modes. In story mode, you’re going through the main levels in a linear style with some narrative present in between levels. You will notice that there is a horde mode mentality to the combat with every level being broken up into multiple waves of enemies that you’ll have to defeat. Basically, you’ll defeat a wave by either getting rid of all the enemies on the screen or just waiting until the meter at the bottom of the screen ends up depleting.

Either way, once the wave is complete the level will start to auto-scroll and enemies will still filter in until you get to another stopping point where you take on the next wave. Some waves include mini-bosses that you’ll have to deal with and at the end of each stage is a main boss, which is usually huge. The bosses are one of the best parts of Riddled Corpses EX with many resembling more of the bullet-hell sections you would find in shmups (shoot em’ ups) and provide a great challenge while also being enjoyable. They can break apart and go into multiple different forms all in one battle making for something that’s very intense.

The other modes include the Arcade mode, which is mostly just the story mode only in an arcade format with high scores and leveling up as you defeat enemies. Survival mode drops you into a random arena with wave after wave of randomly generated enemies coming towards you and your goal is just to survive for as long as you can. The mode itself isn’t that interesting, but because you’re able to grind more money in it this makes for a great way to gain a few extra levels before jumping back into the main story.

My only real issue with Riddled Corpses EX, besides that relatively short length, is that it uses the short length to become an absolute grind-fest. Even if you’re really great at twin-stick shooters, you’re probably going to get overwhelmed before level three if you’re just starting at level one and trying to progress naturally. Because of this, it is very easy for you to just spend hours playing the same levels or arenas to have enough experience or money to either unlock new characters or just leveling up the character of your preference. I found that unlocking the character that uses magnetism essential to unlock early on for making it easier to collect money.

Riddled Corpses EX may be repetitive, but it certainly is fun to play with a friend. While it won’t have the lasting power of some co-op indie titles, the twin-stick shooting felt much like Smash TV with constantly being bombarded by enemies and coins/items to collect. It’s meant to be played in multiple sessions, as you’re probably going to get bored before seeing it through to completion.

Riddled Corpses EX is a fun twin-stick shooter for about thirty minutes to an hour at a time. It’ll probably take you several more hours to actually get through everything, but most of that time is going to be spent grinding the same areas and enemies multiple times. If you have a friend to join you, not only will Riddled Corpses EX be more enjoyable and less of a grind, but it will also be easier because it definitely helps out having someone else shooting with you.