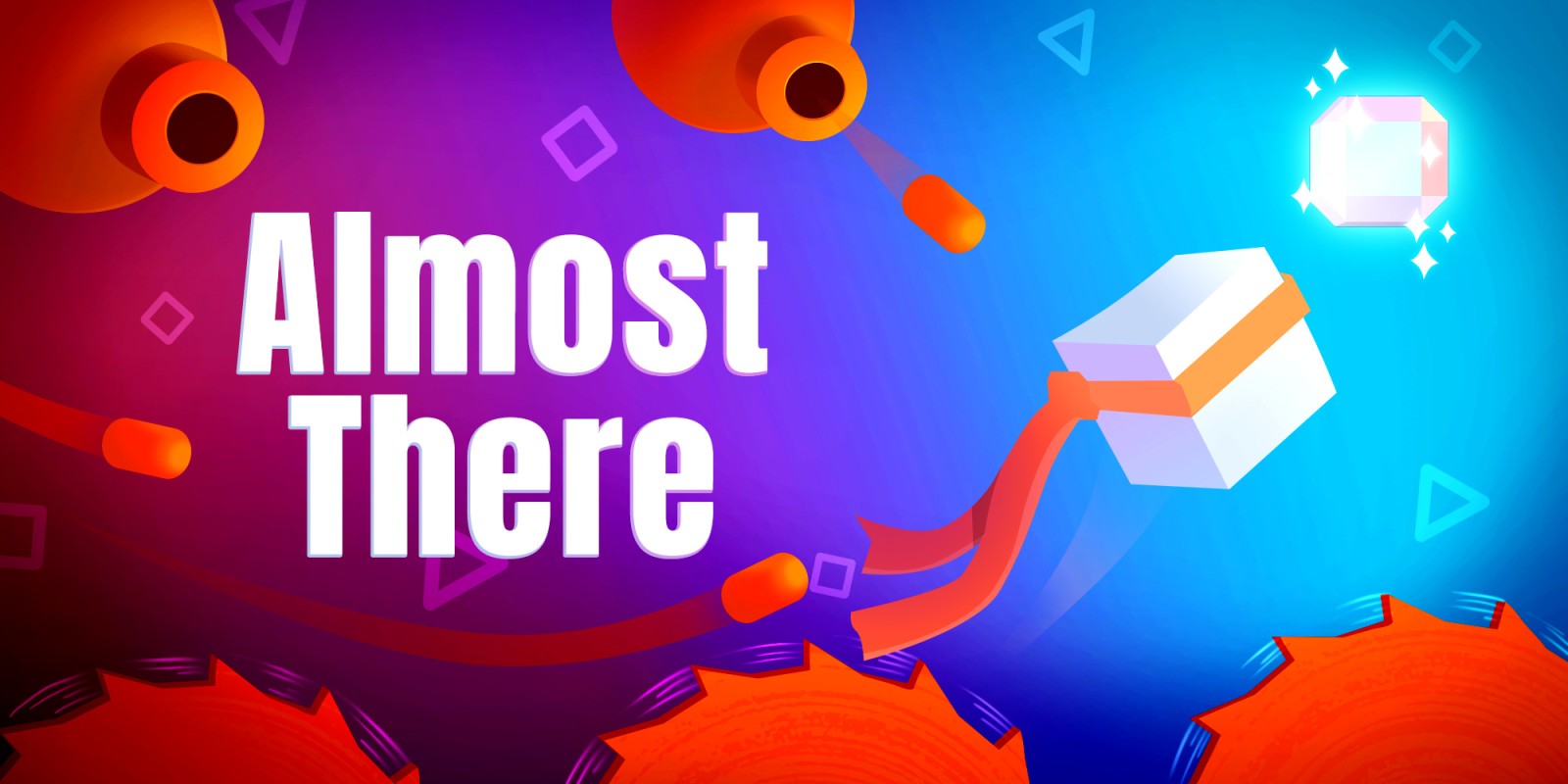 Platforming right at your fingertips!

Almost There: The Platformer, from developer and publisher The Quantum Astrophysicists Guild, is one of many minimalistic platformers to grace the Nintendo Switch. This presentation lends itself well to other simple, yet challenging platformers such as Super Meat Boy and N++ to name a few. While this simplicity can be seen as a hindrance, it’s in these concise levels of increased difficulty that Almost There may be worth some of your attention.

In the opening levels, your goal becomes apparent through the simple, yet challenging level designs of creator Bony Yousuf. There is no story and each level is a short affair of just getting to the end of a level. You play a simple cube with a ninja-like bandanna and are told what different hazards and control methods do, through the natural course of gameplay. There are no intricate backgrounds teeming with life, only a simple light color palette that does well with the simple nature of the gameplay.

When you complete a level you are awarded a star rating between one and three. The faster you complete a level the higher your star award will be and this is where the additional challenge will come. You will always just earn one star and that is always enough to progress to the next level. This means even the harder levels can be completed, but even earning one star can sometimes prove elusive on the more difficult levels.

These bite-sized levels, of which there are 155 deviously designed stages, make Almost There a great portable title. This is the perfect game for pick up and play platforming, and as you progress the difficulty ramps up with new elements and challenges introduced. Generally, the new hazards and obstacles start out with simple implementations, but soon you’ll be trying to avoid increased lasers, other geometry shaped enemies, and pitfalls.

Almost There succeeds in providing a platforming experience that showcases skill and finesse with movements. Even being as a simple cube, you are pretty nimble and controls were responsive and fluid, if not somewhat heavy with the physics. You feel like you’ve accomplished something when you set a new faster time on a level and this sense of enjoyment was never lost in my playthrough. That being said, there were no leaderboards as of my time for the review and I felt this was a missed opportunity to further encourage you to get a faster time for showing off your platforming skills.

As stated before, controlling the cube is simple and intuitive. Basic moves are pulled off with split-second timing and usually, they need to be as every movement matters. Some levels require you to climb up and this requires you to cling to vertical surfaces as you go. Thankfully it’s a simple process as you push into the surface and then leap across to the next where you can just repeat. Hang for too long though and you’ll start to slide slowly back down, so don’t be thinking you’ll have time to rest.

I also appreciated some of the unique control elements Almost There offered, such as being able to essentially do well-timed wall jumps in the air without needing a wall and the aforementioned slow and steady rate you can slide down walls. You can combine multiple uses of these platforming elements to change the way you go about finishing a level and it makes for a more original platformer at least. Unfortunately, I wish there was more originality in the types of obstacles and general hazards you face, such as with the lasers, saws, spikes, generic enemies, and many other elements that too closely resemble other platformers.

The one thing that felt somewhat off for me with the control scheme was that in order to do a long jump you’ll have to run for a while in one direction until you see a split-second flash, and it just didn’t feel right. I wish there was a dedicated button for running, but seeing as this came over from mobile platforms as a one-button experience, this can be forgivable.

Once you get used to the control basics, it all blends together well as usually it hits by the time you reach the ledge’s edge anyway. You will have to sometimes go backwards, or left, when on a platform to have enough room to speed up for the longer jumps. However, if you have been playing platformers over the years (I’m sure you’ve played some Super Mario titles on the Switch), it should become second nature.

Almost There: The Platformer is what exactly what the title says it is, nothing more or nothing less. Some of the later stages were downright brutal and players who like challenging platformers will really enjoy trying to master everything they’ve learned with the control scheme before to conquer these stages. If you love minimalistic platformers than Almost There is for you, otherwise, there’s nothing new enough here to change your mind.