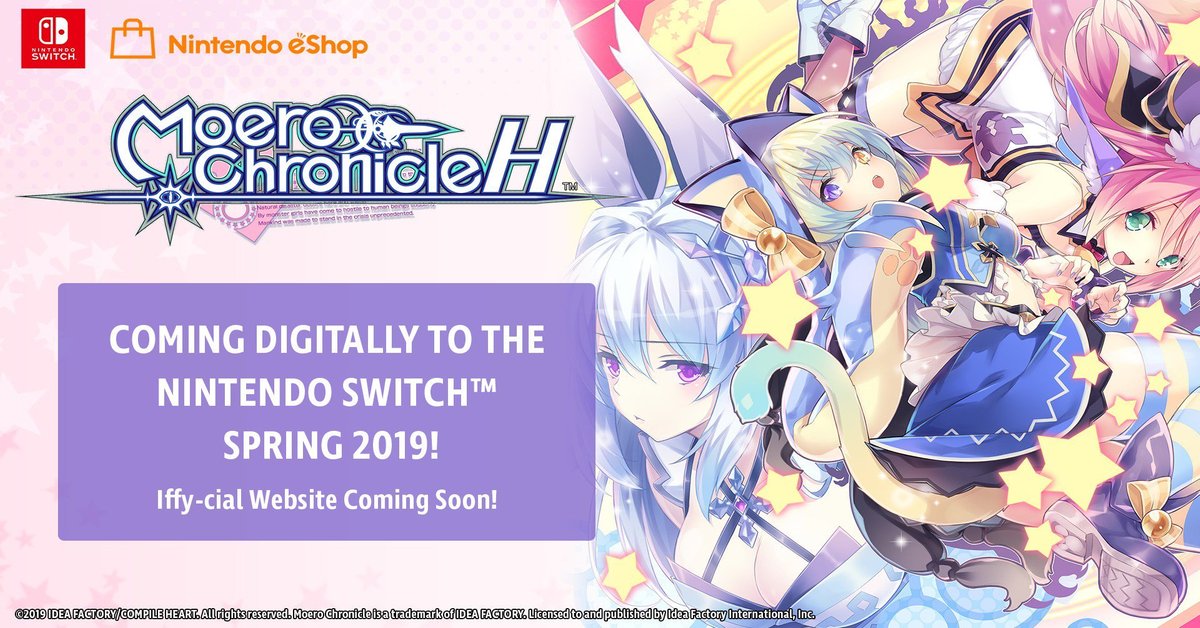 The dungeon crawling RPG game featuring Monster girls is coming to the Nintendo Switch. Moero Chronicle Hyper will be coming some time in Spring 2019.

We have the official press release below with more details and the story of Moero Chronicle Hyper.

HEADS TO THE NINTENDO SWITCH™ SPRING 2019

LOS ANGELES, CA., February 1, 2018 – We are happy to announce that the dungeon-crawling RPG Moero Chronicle™ Hyper will now be arriving on the Nintendo Switch™ via Nintendo eShop™ in Spring 2019! The Switch release will be remastered in HD and will also include four features:

Originally released as Moero Chronicle™ in Japan and Asia on the PlayStation®Vita system, followed by a 2017 Western release on Steam®, this dungeon-crawling RPG asks, “How cute can a monster be?” Fight through dungeons, recruiting Monster Girls, and building relationships with them in order to solve the mystery afflicting the denizens of Monstopia!

Story
Io is a simple young man with only one problem – he can’t talk to women! Any attempts at conversation are destroyed by his perverted mind, except when he talks to Lilia, his best friend and a Monster Girl.

However, that becomes the least of his problems when he’s tasked with going to the dangerous region of Monstopia. There, Monster Girls have begun rampaging, causing wanton pain and destruction. Have the Monster Girls simply gone mad, or is there an even greater evil afoot…? Find out in this moe-filled dungeon RPG!

Moe Monsters Moe Problems! –
Recruit 50 Monster Girls, each with unique skills and traits, to fight for you! You’ll have to wear them out in battle first though!

Can I Kick It? – Build your relationship with each Monster Girl through special events, gift-giving, and even home improvement to increase their powers and abilities!

Trait Flexin’ – Strategize your 5-person party by keeping their Moe Traits in mind – when combined together, you can recover after battle, increase your party’s attack, and more!

Nothin’ Wrong with a Little Bumping Scratch! – Purify your Monster Girls and return them to their senses with “Bumping Scratch”! Find their points of weakness on their body and touch, rub, poke, or pick until they’re purified!