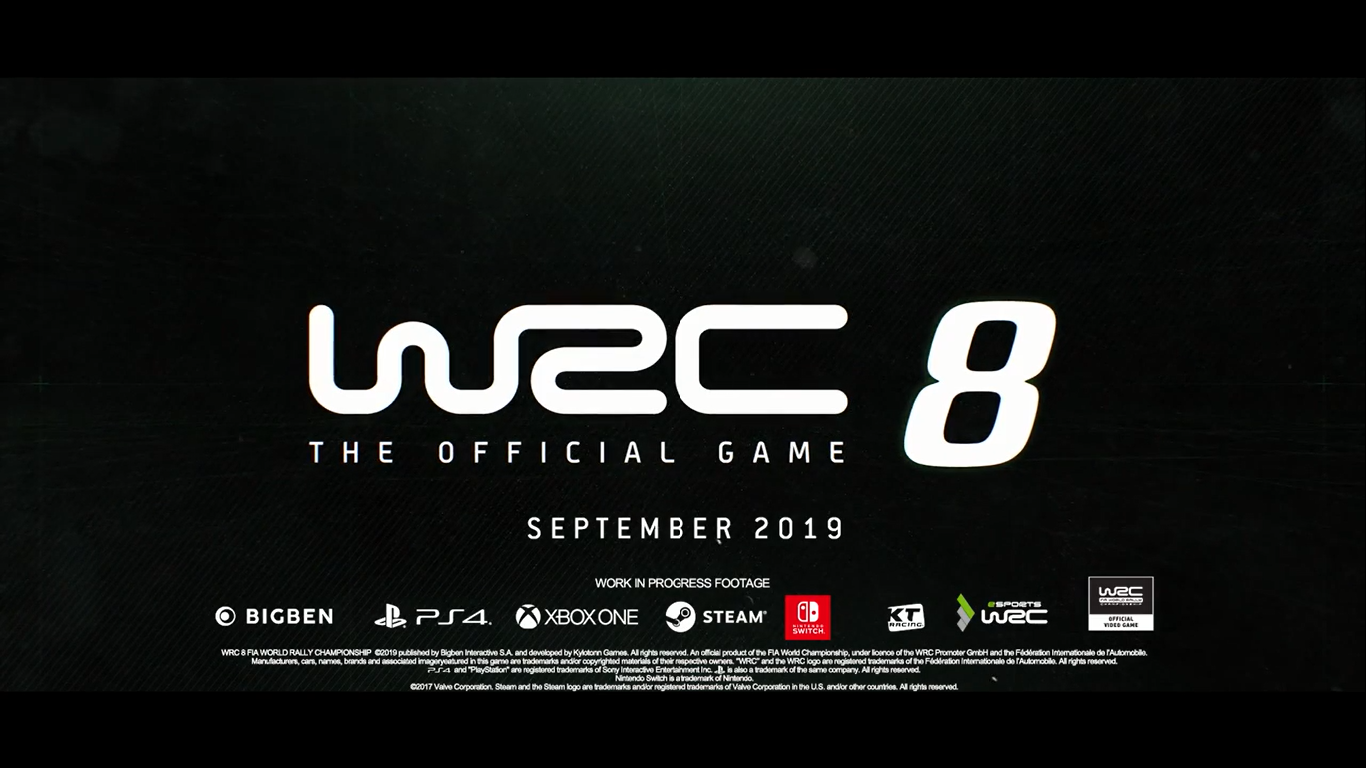 Has it really been two years since we last had a WRC game? Yes it has, but not to worry, Bigben and Kylotonn are happy to announce that the series is making a return with WRC 8. The World Rally Championships are back again and better than ever. Community Feedback on the last game has enabled the developers to make necessary improvements to make WRC 8 the best Rally experience. WRC 8 will be heading to Nintendo Swich, PS4, XBox One and PC sometime in September 2019.

Below we have the official press release and a first look trailer for the game as well.

Lesquin, France,  January 24, 2019 – After a two-year absence, the legendary WRC game is back. Bigben and Kylotonn are pleased to announce that WRC 8, FIA World Rally Championship (WRC) 2019 official video game, will be available in September for PlayStation®4, Xbox One, Nintendo Switch and PC.

Thanks to the community’s feedback and the pointers from the eSports WRC Championship, Kylotonn has taken advantage of this period to improve all aspects of the game: better graphics, more technical routes, smoother pace notes and a more comprehensive career mode. WRC 8 will go above and beyond WRC 7, especially in the steering requirements and the realistic physics of the vehicles.

While the WRC enjoyed an epic season in 2018, with the destiny of the drivers’ title only being decided on the final morning of the season in Australia, 2019 is already shaping up as another fascinating year. In WRC 8, players will be able to choose their driver from the official teams of the 2019 season marked by the return of Sébastien Ogier (6 times World Champion) from Citroën Racing, accompanied by Esapekka Lappi, while Toyota will try to defend its 2018 manufacturers’ title with Jari-Matti Latvala, Kris Meeke and Ott Tänak. 2019 is also marked by the return of the nine-time World Champion and WRC legend, Sébastien Loeb, driving this year for Hyundai Motorsport in support of Thierry Neuville, Andreas Mikkelsen and Dani Sordo. M-Sport Ford, will rely on Elfyn Evans and Teemu Suninento draw attention again.

WRC 8 will also offer a selection of WRC 2 and Junior WRC drivers as well as a few historic models to be revealed very shortly. Talent and concentration will be needed to overcome more than 100 special stages taking place in 14 countries. Upgrade your car to unprecedented new levels of detail and develop your team in an in-depth and intense career mode.

A new dynamic weather system has been developed to add random elements to the driving experience, but also to increase realism in the game. Managing the weather is a real challenge for the drivers: modified grip, car settings adjustments, tire selection optimization, weather team relationship to ensure the best tips and information on the latest conditions. More than mere visual effects, climatic conditions become crucial, especially in the management of your career.

Play as the best drivers in the Championship and experience the competition as if you were there!

WRC 8 will be available in September 2019 on PlayStation®4, Xbox One, Nintendo Switch and PC.