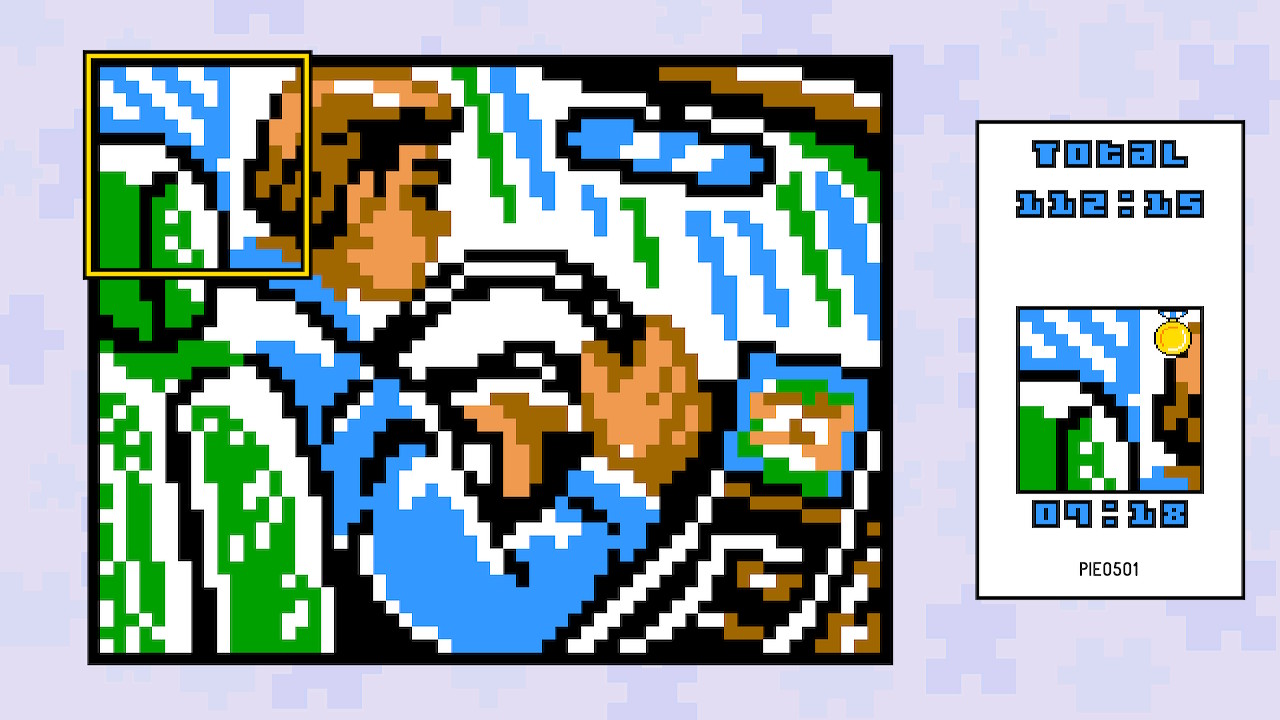 January 23, 2019 3:27 am Published by jonathanober Leave your thoughts

Pic-a-Pix Pieces released early in January 2019 for the Switch and is a continuation of the Pic-a-Pix Pieces series which has seen releases on 3DS and Switch. Pic-a-Pix Pieces combines aspects of Picross/Nonogram style puzzle games where you use logic and deduction to create an image from numbered rows and columns.

One main difference between the Pic-a-Pix Pieces game over its previously released games is the style in which the puzzles come together. Instead of each puzzle being a singularly created object or item found within the world, the puzzles are smaller sections of a larger image. Hence the titles subheading, Pieces.

The piece aspect of the game is enough to make solving each puzzle a bit more difficult as the puzzles themselves aren’t recognizable pixel art you would find in the black and white Picross series or previous Pic-a-Pix games.

In terms of gameplay, Pic-a-Pix Pieces is relatively simple. You move around the board, of 5×5, 10×10, 15×15, and 20×20 using the left joystick. Each pixel of the puzzle must be solved by either assigning a color or marking it as empty with an ‘x’ mark.

The puzzle mechanic, at least in the beginning is very simple, though the challenge quickly escalates as completing individual puzzles begins to take 10-20 minutes or more. As you begin to figure out some of the puzzle completion strategy, you will find yourself quickly switching through colors and completing puzzles by second nature.

Since the puzzles are the only objective of the game, you may tire easily from them, and Pic-a-Pix Pieces is best played in short burst and over a few weeks as a form of relaxation,  but because there aren’t a lot of controls or difficulty even in the longer puzzles, your love for a game like this may vary. Also since the puzzles are pretty much once and done the replayability is a bit low, unless you want to try and better your score and get gold medals on each puzzle.

In terms of content, there are 300 puzzles in the base game for you to complete, as well as two DLC packs, the 15×15 and 20×20 Piece Packs that add 96 more puzzles to the game. Since the names are subtitled Pack 1 for each, I can only surmise that there may be more puzzle packs added in the future.

There is also a tutorial if you are new to the series, which walks you through some of the logic help and tricks in order to complete puzzles quickly. The Switch version also has links to the demo content which you can download which included a couple of holiday-based puzzles.

If there is one complaint about Pic-a-Pix Pieces that I have, it’s the music. The background music, which thankfully can be turned off, is a droning bit of chiptune/8-bit style audio that is annoying. I quickly turned off the music as there was no need, in my mind to have it playing along.

The Pic-a-Pix series, as well as recent non-Nintendo licensed Picross games, are just bland when it comes to the actual images you are completing. If these games wanted to sell more, they should try and join with Nintendo to create something similar to the Pokémon or Zelda picross games that were released on the 3DS.

Pic-a-Pix Pieces is a challenge set of puzzles, albeit, very simple artwork and puzzles that ultimately fall flat because their subject matter is boring. The series is better because of the ‘piece’ aspect in the title which doesn’t allow for the ‘logic cheat’ to happen as often. What I mean by that is if you know it’s a real-world object and how it should look you can sometimes guess how the image should look, whereas in ‘Pieces’ you actually have to use logic to solve the puzzles.

Overall the package of puzzles is challenging and rewarding to complete, but in small spurts, as you’re likely to be numb from long game sessions. In the hands of a puzzle enthusiast though, you can’t go wrong with Pic-a-Pix Pieces on the Nintendo Switch.