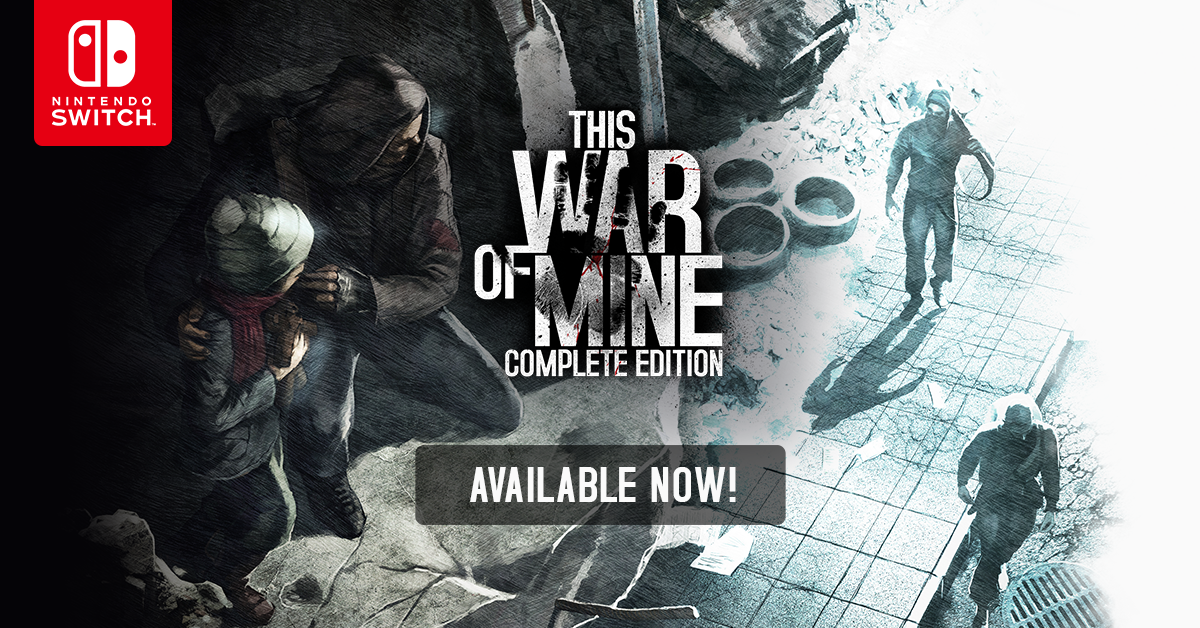 [Review] This War of Mine: Complete Edition (Nintendo Switch)

The real face of War…

When we play a game like Call of Duty, Battlefield or Command and Conquer, we are dropped right into the war as we fight our way to kill the enemies and make sure that our country or side is the one that comes out on top at the end. However, what these games show is merely a tiny fraction of what a War really is. While many soldiers fight in the frontlines, the civilians that live in combat areas are living some of the worst days of their life, as the expectation of dying lies around them each time they breathe.

Developed by 11 Bit Studios, This War of Mine is a game that came as a way to bring us into this reality and shed some light into the horrific things that can happen during a war. Originally released in 2014, it now comes to the Nintendo Switch in the exclusive Complete Edition that features all the content already released for the game and will be updated for free with all those yet to come.

Visually speaking, This War of Mine had to represent the horrors of War for the civilians, but at the same time, show the world in a way that wasn’t as real and ugly as it can really be. The solution found was to represent the world as if it was pencil drawn, and the results are one of the best ways they could to appeal to both aspects while also having some artistic liberty. Everything is very easily understandable, allowing to understand the new environments that you run into at first glance.

The characters also follow the same visual identity of the world and can still be easily identifiable in the black and white world, but they also have a neat distinction: On the bottom right of the screen, you have the character stats, and with that, you have a real picture to help you sympathize even more with him or her. This action was a smart move as through these pictures and character descriptions, you can get to know more about the people that you are in direct control of and their past, making most of the player more sympathetic towards them.

The visuals were very well done, but what really caught my attention and that shows the amount of care that really went into making this game is the sound effects and the melancholic music that goes with it. These two things set the feeling of sadness and desperation since the first moment that you play it and are a constant reminder that the world and war around you never stops. Bullets are constantly being shot, people sometimes cry or have a dreadful expression that is conveyed through the sound effects, which I can still remember even with the game turned off.

When you start the game, you have 2 modes to choose from: The original one and the episodic DLC campaigns. Even though each is a different mode, the gameplay structure is similar in both modes.

The basic gameplay style sees you controlling one or more characters and having to deal with the various natural human necessities such as hungry, tiredness and emotions, as well as dealing with the conditions that war imposes over the world, such as difficult locomotion during the day, the scarce quantity of food, equipment and medication, and night attacks from scavengers.

Each survival day is divided into 2 parts: the day and night segments. In the former, you have to take care of the place you are and the inhabitants, by carefully deciding who eats, who sleeps, who searches the house for supplies. You also have to deal with the human relations between the members and the occasional visits from sellers, neighbours or other strange figures.

During the night, you have to decide who stays and sleeps, who stays and keeps watch and who goes out to search for supplies. Then, you have to control the character that is searching as he explores the outside terrain with the risk of not even returning.

It is this gameplay mechanic loop that creates a sensation that every decision can have the potential to affect everything around. There were situations that I left a character alone in the house, just to find that our house was invaded and sometimes, that the character was hurt.

Additionally, managing who does what during the day is an important moment as not feeding someone or putting another to sleep can greatly affect his performance on the next day. As soon as you finish all your chores for the day, you can end it to save your time and start the night portion, but I still wish there was a function to just speed up time as one day I had to wait for both of my characters to sleep as I waited for the merchant to appear.

I also feel that this can sometimes end up feeling a bit repetitive, which takes the fun out of playing the game for a long time. But if you are looking for short sections, this game’s loop mechanic fits better and the Nintendo Switch is a perfect platform for that.

Another problem that I have with it is the lack of touch-screen controls. The game only supports controllers, which work very well for a gameplay style that normally works with mouse or touch inputs. But I ran into some difficulties such as when the game kept understanding that I wanted to go down the stairs and I was trying to move ahead. This doesn’t ruin this control scheme but makes me wish that touch screen was an option.

Finally, both modes will offer you great experiences. The original mode offers a random or customizable play session that can easily be suited to what you are in the mode for, with you meeting new characters and situations each time you start over. The Episodic story mode will offer you the first chapter of a story, with more coming up in free updates, that shows more in-depth the tragedies that can happen to a person with a child in the middle of this conflict and may satiate those in need for a more specific story.

This War of Mine: Complete Edition may be the best version of the game yet, especially with all the content so far included and the prospect of all the additional content coming through updates. If you are a fan of management games and even decision making experiences, this is one of the best titles you can ask for and even if you’re not, maybe this can be a good experience to make you like it and reflect more about how horrible a war can really be.