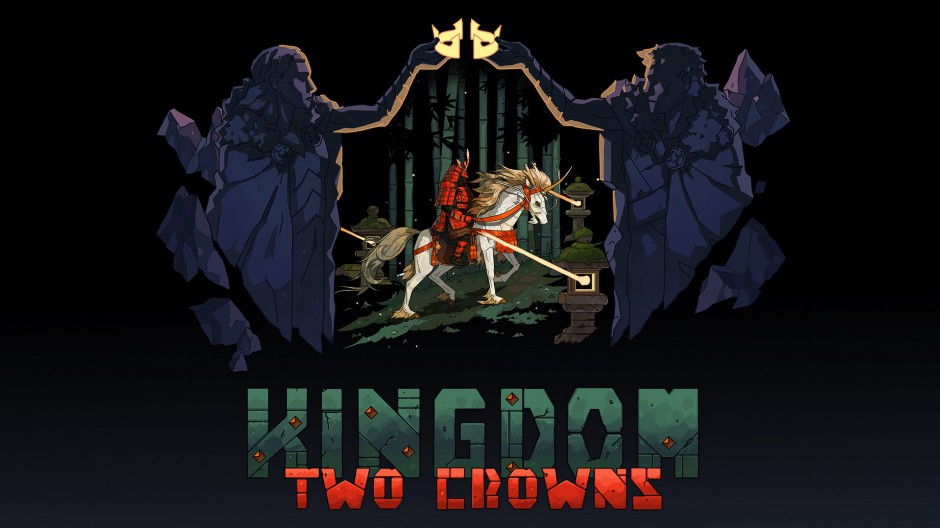 December 17, 2018 7:06 am Published by minusthebrant Leave your thoughts

The Kingdom series first started on PC a few years ago and has had ports to various consoles, including the Nintendo Switch. The reworked new version was known as Kingdom: New Lands and now it already has a sequel from developer Noio called Kingdom Two Crowns. What you have is a simple, yet addictive strategy title that harbors a deeper level strategy than what you might think.

As mentioned before, Kingdom Two Crowns predecessor, Kingdom: New Lands, is also available on the Switch and this sequel is very similar in terms of its basic premise. Two Crowns is a micro-strategy title that involves minimal resource management elements and almost plays like a tower defense game, but set on a 2D plane. The tagline ‘Build, Expand, Defend’ is exactly what you get with Two Crowns. You play as a monarch without a kingdom and in order to rectify this situation you must, of course, build one. You start off by collecting a few gold coins and use these tow recruit people into your kingdom. From there you must manage your land and having your citizens trained in arching by equipping them with a bow or builders by equipping them with a hammer, all the while ensuring that you do not run out of money.

Having builders allows you to construct walls around your base and watchtowers for the archers to occupy. This will be essential for the nightfalls due to what lurks at night. More roles will become available as you play, including farmers and the duties these subjects fulfill, other than building and defending, are how you build up a source of income. You can also pay a trader to scour the land and sell your wares, earning you additional money or you may come across chests in the wild if you’re lucky.

Buildings in your town can be upgraded over time with the ultimate goal being that you must repair the dilapidated ship found somewhere in your kingdom in order to move on to different areas and continue to build up your empire. Kingdom: Two Crowns is very light on tutorials with only an explanation of the basics as the only form of information you’ll get.

The rest is all for you to figure out, but fortunately, it’s not hard to manage all this. It took some time for Two Crowns to click for me due to some underlying intricacies of what needed to be done. Even if you have no prior knowledge of the series, Two Crowns may be somewhat of a slow burn, but if you give yourself enough time to understand the gameplay it does become enjoyable.

When night comes you are attacked by a fearsome group know as the ‘Greed’. They will attempt to break down your walls and steal your resources. Any of your citizens they hit will need to be recruited again and they may also steal your weapons and gold.

Finally, if they hit into you and knock your crown from your head then you need to reclaim it quickly as if they get too far away your reign will be over. Where Two Crowns and New Lands are differentiated is in with the previous game if you lost you’d get a ‘Game Over’, but in the sequel, you can continue as your previous characters heir. This allows for a better sense of progression when compared to its predecessor.

Every improvement for Two Crowns includes the ability to return to your previous island later on in order to improve them, which adds a better sense of progression and closure. Another inclusion is the new local drop-in multiplayer and Two Crowns almost feels like it was meant to be played with two players. It makes traversing the land and getting everything you want to do before nightfall easier.

You do not directly control your subjects and there is no directing them to where you want them to go. While the idea of this is not an issue in and of itself, the AI can occasionally make this problematic. Some soldiers have a hard time not knowing where to specifically go and this can allow for some slip ups with letting the enemy into your lands. By the time you can get everything situated it may be too late sometimes if you could have just had the option to direct some of them.

Controls are extremely simple and movement is handled by either the left analog stick, the d-pad, or the right analog stick. Using your coins happens by pressing or holding down the A button near an interactive object and the ZL/ZR buttons make your horse gallop faster. Playing in two player gives both players the option to use a Joy-Con, which means you don’t have to buy another set of controllers and is a welcome addition. This is a perfect example of Two Crowns not overburdening you with things to do and it is better for this.

The overabundance of video games using pixel-based art has led to the style being considered lazy or an easy way to build a title. There should be a clear distinction though, as surely not all pixels are equal? Thankfully, Two Crowns manages to use the pixel art style very well representing something that wouldn’t have been possible in the era that its style was emulating. This is just as innovative and impressive as anything Nintendo has released on the Switch and ranks up there with Octopath Traveler and Hyper Light Drifter in beauty.

On top of this, the music is absolutely spellbinding. The soft piano melodies exude tranquility and I loved the way each track seemed to weave in and out of the title. This largely added to the gaming experience and all music stops at night when you are under attack and each new morning is greeted by the toll of church bells welcoming in another new day. Also, the sound effects of the rain falling and thunder crackling through the sky immerses you even further in this delightful pixel-based world.

Overall, Kingdom Two Crowns has expanded and improved on the work of its predecessor by adding gameplay improvements and a fun two-player mode. Its core mechanics can sell be too repetitive at times, but its addictive qualities supersede any feelings of tedium that repetition can sometimes invoke. If you are looking for a title with light strategy elements, stunning visuals, and charming music, Kingdom: Two Crowns reigns supreme as one of the Switch’s best title’s.