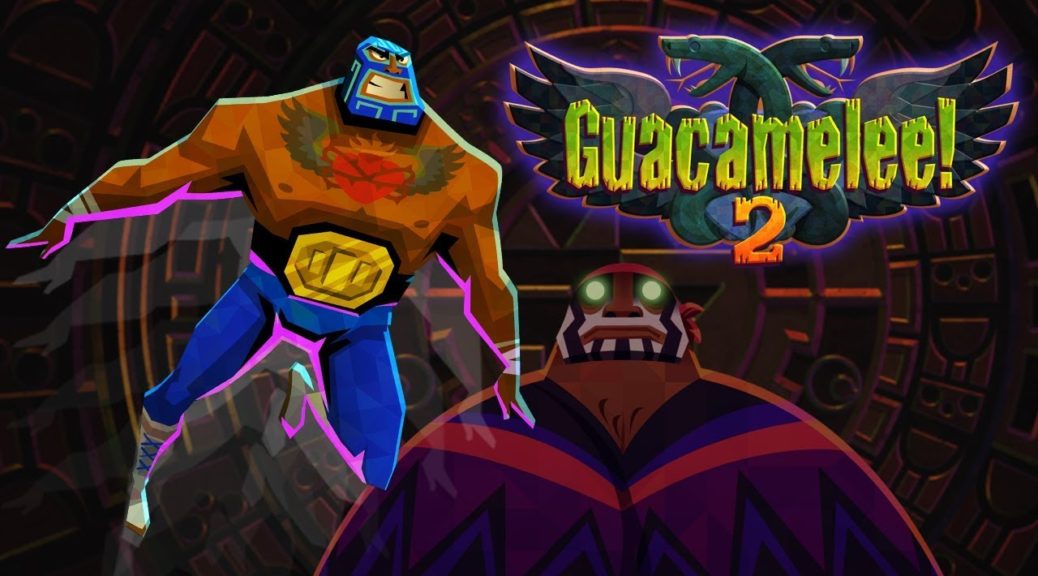 December 8, 2018 3:16 am Published by minusthebrant Leave your thoughts

Metroidvania’s have a long history, with Super Metroid for the SNES laying the groundwork back in 1994 of what the genre actually is. Defined primarily by their 2D precision platforming, vast interconnected worlds and a myriad of unlockable powerups that allow players to explore new areas previously inaccessible. Metroidvania design philosophies have given life to countless memorable experiences; from Axiom Verge, Hollow Knight, Iconoclasts to name a few. Like every other genre template in video games, a Metroidvania is often at its most interesting when it subverts common tropes in order to carve out its own niche.

Guacamelee! 2 is a sequel to the indie smash-hit Guacamelee! that was released back in 2013, and most recently on the Nintendo Switch this year. The changes are subtle, but there are many that immediately flesh out the experience and give this kinetic action platformer even more depth. Whereas other Metroidvanias may slowly and continuously give you a slow stream of abilities, unlocking abilities is almost a constant clip in Guacamelee! 2 and the new powers feel immensely satisfying and limitless in its scope.

The story is set seven years after the original Guacamelee! and once again puts you in the shoes of Juan, now a soft-bellied everyman after defeating Calaca from the first game. However, a threat from an alternate reality where Juan failed his task has taken his place only to become a bigger villain than Calaca. Juan must now travel to the darkest timeline in order to save the now fragile meta-verse from destruction.

Juan’s repertoire of moves is substantially expanded upon allowing you access to out of reach platforms using a fiery uppercut, break through blue blocks with a charging attack, sneak through small crevices as a chicken, or even swap between level altering dimensions with a quick tap of a button. It’s a delightful change of pace from the more traditional entries in genre.

If a Metroidvania is only as good as its power-ups, Guacamelee! 2 is a prime example of how it can be done right. You are given abilities with a playful confidence knowing full well as more are given to you the more fluid the game is as a result. Throwing yourself around the screen is a simple pleasure with movement as fluid and tight as an action platformer should feel.

Although most of the special moves are carried over from the original game, there are plenty new abilities in this sequel too, as well as additional abilities that serve to enhance those that may have been underutilized before. The chicken ability for example, was previously nothing special in Guacamelee!, but in Guacamelee! 2 now has the ability to beat enemies down to size and can launch itself at bumpers like a pinball.

All areas you explore are crammed to the brink with fully designed obstacles to overcome using this quickly aware skill set. Swapping between dimensions reveals new platforms and some of these sections rely on jumping between them in order to navigate a tricky route that relies on multiple abilities to progress. What’s even better is when some of these levels are remixed further, introducing more complies challenges that push the player to their absolute limit. For example, there are numerous areas where both the living and dead dimensions are mixed together via a series of waves that move across the screen offering a brief respite from environmental dangers.

It’s in these moments that Guacamelee! 2 truly shines and is consistently strong in its design from a gameplay consistency to level layouts. The way new ideas are introduced, expands upon them, and then further remixes them is outstanding and even offers optional challenge rooms off the beaten path that represent increasingly more difficult variations of the concepts introduced along the main route. These rewards include additional heartor stamina containers for beating them, or increased gold and other bonuses.

Puzzling passages are interspersed with combat sequences that are as equally energetic as their platforming counterparts with each wrestling type of move doubling as a platforming movement that can help in traversing the environments and create simplistic motions. Additionally, combat can be improved with the skill tree system with buffs and passive abilities that can be bought with the currency you earn throughout your playthrough.

As you progress. Guacamelee! 2’s enemy variations continuously get more complex with new types of adversaries showing up to try and send you back to the underworld for good. Shielded enemies become a common occurrence and need to be defeated by performing a move that can break the shield depending on its color. Also, some enemies can only be hurt by swapping to the correct dimension and while the act of switching can become tedious, it never became too much of a burden to persevere through.

Thankfully, the combat is not overly challenging and the interesting/inventive enemy designs ease some of the frustration from some offset difficulty spikes. Boss fights are also a highlight with bombastic and colorful set pieces that test your skill with integrated platforming challenges and entertain with a healthy dose of humor. In fact, when talking to numerous NPC’s and interacting with certain objects in the environments I had some laugh-out-loud moments.

A neat feature added from the original title is the co-op functionality, but now it’s been expanded to four-players. I was able to play with two other players (my children) and it was an intense and fun experience. The on-screen action did become too hectic at times and some puzzles required too much cooperation, but it’s a great option for those interested.

Overall, Guacamelee! 2 is a fast, furious, and fun Metroidvania, jam-packed with fluid puzzle platforming and satisfying combat that’s made all the better with the creative enemy designs and boss battles. It’s beautiful to look at, challenging but fair, and immensely fun to play. While I would say you should definitely play the first title before picking this one up as many of jokes and call-backs borrow from the first game, Guacamelee! 2 is a must-buy for fans of the original and for those looking for a lighthearted Metroidvania experience.