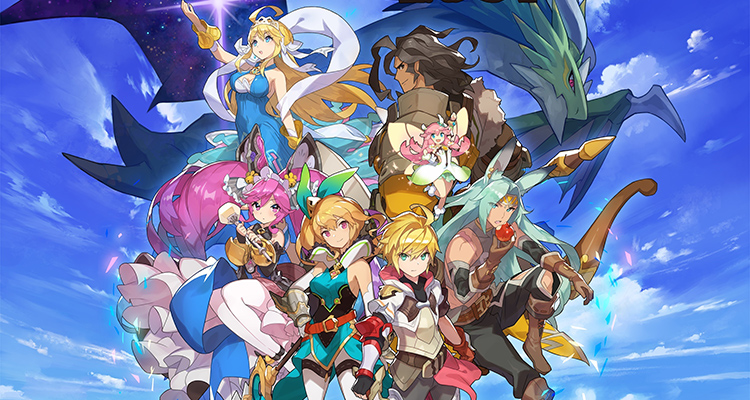 The director of Dragalia Lost has left a very important message to fans in-game today regarding the future plans for Dragalia Lost.

First off the director talks about the upcoming facility event A Wish to the Winds and the associated Winds of Hope Summon Showcase event set to begin this week. The message in full, can be seen here:

What’s Ahead for Dragalia Lost, Part 1:

This is Matsuura, director of Dragalia Lost. First, I’d like to thank everyone who is playing the game regularly.

As announced in a previous notice, today I’ll be giving you information on various in-game events, as well as some information on the game’s direction and future updates. We’re calling these entries What’s Ahead for Dragalia Lost. Please read on for more information!

The facility event will see our heroes happen upon a sister and a brother named Louise and Lowen. Meeting this pair is when the adventure begins!

Building the Wind Shrine, this event’s special facility, will increase the damage you deal to enemies within quests related to this event, so leveling it up will prove very helpful. Additionally, the Extra Quests this time around have been updated to allow for co-op play.

Aside from that, the winter log-in bonus will begin on November 17th. I hope you’ll enjoy this as well!

After this, the next raid event, Resplendent Refrain, is scheduled to start at the end of November.

From this event, we plan on removing the event-reward wyrmprints. These are the special wyrmprints that grant a damage boost against raid bosses; ultimately, they decreased the opportunities players had to make good use of their regular wyrmprints. Essentially, these limited customization options for raid events.

Our intention is for players to enjoy growing stronger during these events, and this is the end result of us considering what would simply be the most fun. Note that future facility events are scheduled to proceed as usual.

As for the details of this next raid event, perhaps you can tell from the title that songs will play a key role. We have prepared three brand-new songs specifically for this event, and the new adventurer and songstress Lucretia will be making her debut.

I hope you’re looking forward to the event and the new character!

In today’s 1.1.5 update, we have improved the AI of your team members. They will now more actively attack enemies and will use skills more frequently. This should make clearing quests a bit easier for you all.

Additionally, enemies in Avenue to Power will no longer create barriers. Please check the notices you’ve received concerning the update for details.

Now, there are four main points that make up our current direction for the future:

1) Adjustments to rupies, mana, and crystals:

We’ve noticed that many new players are becoming stuck due to a lack of upgrade resources. For that reason, we will be increasing the amount of mana, crystals, and eldwater you can get from Daily Endeavors and log-in bonuses. We’ve announced this information via the maintenance notice.

We’ve also seen that those playing the game a lot do not have enough rupies to craft all the weapons they want. To address this, we plan on increasing the amount of rupies produced by the rupie mines. We also plan to increase the amount of rupies and crystals you can get from Avenue to Fortune and Avenue to Power, and to also add a Master difficulty to these quests.

We want to make it easier to obtain the resources required for unbinding mana circles and crafting weapons. To do this, we plan to include orbs of each element, various dragon scales, as well as crafting resources in the Shop’s Treasure Trade. It will also be possible to convert these resources from low tier to high tier and back again.

We want to improve certain weapon types, specifically the bow and lance.

The idea behind the bow is sharpshooting from a distance. We’re going to reduce the time between firing a force strike and when it actually lands. We’re also looking into reducing the spread for normal arrows and increasing their range.

Regarding the lance, the idea behind it is continuous mid-range attacks. We plan to adjust the lance so that normal attacks do not launch enemies, which will allow you to keep attacking. We’ll also increase the area of the force strike so it will be more useful when you’re in a pinch.

These adjustments will not result in any visual changes, but they are directly connected to the gameplay experience. We hope these adjustments make using bows and lances more fun for everyone!

Please note that things may not turn out exactly as described here once the updates are all said and done, but whatever form the updates take, we are always striving to improve the experience.

When comparing Dragon Trials: Master and the Imperial Onslaught with Advanced Dragon Trials, there is a distinct gap in difficulty. We feel that there is not enough content to bridge that gap, so we are planning new content to fill it. We hope to make assembling teams fun by, for example, increasing the weapons you can craft. We can’t say much more about this at the moment, however.

We also plan on delivering chapter seven of the main story at the end of this year. Phares, the second heir, appears in this new chapter, and some light is shed upon a certain character’s backstory… I hope you’re all looking forward to it!

Aside from this, it looks like more and more people are clearing High Midgardsormr’s Trial, which means next up will be another high dragon trial! We’re planning to kick it off mid-December, so be sure to keep an eye out for that.

What do you think about the first part of What’s Ahead for Dragalia Lost? That’s all the info I can give you for now, so I hope you’re looking forward to these updates. It’s a lot to go over, but hopefully you have a better sense for the development team’s passion, and our dedication to this game. Thank you for playing!