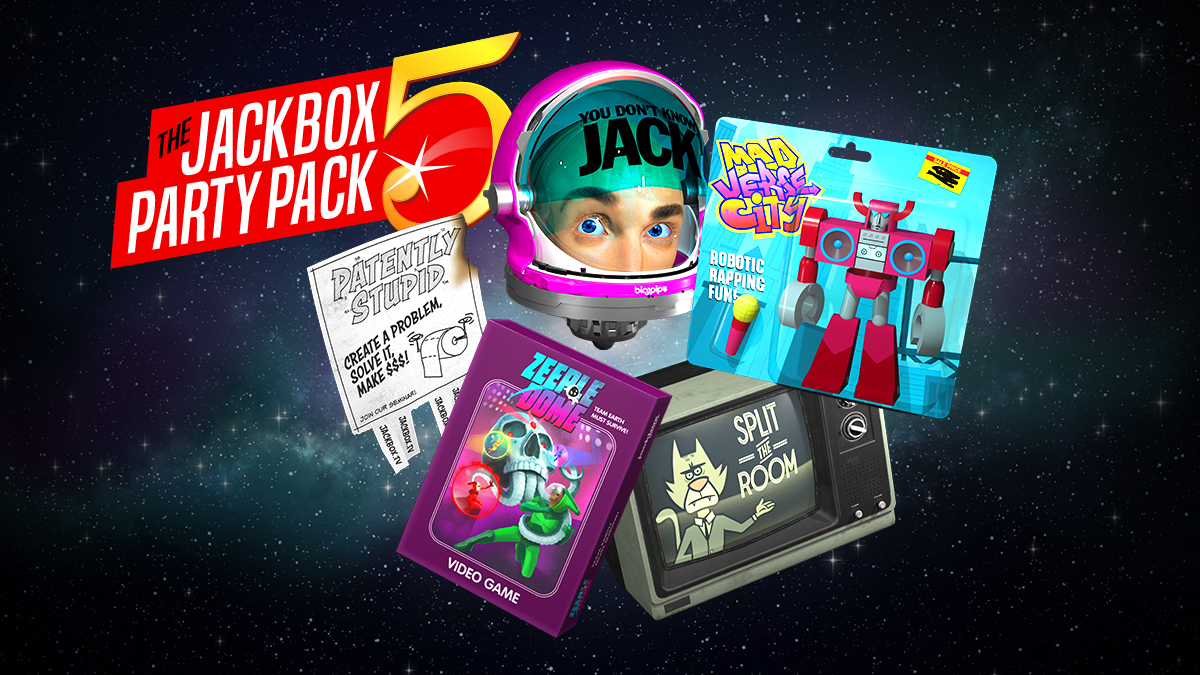 “When it’s time to party, we will always party hard!”

While some series fans have to wait many years before they get to play the sequel to a beloved game, other fans get to enjoy sequels on a yearly basis and The Jackbox Party Pack games are certainly among the latter.

As you would expect from another The Jackbox Party Pack game, The Jackbox Party Pack 5 (hereafter referred to as “Jackbox 5,”) comes packed with another five bonkers party games that can be played on mobile devices, tablets and personal computers, laptops and the like. It is also a local multiplayer game only, but just because you have all got to be in the same room to play it, people from all around the world can partake in the fun, by using a room code to join the room as a member of the audience. Essentially, it’s the same kind of gameplay fans are well used to, but how do the games stack up? Let’s find out!

Everyone’s favourite “pop-culture trivia mash-up” is back and this time, it’s getting the “Full Stream” treatment! It’s still very much the “You Don’t Know Jack” game players have fallen in love over the years, except now it looks and feels as if you were playing You Don’t Know Jack, whilst on the likes of YouTube and even Netflix.

The good news however, is the fact the whole “Binjpipe” deal does not get in the way of the sheer silliness this quiz game is known for, but there is no family friendly filter on it, so when playing with a room full of people (up to 8 are supported,) at least one of you runs the possibility of commenting something that isn’t child-friendly.

Have you ever wanted to play a game based on hypothetical questions? Questions such as “You are forbidden to ever step foot in New York City. However, you will be allowed back if you ________. Do you do it?” Split the Room is a game all about questions such as this and players are tasked with filling in the blanks to any of the questions that are supplied to them.

When all players have made their offering, the questions are then revealed to everyone and the players who didn’t fill in the blank to the current question, must then decide on whether to say “Yes” or “No.” Should players pick either opposite, the player who created the hypothetical question will have successfully “Split the room,” which in turn splits the room, and awards the player with plenty of points!

Personally, this mode is a lot of fun, but it is made even more so, when you really get imaginative with your suggestions. Although, if you’re worried someone might take this mode a bit too far, you do have the option of activating the family friendly setting.

You should never have a favourite kid, or a favourite game, but as far as Jackbox 5 is concerned, Mad Verse City is Jackbox 5 at its finest. Out of the five party games available, this is the one that brought me the most joy.

As its title implies, Mad Verse City is all about mad rhymes, except in this series of MC battles, the MCs are robots and, provided you decide not to have the family friendly mode active, there is nothing these robots can’t rap about.

Making the rhymes however, can be a little more tricky than you’d hope it be, since you only get to make the second line of the rhyme whatever you want it to be, as the first line is determined for you, but you’re not allowed to see it until after you have given it the word, or term you wish it would end with.

For those keeping score, when playing with three players, the game will actually have an AI character called Gene to act as a fourth player and the rap battles will consist of three rounds. The winner is the player who earns the most cash (money is earned by players voting on your rhymes,) but as you play, players who aren’t in the current battle, can choose to “Boo” or cheer on the robot MCs who are dropping the beat, in the fashion that beats deserve to be dropped!

It’s the “deadliest game show in the Crab Nebula!” While I am not too fond of Zeeple Dome, I can’t deny it is still a very Jackbox type game and I can admit it is the one that offers the most gameplay.

Instead of being a game all about making the player input text, or choose between available answers, players assume the roles of human, who are taking part in an intergalactic game show that could see them win millions of Zubabucks. Across varying difficulties, players of differing colours must endure a serious of rounds, fighting off an alien menace.

Any player are free to hit any alien, but there are times when colour specific characters will need to hit aliens of the same colour and as for how the hitting is done, with your chosen device, players will see their character and use them as if there were ammunition in a slingshot. Pull back, aim and fire.

By defeating aliens, players can earn points, they can also fire themselves into power-ups to change up their firing pattern. You can even shoot yourselves in a health item that will open up a ring of health-restoring energy. To recover, simply fly through it. In the event you miss, or just happen to die, provided another player can fly into your dead body, they can revive you, so you can all keep the fight going!

If you have ever harboured the desire to try your hand at coming up with slogans, patenting projects and creating solutions to real-world problems, like ways to stop the rain, patently stupid is the game for you!

Not only will you be tasked with solving the most asinine issues, but you’ll have a great time in the process.  Although Patently Stupid can drag on a tad, it will task you with drawing your problem-solving creation (a printer that prints money.) Then you need to give a name for your invention (Money Machine) and lastly, come up with a tagline (“It prints Money!”)

After that, you and your fellow players can then choose to handle your own presentation, or have it handled for you and when Show and Tell is over, you must all invest money into each other’s creations and the ones that meet a certain amount, get funded. Then there’s another round where players must attempt to create something for the same issue.

Like with Mad Verse City, when playing with 3 players, Gene the AI will be added as the fourth player, to help balance the game, which in a way, makes a mockery of the fact that Patently Stupid and Mad Verse City, supports 3 players in the first place.

Now with the games covered, with regards to performance, design and everything else, as you would expect, Jackbox 5 has no performance issues. Developers Jackbox Games know what they’re doing and have enhanced their craft over the years, resulting in them in creating of the greatest looking and handling Jackbox games known to date. But it’s the writing that gets me.

Filled with hilarious humour at every turn, you don’t just have to rely on each other to create the humour when playing, just let the hosts do it for you. You might not like all of the personalities at play, but Cookie is awesome and just you wait until you start hearing him go on about a certain Laura Dern. Keeping a straight face will not be easy. But, for the sake of stating the obvious, Jackbox 5 really is a case of madness, brilliance and a barrel of laughs all in one place.

Like all the other The Jackbox Party Pack games that have come before it, there is certainly no doubt about it, Jackbox 5 comes packed with variety! Perhaps not enough that it steals top spot as my favourite all-time Jackbox game, but the laughs are guaranteed and it’s just as good as any other Jackbox game, so if you’ve yet to pick up a Party Pack, Jackbox 5 is a great starting point. You might not like all of the modes, but the ones that you do enjoy, will have you coming back for more!