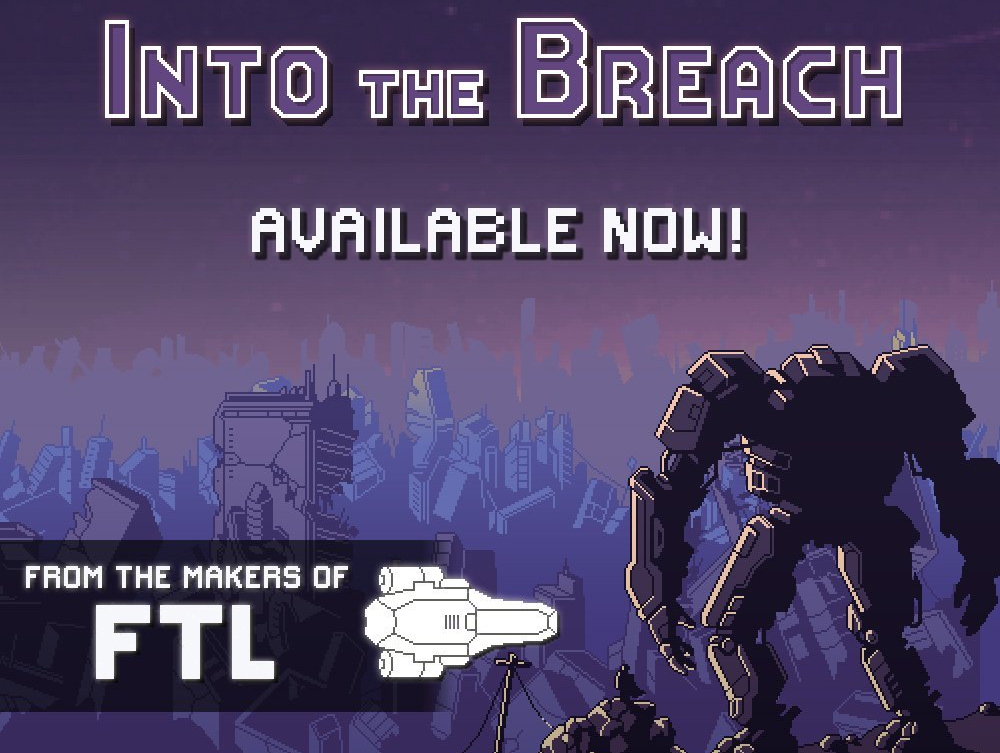 [Review] Into the Breach (Nintendo Switch)

Going Into the Breach may be our final hope….

But, developing such a hit can be a double-edged sword, especially when the public has high hopes for what the next game that developer could create next. Enter Into the Breach, the latest game from Subset Games, which harbours the strategy element, only it goes in a completely different direction. So, on that note, is Into the Breach amazing enough to live to the expectations set by FTL or it will be the game that lives on FTL’s shadow? Let’s find out!

Storywise, Into the Breach is set in a world far in the future, in which 4 main islands are under constant attack from some mysterious creatures called The Vek. The player is the one responsible for taking care of the civilization of each island by commanding 3 mechs with its pilots and abilities and doing what is necessary to protect them.

Although this premise is simple, it is enough for setting the world and the basis of Into the Breach. Now, when you choose an island or finish one area, dialogue will appear and can sometimes shed a light into the background of the world and of the island. Also, the introduction of the time travel and different timelines is an excellent and well-tied justification for the replayability of the game’s story and why the world is different in each playthrough.

Into the Breach is presented in a three-quarter view that shows the player the battlefield and the sprites of the mechs, spaces and enemies. They are made with such care that each of them stand out and are amazingly unique.

Even the enemies with similar characteristics have different and noticeable details that allow the player to easily distinguish them and their attacks and reactions to the attacks are very well done and pleasant to watch.

This attention to detail and quality also applies to the Music and sound effects. All the music available set the tone well to the action that is happening each turn, giving the player the sense of danger that motivates and help reinforce one of the main concepts of the game: that every action matters.

I really recommend using headphones while playing to give you the full immersion in the experience. The sound effects may not be as memorable as the music but also fit well, never feeling out of place or not fitting to the attack used.

The world map that you have to defend is made of 4 islands whose buildings and other structures must be protected at any cost. Each island has different environmental characteristics and each area of the island has to be protected for a few turns with additional objectives, such as collecting a pod or defending specific structures, giving additional benefits.

And is here that enters one of the many interesting aspects of the gameplay: you don’t have time to defend the whole island, so choosing the areas that will give you the rewards that you need is essential. To make that decision even more difficult, you can keep playing as long as buildings aren’t destroyed and you run out of grid power, so in some cases, you may have to decide to go in a mission to recover grid power or one that seems easier to you.

When you pick an area in the map, you enter in the turn-based combat grid of the game. In them, you have to use your 3 mechs to protect the buildings and other structures from the Vek attack, while also completing as many side missions and avoiding losing your mech pilots. Each mech can perform up to 2 actions per turn: walking and using one of the skills available, but once a mech uses a skill it can’t walk or undo his actions.

Each turn follows the same pattern: new Veks will spawn, all of them will move and prepare to attack and then, it’s your turn to use the mechs and avoid that they complete successfully their attacks after you finish your turn. The structure can be simple, but when you mix that with the many different mechs, pilots, secondary abilities, terrain designs, side missions, events and enemies available, you end up with very unique, but still balanced, areas that still have charm and are interesting even hours into the game.

After you finish your campaign, either by winning or losing, many of your progress, such as unlocked islands and pilots, are carried to the new timeline you will be playing in, which allows you to have even more freedom and to use the coins received after you complete achievements to unlock new mechs to play with. All of that ensure that Into the Breach is easily replayable, without the sense of doing the same thing over again.

Finally, the fact that each area will take you around 3 to 10 minutes to complete, makes the game an excellent fit for portability that Nintendo Switch offers. You can easily hop into the game, play one area while you are moving somewhere and stop before you even reach it. I only wish that they implement touch-screen support, especially when you consider that the UI that they use will make this playstyle very intuitive in portable play.

If you are a turn-based strategy fan or if you were waiting for the next Subset Games’ game, then I am happy to report that your expectations are met in Into the Breach. This game will offer you many and many hours of replayability that will go on without you even noticing, but it can also be an excellent game to play when you just have a few minutes. With that said, I can truly recommend it, while also waiting for a touchscreen implementation that will make the experience even better.