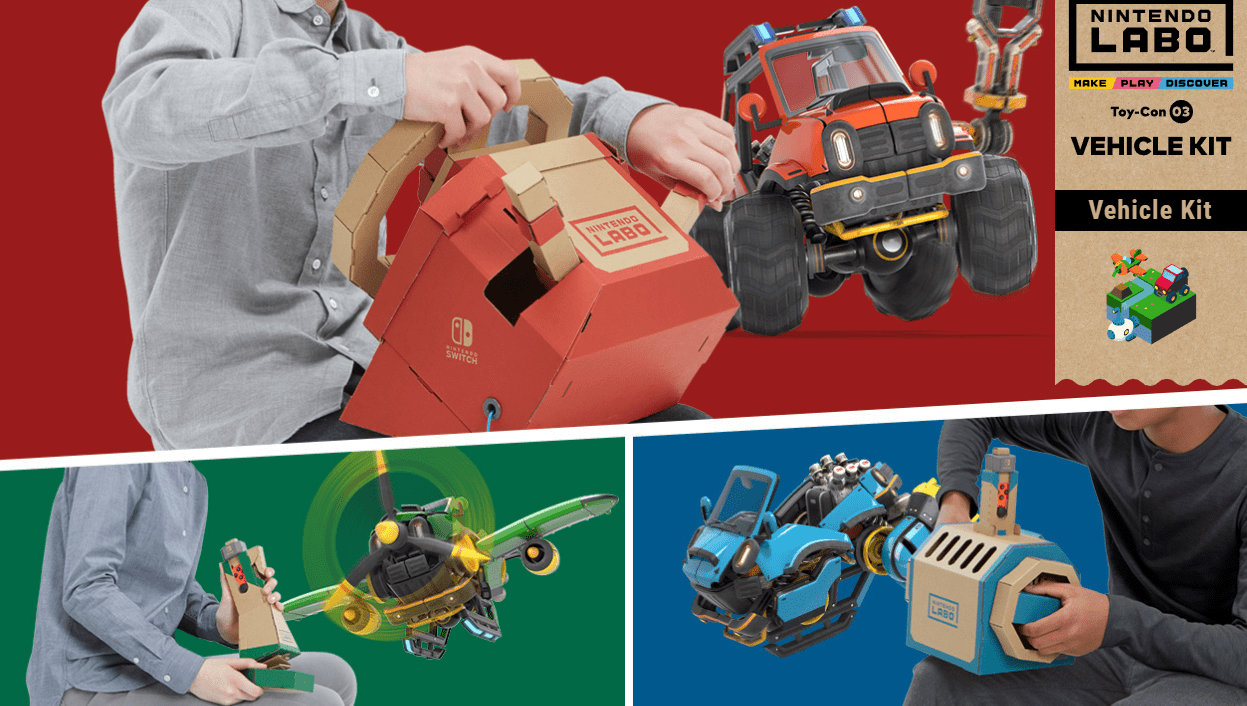 More cardboard creativity at the tips of your fingers.

While Nintendo Labo might not have been the hit it could have been when the first two kits released earlier this year, together the two kits did go on to shift more than 1 million units. So, there’s clearly a demand for cardboard creations and if you were impressed by what we got already, something even better has arrived.

Living up to its name, the Vehicle Kit is a Labo kit dedicated to vehicles. Sure, none of them actually end up looking like the vehicle they are to represent, as the Toy-Con Car is actually a steering wheel, the Toy-Con Plane is a centre stick (aka control stick,) which you can find in a plane and fly it with and the Toy-Con Submarine, it just looks like a cardboard box, with rotating wheels on its side.

Admittedly, these Toy-Con do err on the ugly side, as they’re nowhere near as attractive as the Toy-Con Piano and Toy-Con Bike, but what they can do however, is just as impressive, if not more. However, before we can go into detail regarding their ins and outs, the first step of Nintendo Labo, is to make the Toy-Con, so let’s dive into that, shall we?

If you did not pick up any of the previous kits, and are completely new to building with Labo, it is actually a pretty straightforward affair. The box comes packed with sheets of cardboard that are used for making the Toy-Con and by taking the game cart and booting it up, you will be able to access tutorials that will guide you through the process step by step.

So, instead of you having to read a long list of instructions, the tutorials will show you everything, step by step and if for any reason you get confused, you can wind back the tutorial and turn the camera angle, so as to get a better view on how certain pieces go together. Also, these tutorials aren’t solely available the first time you play the game, as you are welcome to boot them up whenever you want and watch them all over again.

Now, even though I did put together the Variety Pack a few months ago, even as an adult, throughout the whole lengthy process of building everything, I did find the experience enjoyable. I was still impressed at just how elastic bands are used to create tension and although it took me just over 6 hours, I did not consider a waste of time making everything.

What could be construed as being a waste of time, is investing a couple of hours in the Discover section of the game to read up on how everything works. This part of the Labo is not for everyone, but for me, it is the best part of Labo. I know actually playing with the Toy-Con should be anyone’s favourite part, but for me, my enjoyment comes from learning how and why everything works the way it does.

With Discover, Nintendo don’t just share tips and tricks on how to customise and decorate your Toy-Con, they reveal a lot of the inner workings and even now, I can’t get enough of it. The imagination of the human mind is in my opinion, power and that power is precisely what Nintendo are playing with thanks to Labo and once you do watch and read everything, including passing the quizzes, you will be all set to head over to the Toy-Con Garage where you can then make your own Toy-Con.

These particular features aren’t new as they are in the Variety Pack, but it is great Nintendo included them once again, as it gives the new platers to Labo the chance to learn everything, whilst having new information for returning Labo builders to sift through. A feature that is new however is Custom Controls, which is similar to Toy-Con Garage, except this time, instead of making your own Toy-Con, you can change the way in which you play Adventure Mode.

Talking of Adventure Mode, that’s precisely the next subject matter we should dive into. When it comes to actually playing with your Nintendo Labo, Adventure Mode is the huge piece of pie we have been craving for.

It might not be an overly large game as it essentially consists of an island divided up by 8 areas, with 8 missions in each one, but the island (which has something of a Wii Sports Resort/GO Vacation vibe to it,) is still enjoyable nonetheless, not to mention diverse.

Whether you wish to go for a drive through a swamp, drive a submarine whilst at the beach, or even fly over a pyramid in the morning and land in a secret garden, in the city during the night time, you absolutely can. Although, there is a limitation in place. You see, although your vehicle can change from a car to a plane, to a submarine by taking the Toy-Con Key out of the likes of the Toy-Con Plane and putting it into a Toy-Con Submarine, you won’t be able to go anywhere on an empty tank.

Therefore, in order to keep driving and exploring, players are prompted to head over to a fuel station, where they can then extend a hose from either side of their car and fill up. Not only can you get a full tank of gas, but if you’re filling up in a region you hadn’t previously been to, you will unlock and add it to your overall map. You’ll also be able to add a new trail to the game’s Rally mode. (A series of tracks for players to attempt to complete as quickly as possible, whilst controlling the required Toy-Con vehicle.)

As far as the regional missions go, a number of them are repeated across the areas, such as “Find the Flag,” and for the older generation, very simple. But, Labo isn’t really for adult gamers anyway, it’s for a younger audience who will find the slower pace of exploration, more to their liking and enjoy the challenges because they should be able to complete them with some ease.

Although some fun could be had out of them, I’m going to be upfront and admit I actually just preferred to drive around, cutting down trees with a buzz saw before taking to the skies to bomb some balloons like a fighter pilot and then rounding the whole thing off by refilling and taking to the sea for some not so deep sea diving.

Messing around like that is something I could see myself doing a good few hours of, after already doing about 6 of that already, but eventually I move on from it as I have other games to play on my Switch, but there are also other modes as well. With circuit, not only can players select the course they wish to drive on, but if you own the Variety Kit and took the time to create a course, you can actually play it here.

Still, if Circuit isn’t to your liking, you can always do Slot Cars for more racing, or play against a friend in Battle Mode, which is a bit like Robot Wars, but not as destructive. Not only does this mode allow you to select the stage you wish to fight on, adjust which power-ups appear and even decide on things like how long you will play for and how many points are required to win, but you can even do Single Player battles against a CPU if you have no one to battle against.

If you’re still not impressed though, there might be one other thing that will knock your socks off (Spoilers! It won’t,) but there is also a Paint Studio and provided you took the time to make the Toy-Con Spray Can, you can fully colour customise your vehicle, including the tires. So if it’s personalisation you’re after, you’re partially in luck.

But if after all of the above, you’re still unconvinced, that’s not necessarily a bad thing. Nintendo Labo isn’t just something you can read about and decide on the spot if you like it or not. Even seeing Labo in action is not enough. The only way to know if it’s for you or not, is to try it yourself and feel the vibrations of the HD Rumble, as the engine of your car bursts to life. To feel the sensation in your hand as you pull back on the control stick and take flight, or even just press down on the footpad (Toy-Con Pedal,) which controls the acceleration for all of the Toy-Con Vehicles.

Cardboard or not, what Nintendo have and continue to do with cardboard is impressive and I wish them all the best for the next kit they announce, but even though it is compatible Mario Kart 8 Deluxe as well, having tried and failed at using the Toy-Con Car, let’s just say that is an experience I will never need to do again. I wasn’t just bad and going round in circles, I was abysmal. But hey, that’s not necessarily down to Labo.

To some, Labo might still just be “cardboard,” but even now it is still a great concept, which has been made even better thanks to the Vehicle Kit. It really is Labo at its finest and I enjoy flying the plane way too much. Still, as fun as it is to play and put together all the Toy-Con, the latter can still be rather time-consuming affair and although playing through Adventure Mode does make it feel worth it in the end, at the end of the day, Labo’s biggest issue still remains, storage.

Whilst not all of the Toy-Con are as large in size as the Toy-Con Car, even the smallest Toy-Con such as the Toy-Con Key can take up a lot of space, if you wish to store it in a safe place where no harm can befall it. So although we’d like to say parents should plan on picking it up for their children, unless you have the space to store the Toy-Con, you would actually be better off buying them something else instead. LEGO is just as messy and hazardous to step on, but at least it’s smaller.