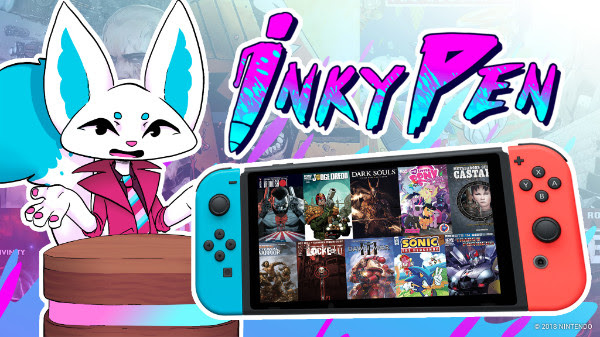 Don’t Just Game on the Go, Take your Comics too! InkyPen is coming to the Nintendo Switch this November

In Switch we game and in comics we read.

One of the benefits of being games press, is being privy to undisclosed details. You never know what piece of news is going to grace your inbox next and what we have had to sit on for the last couple of days, is nothing but extraordinary.

If you are a reader of comics and have a love for gaming, you are going to love the app that will launch on Switch this November. InkyPen is coming and it is an app for readers. (Think Kindle, but with comics instead.) Below we have the official announcement, and a video that you will urge yourself to watch:

All-you-can-read in one app: InkyPen, the comic book subscription service for Nintendo Switch:

Bergen, NORWAY – 21st August 2018 – InkyPen is a brand new subscription service for Nintendo Switch, and the first world wide media application on this console. It allows comic book and graphic novel fans to read what they want, when they want.  Simply download from the Nintendo eShop, subscribe and start reading.

A large catalogue of graphic novels and comics will be available from all over the world, including U.S. comic books, manga and European comics. You can read your favorite titles on Nintendo Switch in handheld mode or in TV mode, but also discover new ones through exploring the catalogue and content suggestions based on your interests.

The subscription-based service gives users access to the full catalogue for 7.99€ / 7.99$ a month. Titles included will come from famous publishers like IDW, Valiant, Dynamite, les Humanoïdes Associés, Titan or Andrews McMeel; more publishers will be announced soon. Some of the comic series that will be available from the beginning are: Transformers, Judge Dredd, Dungeons and Dragons, The Metabarons, Warhammer; and others based on well-known video game franchises like Dark Souls, Dishonored or Assassin’s Creed. Inkypen will also be “webcomic friendly”: its catalogue will include popular webcomic titles like Girl Genius or The Wormworld Saga.

Are you as intrigued as we are about InkyPen? The subscription may seem a tad pricey at first, but for what it offers, the comic aficionados would soon get their money’s worth out of it.