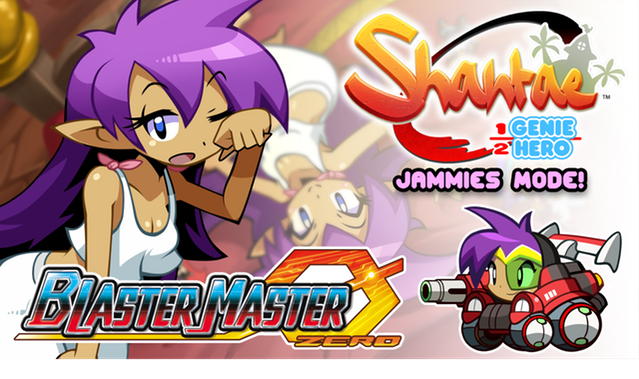 Now, this is how you say “Thank you.”

I don’t know about you, but I certainly wasn’t expecting WayForward to reveal a surprise update for Shantae: Half-Genie Hero, let along release it on the day it was revealed as well and yet, it did happen. As their WayForward’s way of saying thank you to everyone who supported the title, from its Kickstarter campaign to its physical release, the update consists of free DLC that adds a new playable mode and a new Transformation Dance.

It’s not just any new dance though, it’s a Blaster Master Zero inspired Transformation Dance that will actually transform Shantae into Sophia III and allow her to drive around as a tank, blasting her enemies. Naturally, the new transformation is not available in every mode going, but it can be used in the main campaign and it’s not something to be laughed at.

But what of the new mode that’s been added? Well, the new and free mode, is Jammies mode. After her many adventures and all the other DLC campaigns that have graced the latest instalment in the Shantae series, it is time to celebrate and what better way is there to celebrate than to have a party?

Well, there are a couple of ways, but Shantae is the mood for a party and she’s not going to let anything or anyone, get in her way of inviting everyone she could possibly think of, including the Half-Genie Hero bosses we have really come to love.

With regards to how the DLC plays, if you have checked out any of the other DLC campaigns, it’s a lot like them. The new mode isn’t an entire game, but a series of stages and boss battles that players can blitz their way through, within 90 minutes and that includes collecting all 45 Heart Squids once again.

There’s also the same locales as before, a 3 heart life system and a need to collect gems in a bid to level up and deal more damage unto your foes. Where it differs though, is in Shantae’s costume, which is none other than her pyjamas and her move set. While she refuses to whip her foes into shape, she does happen to be carrying a pretty big pillow that can be used to beat your enemies into submission, by pressing Y.

Should the pillow fighting be a bit too close to comfort though, you can always take a good step back and press A to let loose a sheep. No, that is not a typo. Shantae can now attack with Sheep only don’t take it for granted as you can only have so many sheep on the screen at once and the sheep does use up your magic, so if the magic bar is empty, the sheep will not be jumping over the fence any time soon.

But, if you’re a pacifist, although there are a number of areas in the new mode where you will have no other option but to fight, Shantae does have the means to avoid most conflicts and that is by floating away. Whether you use X or ZR, Shantae will close her eyes and lay down her head, only to have a cloud appear beneath her, which will let her float here, there and anywhere.

By no means is the cloud fallible, as Shantae will wake up naturally or forced if you attack or jump with A, but in the event it pops, provided there’s enough space between you and certain death, you can make her to go back to sleep once again, and float away once again.

Being DLC (free DLC at that,) there isn’t all that much more to the new mode than what is covered above already, but by no means does that mean it is not enjoyable, as it is very much so. The typical Shantae humour is well and truly present, as is the difficulty level new-comers to the Shantae series like to talk about and the Bonus Clear images that players can earn beating the new mode and meeting the usual conditions. (Beating the mode with all collectibles and etc.)

Long story short though, if you love Shantae: Half-Genie Hero, you love playing through all of its bonus content and was waiting on another reason to play it again,  the new Shantae Summer Surprise update is that reason.

The DLC may be more of the same, but even though you can have too much of a good thing, when it comes to Shantae: Half-Genie Hero, the charm is still here and in no way of getting old. If this is the last hurrah then what a way to close the door on the fourth Shantae game, then to give it one last adventure and thanking everything in the process!