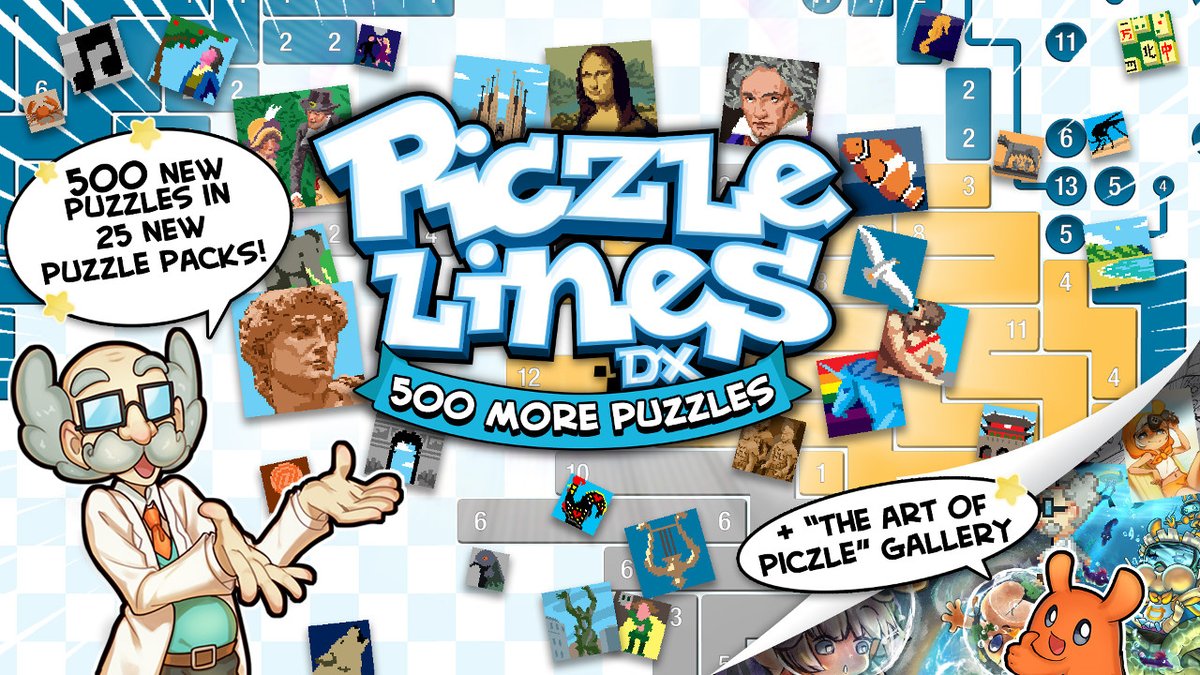 “Just when I thought I was out…they pull me back in.”

Last August, after previously releasing games on mobile devices, together with Rainy Frog Games, Score Studios brought Piczle Lines DX to the Nintendo Switch. On the surface, it seemed like a simple puzzle picture game where you must connect numbers and draw lines as you complete an illustration.

In reality, it was a thoroughly enjoyable and heavily content packed title that had tons of fun puzzles to complete, with many more added to the game since launch. It’s one of the few games that I have spent the most time playing on my Switch, as I have now invested 130+ hours into it. (You have my full permission to gasp in disbelieve, I would.)

How I have played the game for so long is a mystery even to me, but one way to think about that excessive playtime is as a testament to just how good Piczle Lines DX is on the Nintendo Switch. Only, clearly I am not the only one who has high praise for the game as it often gets a lot of love expressed on Twitter and the developers behind it, simply love it too much to let it die, as even more puzzles are coming and not in the way players would expect.

Instead of launching as DLC that could have been added to Piczle Lines DX for free, or even requiring a purchase, 500 new puzzles have been created and in what I feel is a brilliant move by Score Studios, is being released as a new game. (A new game which will only set you back $9.99 and has a 15% discount available to those who own Piczle Lines DX.)

With 20 puzzles per pack and 25 packs in total, players can expect to complete illustrations with themes of Big Bellies, Hobbies, Creepy Crawlies, Legendary Heroes, Mythical Bosses, 8 different countries, Boffins and my personal favourite, One Colour Puzzles. Just in case you felt the previous game wasn’t hard enough, this particular pack will test puzzle-solving skills and your patience.

Then there is new music and the most important of all, an “The Art of Piczle” feature. By no means is it a playable mode, but it is a gallery dedicated to numerous images that reveal “how some parts of the game came to be,” some of the design sketches for various characters such as Score-chan, and even puzzle pack icons for both  Piczle Lines DX games.

As a gamer who has spent as much time as I have, playing the previous game, I did find this bonus feature to be positively brilliant and just a fantastic touch by Score Studios. (Especially when there are 36 pages dedicated to this feature!) Sure a Story Mode and Achievements aren’t present this time around, but then Piczle Lines DX 500 More Puzzles! is not a sequel. It is an extension of the Piczle Lines DX universe that has plenty more picture puzzles to be filled in, at a price cheaper than the original game. It also makes for a great standalone game and does not require players owning Piczle Lines DX, to play it.

Now, the lines you draw can go in any direction, but they can never cross over. As for how to cross them, you can do so by holding the ZL or ZL buttons and moving the analog stick to where you want the line to go. You can also use your finger and drag it along the screen thanks to supported touch-screen controls. For the much larger puzzles, like the ones that are 128×128, you will be limited to how much of the screen you see, but you can outward pinch the screen or hold X to zoom out, with pinching inward and the Y button to zoom in. You can also swipe the screen, of use the left analog stick and hold the L or R buttons to quickly scroll across.

And that, as they say, is that. The controls are that simple and easy to remember and will only take a minute or two at the most to master them. Once mastered though, there is nothing stopping you from stepping forth and playing any of the game’s 500 puzzles and playing them in any order you wish. Always be sure to have half an hour to an hour of time to spare though as although you can pick up and play Picture Lines DX 500 More Puzzles! anytime and anywhere, 5 minutes is never enough time to play it as one puzzle is never enough and Picture Lines DX 500 More Puzzles! is just as addictive as Picture Lines DX is and equally as good!

As long as you have played Piczle Lines DX and enjoyed it, you will love Piczle Lines DX 500 More Puzzles!. Plus with the gameplay being the same, you won’t even have to learn any new mechanics. Instead, you can just jump right in and fully embrace the fun that awaits you. If however Piczle Lines DX 500 More Puzzles! is not enough of new game for you, there is a Piczle Colors on its way to the Switch, but it won’t be out until Winter 2018, so, you will have to wait a long time for a new Piczle experience.