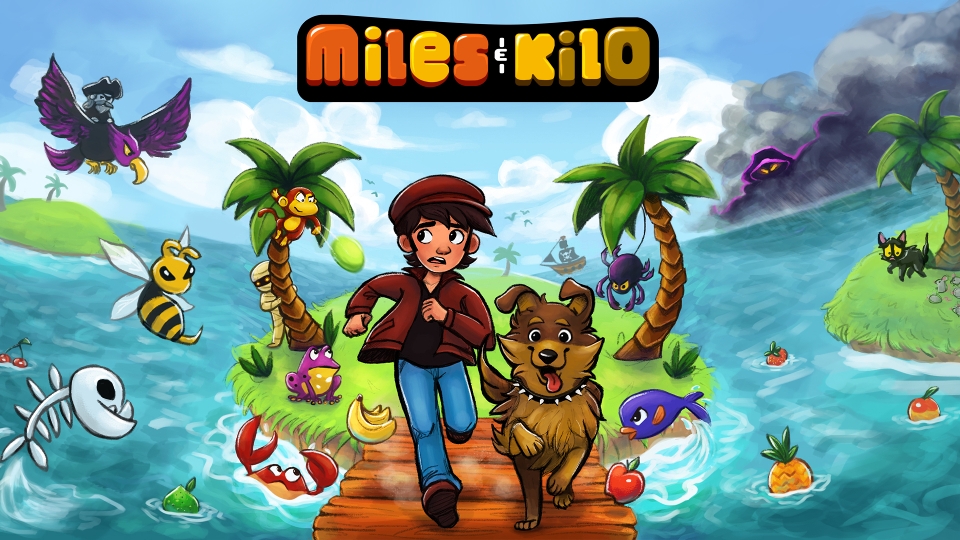 Miles & Kilo is an arcade adventure game that stars Miles, a young man, and his dog Kilo. It’s a charming game with challenging platform action and controls, both for Miles and Kilo.

When I first saw this game, I was intrigued. It looked hard and yet easy at the same time. I wanted to give it a go.

Miles & Kilo is heavy on the platforming action. There are levels for both Miles and Kilo. When you are Miles, the human, you run through the stage from left to right. Encountering enemies, you defend yourself by jumping on their heads or hurling a piece of fruit at them. You can only hold onto five pieces of fruit at once, but there are plenty of fruit around the level to collect to keep up your ammo.

When you’re Kilo, you start off as Miles who grabs Kilo’s leash and then Kilo drags Miles around. His controls are similar except he can roll bouncing on enemies, not having to throw fruit at them. Kilo also runs automatically which makes it so you can focus on the precise jumping. Though sometimes it can be pretty fast paced.

The controls are fairly simple, despite how precise you sometimes have to be. The main buttons are jumping with B and using the Y button to either chuck fruit, punch obstacles, or roll when you’re Kilo.

It’s quick to learn and easy to get addicted. There’s about 7 levels on each island, the seventh level being a boss which is played similarly to the other regular levels. Each level times how fast you do it and counts how many times you die with no consequences – if you die, you just start back at the beginning of the level and try again.

The graphics are awesome, giving that pixel-y arcade look, but still maintaining a smooth and crisp picture for when you are playing. The backgrounds and characters are bright and clearly distinguished from one another (except for the challenging levels that cast the forefront of the game in shadows).

It’s great that they used the graphics to go against us sometimes. Overall, it’s very easy on the eyes and the style draws you right in.

The music was also upbeat, something that we enjoyed bobbing our heads to as we went through the levels. There were some jumps that we missed several times and the music never missed a beat when we were put back at the beginning of the level.

The sound effects were satisfying. Especially throwing the fruit and getting coins as you run by. Throwing the fruit was the funniest to me though because often times I’d accidentally throw it (well, multiple at a time) right at the beginning of a level. It was always a great start to the level.

Miles and Kilo are flying in their airship when Ripple stops them and makes them crash. Ripple and a few of his friends each grab a piece of their plane and scatter about the islands. Now Miles and Kilo need to get them back so they can escape.

Ripple seems to resemble a dark demon or Grim Reaper sort of creature. His friends remind me of Halloween monsters, such as a mummy and a black cat. Each friend is the “boss” of the island, the last level that you defeat before moving onto the next island.

Miles & Kilo has decent replay value. Aside from being charming with witty dialogue and fun gameplay, you can definitely retry the levels to beat your high scores and time. The levels are quick enough to be picked up and replayed, even if you were just planning on killing a little time.

Miles & Kilo is a fun and challenging platformer. It’s quick to get through one level and then you may die a lot in the next level. Even though it’s a 1-player game, it’s easy to sit and play alone or pass the controller along to a friend and alternate the levels. This is one we’ll revisit for sure.