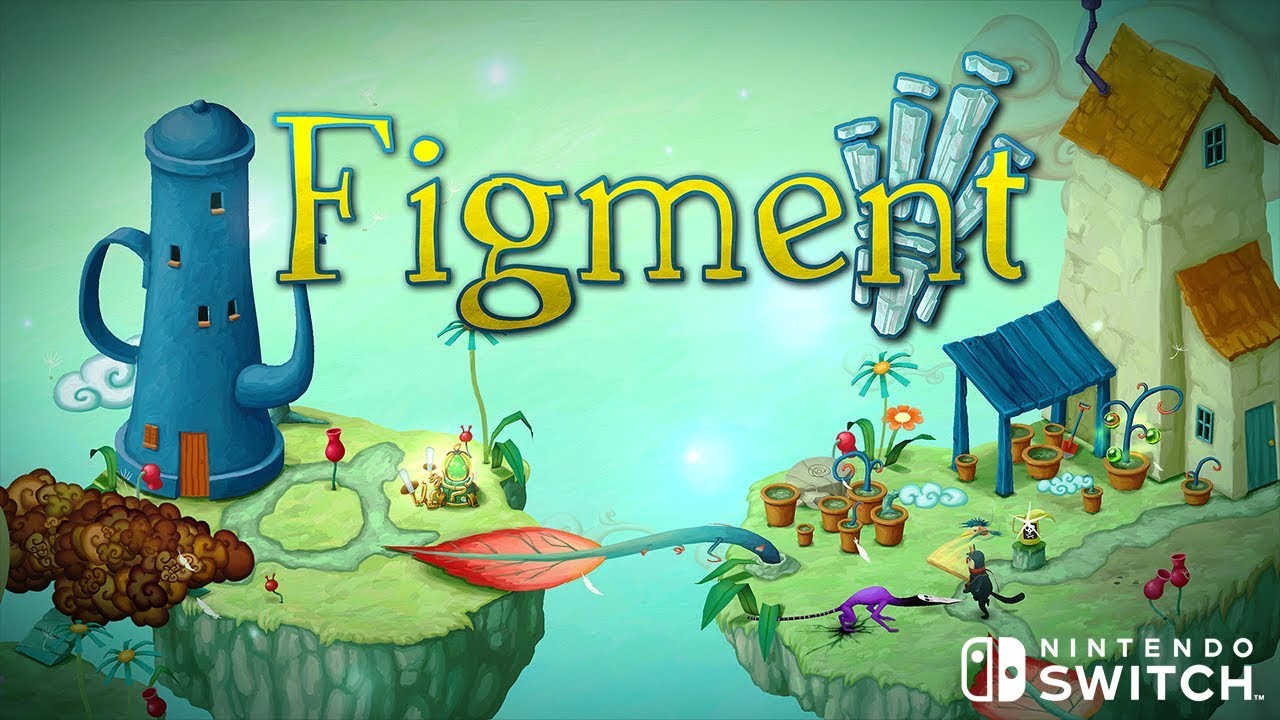 Figment begins with a family car trip, where a mother and father are speaking to their child about future career plans. As this audio-only story unfolds over the credits, we hear the obvious sounds of a horrific car crash. The screen fades to black, and when it fades back in, we find ourselves in a storybook world of floating islands, catchy music, and an apathetic has-been (Dusty) being coaxed into action by his old companion, the much too cheerful Piper.

In one of the latest adventure games for the Nintendo Switch, we take on the role of Dusty, the former imaginary friend/hero of the mind. Piper informs him that nightmares are on the loose, and Dusty is the perfect man for the job. Disinterested until the nightmare steals Dusty’s drink, the reluctant Dusty ventures once again into the mind to clean house and set things right again.

We are told that Dusty hasn’t been called upon in a long time, and as such is in a weakened state. This seems like it will be a huge factor in the game, because Piper tells us that collecting endorphins will strengthen us until we are our old selves again, but even at the end of the game, it doesn’t seem to have made any difference at all. That’s okay, because Figment is an adventure game with a much stronger emphasis on solving environmental puzzles than combat, and so the fact that you may or may not be slightly more powerful by the time you reach a boss than you are at the beginning of a stage is inconsequential.

Figment’s main gameplay, as I stated, is solving environmental puzzles. You have to chase the nightmares through different sections of the mind, each of which have their own obstacles to overcome and machines to manipulate to do so. You will spend a good portion of the game running back and forth across different platforms swapping out batteries, handles, and metal discs that serve as elevator platforms, and manipulating switches and cranks to power machine on/off, or face them in the appropriate direction. At one point you will even use the train of thought to crash through spider webs blocking your progress.

On occasion, a level specific set of creatures will pop up, and each of them have their own strategy for easily defeating them. Once you’ve figured that out, you will have no problem defeating them. The same goes for the first couple of bosses that you will encounter. Your main moves are rolling (in place of jumping), swinging your sword, or holding your attack button to do a charged attack. Combat is basic, intuitive, and a bit tedious. Again, though, the devs recognize this and make what could have been an occasional, but boring encounter, into one of the most endearing parts of the game. Figment’s bosses each have their own song, and they sing these rhyming verses as they assault you. It plays in very well with the storybook like dreamscape we are traversing, and you will at least chuckle a little at the bosses while they sing of their greatness or your inevitable defeat.

Figment does a great job with so little at touching on some of the darker feelings that we all have from time to time. Dusty is the embodiment of apathy, and even though he continues to press on, you can tell that most of what Dusty has, and is, going through is a result of being overwhelmed by the feeling of helplessness that stems from trauma and brokenness. The revelation of what Dusty was unfolds as we make our way through the mind, and it leads up to a satisfying end.

Overall, Figment is a beautiful and melodic game that expresses its own quirks in a lovable, and creative way. The core gameplay is nothing new, and gets a little repetitive at times. However, it is not enough to detract from the journey, and the short runtime means that it doesn’t overstay its welcome at all. For those that enjoy solving puzzles to a catchy soundtrack and miss the magic that childhood storybooks created in your own brain, Figment is a must. If you’re looking for action with a side of adventure, this isn’t the place to find it.