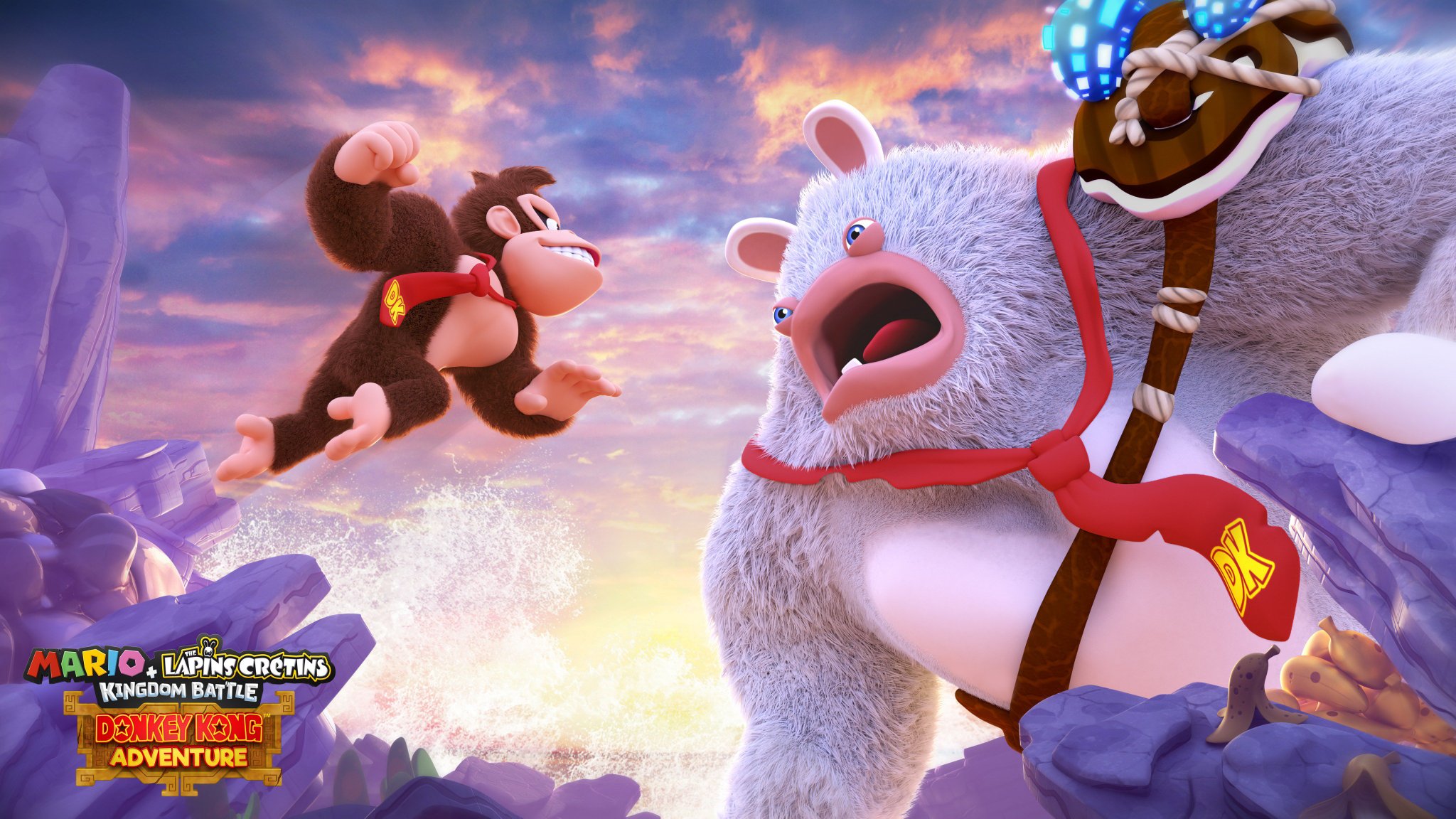 “So they’re finally here, performing for you. If you know the words, you can join in too, Put your hands together, if you want to clap, as we take you through this monkey rap!”

Let’s be honest, if you’re reading this review, it means 2 things, with the first being you’re a huge fan of the ambitious Switch exclusive, Mario + Rabbids Kingdom Battle, which released August 2017. As for the second, you have either yet to purchase the Season Pass, or have just yet to play and you want to know if Donkey Kong Adventure is any good. Well, because we have no desire to delay answering that, let me put it this way: “Even if you have never played a Donkey Kong game, or thought much of the character, this is the BEST Donkey Kong adventure (pun intended,) you could lose your DK virginity to. And if you are a DK fan, then you especially need this DLC because you will love every second of it, I kid you not.” And you know what else? While that might seem like high praise, I actually feel like I’m underselling it, as it really is that good!

So, because I am madly in love with it, due to being so impressed by how far the developers took it, I hereby dedicate this review to compel you to play the DLC as soon as you’re able to and now that my agenda has been revealed, let’s make a start. Although we don’t usually do a Q&A in our reviews, I want to address a couple of questions players have. With regards to what is Donkey Kong Adventure? It is the story mode DLC we first learned about last year for Mario + Rabbids Kingdom Battle, which is included through the Season Pass, can be purchased separately, or with the Gold Edition release of Mario + Rabbids.

With Donkey Kong being a might powerful ape, he’s got no time for sliding tackles. What he does have time for however, is grabbing and throwing. Whether friend, foe or even part of the terrain, in the form of something you can take cover behind, DK has no qualms with throwing it as far as he can. The only difference between throwing allies though, is it doesn’t hurt them and it will allow them to advance even further across the stage, in a single turn. Being a unique means of fighting not available in the main game, you’d be surprised at just how much of a game changer it is, as it opens up a new way to strategize and take down fantastical enemies.

Donkey Kong has some pretty skills as well, such as one that allows him to crack out his bongos and lay down a beat that is so hot, enemies within range can’t help but do a little dance toward him, just so he can go Bananas and pound that ground, causing damage to all those around him. Should enemies be distanced from him though, Donkey Kong carries a big banana that he can throw like a boomerang. Not only can his Bwananarang strike one enemy, but it can hit multiple targets and just in case his talents weren’t enough of a difference, Rabbid Cranky is pretty awesome too.

Not only does that old coot have some truly fantastic animated interactions with Donkey Kong, but in battle, with a cane in one hand for taking swings at Beep-0 and a crossbow that can deal an insane amount of damage to multiple enemies, he is not a character to cross. What makes him even deadlier, is the fact that as long as enemies are close enough, with one of his skills, he can tell a tale that makes them go to sleep.

But the biggest question of them all to answer, is not how long will it take to complete/how much content it has? But, where exactly does this story take place compared to the story present in the main game. The answer to this, is actually a simple one. Donkey Kong Adventure is neither a prequel and nor is it a sequel. It is however, a series of events that takes place between the first and second worlds. Talking of the first world, beating Ancient Gardens is a prerequisite, so if you’ve only picked up the game today, you’ve got a bit of work to do.

With that cleared up, content-wise, Donkey Kong Adventure does have enough levels and areas that it will take you at least 6-7 hours to beat them all, which includes 2 battles against Mid-Bosses and 2 against the big bad Rabbid Kong, but if you’re looking to get everything and experience everything, you’re looking at a 10-20 hour-long stint. Immediately, some of you may feel that’s a bit short, but let’s be fair, there are a number of games out on Switch already that take less time to 100% and they don’t look anywhere near as gorgeous as Donkey Kong Adventure does. So, even though it is DLC and not as big as some people wished it would be, as fantastic as it would be if Donkey Kong Adventure was a full game, even in its current state, the DLC is more than big enough to warrant a digital stand-alone release.

But, even after all that, if you’re wondering why I have nothing but praise for this adventure, it’s because it radiates love on every level. The developers didn’t just heavily borrow elements from the main game and slap in Donkey Kong just because they could. They took their time with this and create an island environment where Donkey Kong would be a natural fit.

They made sure the island referenced the Donkey Kong series whenever possible, be it secret areas that look like something straight out of a Donkey Kong game. There are 20 puzzle pieces for DK to get his hands and they made sure DK, was the DK we know and love. Sure, it’s Ubisoft’s spin on him, but Donkey Kong Adventure is just as well written, if not better than Mario + Rabbids Kingdom Battle and the chemistry of the characters are insanely good. DK is DK, Cranky is, well, Cranky, and Rabbid Peach does what she does best, more of the same self-obsessed behaviour we love her for.

There are just so many animated moments in this game that will make you laugh, cry and have to do a double-take because your eyes won’t simply believe it the first time you saw it. I swear to God, your left thumb will be hovering over the Screen Capture button because there are just so many great moments, you will have no choice but to take a picture, or even save a video of the last seconds. But, being the kind of developers that they are, Ubisoft Milan didn’t just make sure Donkey Kong Adventure looks and feels like a genuine Donkey Kong game, but they even had the talented Grant Kirkhope, make sure it sounds like one too.

Having already composed Mario + Rabbids Kingdom Battle and soundtracks for previously released Donkey Kong games, there really is no better man for the job than Kirkhope and what he has done for the DLC, is masterful. It’s not a complete replica of DK tunage, as some elements of Rabbids and the main game have influenced it a little bit, but the balance is absolutely spot on that you only need to hear a few seconds of each newly composed song, to realise you’re listening to something that honours not only the game itself, but every IP present in it.

Just in case I failed to properly convey what can be done in Donkey Kong Adventure, the general gameplay and mechanics, are a lot like the ones we see in Mario + Rabbids Kingdom Battle. There is a hub world, referred to as an Atoll, where things like the Museum can be accessed to view the soundtracks, 3D models and artworks that you’ve collected. All of which are items that can be encountered in the various areas of the game, always in chests in obscure places, or hidden behind clever puzzles waiting to be solved.

There is a Battle HQ where new weapons can be purchased with Donkey Kong Adventure’s Banana currency, team info can be viewed and Runes can be spent, upgrading the Skill three of all 3 playable characters. There is also a Washing Machine that can be used to return to levels players have previously beaten, in an attempt to replay it and complete it in the set amount of turns, with all characters alive, to get a perfect score on it.

In addition to Donkey Kong Adventure’s 23 main levels, there is post-game content in the form of 12 mind-boggling and difficult challenges. They might not be for everyone, but for some players, they will be just too irresistible to pass up on. But I can absolutely state that you will love exploring the full world of Donkey Kong Adventure, as the world is as lively as the main game, thanks to those pesky Rabbids getting up to no-good, everywhere you go.

So yes, Donkey Kong Adventure offers more of the same, it’s just presented in such a fun way that it does deserve to be considered its own game, I’m just saddened by the fact there’s not more too it, because after playing this, I need more Donkey Kong + Rabbids in my life. Until such a thing happens though, I guess I’ll just have to settle for creating a new save file and playing through the whole thing again.

Having not played a demo of Donkey Kong Adventure like some games press did, I am truly grateful to have been able to play the entire thing a day early, thanks to the DLC releasing earlier for those who own the Season Pass. It dropped on a day I had nothing to do for once and although I harboured no desire to beat it as fast as I possibly could, the second I started playing, I was instantly hooked. The beat was too infectious, the world is too gorgeous and DK is too much of a hunk to walk away from. Thank you Davide Soliani and the entire development team who worked so hard on this. It is without a doubt a fantastic follow-up to what was already a great game and just makes the whole package an unmissable experience.