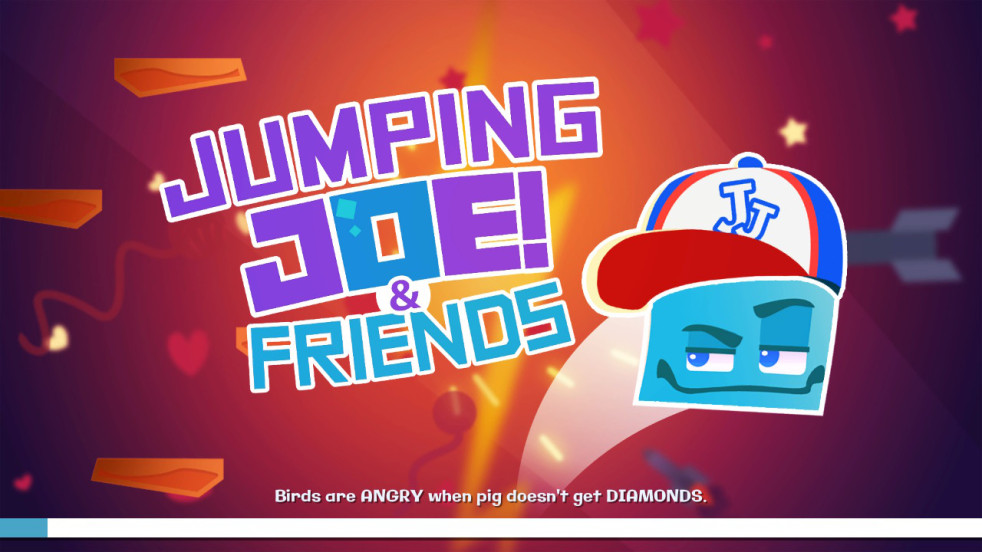 Ascend to new heights with this Switch port of a mobile free-to-play game.

For those of who have never heard of Jumping Joe & Friends, it is a multiplayer, couch co-op game that started out as a mobile game and has recently found itself ported to the Switch. As the Switch library continues to grow, it was inevitable that it would be filled also with bargain-bin, mobile games. But, in its defense, Jumping Joe & Friends adds a few features to its Switch port that makes it a hair above the other mobile game ports we have seen so far.

The extra that this port to Switch brings is found in its couch co-op which allows for up to 4-players duke it out as you ascend higher and higher through the levels. The gameplay is the same but this time around it’s a first to five stars, winner take all mode. Because of the randomness, the playing field is leveled early on and sometimes winning just means being lucky. It’s not all about speed here, though you do need to avoid the ensuing flames underneath of you. The matches are shorts burst of fun and help to alleviate the otherwise bland grind of the single-player portions of the game.

It has a pretty great story too if you love simple stories. All you need to know is, you jump left and you jump right and along the way, you will need to avoid birds, bats, cannonballs, spike platforms, saw blades, and more, as far as story there isn’t much aside from getting higher, collect coins, and power-ups.

With regards to content, in Jumping Joe & Friends, there are characters to unlock, which for the most part look different and can acquire different special moves to be used to help you reach higher heights. Along the way, you will play through and grind for a higher score and more coins which just unlocks more pointless costumes and become more of a chore along the way. Through your jumping left and right, and left and right again, you will encounter a shifting camera, saw blades, spiked platforms, bats and more along the way. But every time you die you there is a rinse and repeat mentality and you end up doing more of the same very quickly.

One redeeming area of the game is the multiplayer couch co-op where up to 4 friends can bounce and jump to the highest of heights. The gameplay can be short-lived but it can also result in some fun matches with a group of friends, and maybe a few drinks.

Musically, the tunes in Jumping Joe & Friends is catchy, but it’s nothing to write home about. Sure the music fits with the game and the actions of jumping, but that’s about it. As for audio, there are sounds and they fit with the platforming back and forth. The special moves consist of explosions, rocket sounds, and more which have effects that fit perfectly with them, but it’s nothing outstanding either.

Jumping Joe & Friends is repetitive, and it gets boring very quickly. It has, however, kept the attention of my 10 and 8-year-old daughters which sometimes is all you need. There are better games out there for young kids, and as far as time wasters go, other games that actually are more feature-filled than this one hit wonder of a game. I tried to search Jumping Joe & Friends to find more than the basic jumping mechanic and platforming, but there really isn’t much there except the jump left, jump right and repeat movement through the level.