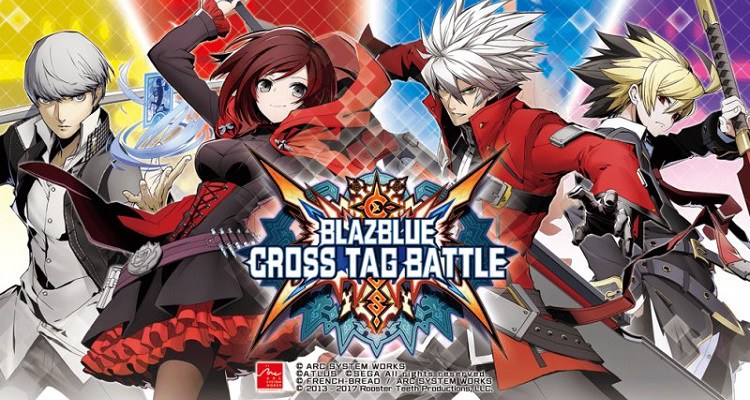 Can’t escape from crossing fate…or can you?

Spoiler alert: You can’t escape from crossing fate. Believe me, I’ve tried. During my attempt to escape from this fate, I was bamboozled and thrown into a tag team tournament at my will. More on that later. From the minds behind Dragon Ball FighterZ comes BlazBlue: Cross Tag Battle, a unique take on the fighting genre that combines multiple universes into one collective extravaganza. Thus resulting in In BlazBlue: Cross Tag Battle having many different universes that collaborate into one huge fighting experience, that lets you choose characters from series’ such as Persona 4, Under Night In-Birth, RWBY, and BlazBlue.

You start the story mode with one of these characters, each from their own respective universe: Ragna The Bloodedge, Hyde, Ruby, and Yu Narukami. Each of these characters plays completely different, with no two characters being the same. Each independent universe has their own backstory on how the characters have arrived into the world of BBTAG, which you can find out in the five story-arcs of the game. These being the prologue along with a story for each universe. The stories all have similar backstories, with the main conflict surrounding the characters themselves. While the characters were living their everyday life, they were randomly ejected from their universe and placed into an unknown world. With no knowledge of the world around them, they seek answers from an unknown voice that speaks to them right from the beginning.

Characters will cross paths with characters from either their universe or from the other ones. This ominous voice will guide the protagonists throughout the whole storyline, even up until the end. Completing episodes will earn the player points, which can be used to buy alternate color combinations for characters, icons, banners, and much more. These are all for cosmetic purposes, where nothing bought will give players advantages over other players. The in-game currency can also be earned by competing in online battles and talking to some of the NPC’s around the lobby.

Fate has called upon characters from these universes for one reason: to compete in a large-scale tag battle tournament. Their mission? To protect one of four keystones given to them when they are first brought into the unknown world. The story mode pits each protagonist character with the task of protecting one of four keystones, protecting the designated color (which matches up with the respective universes) will transport the winning players back to their universe. Besides just protecting the keystone that you begin with, the narrator will often push the character to try to take the other characters keystone. The only way for the world to return back to normal is for the keystones to be kept safe, but without spoiling too much of the story content, events begin to unfold near the middle that really makes things intense.

There are multiple endings that will play out depending on the choices you make and the order in which you play. The player will face characters from each universe throughout the questline, with each questline featuring more dialogue scenes than combat. This helps to stretch out the story, but I can’t help but feel like there could have been more battles throughout the story mode. The story mode is broken up into episodes, with each story-mode lasting around ten episodes. Each episode normally has one battle, but sometimes character interactions (and choice) will lead other battles to brew. Each character is voiced, however, which makes it much more bearable to sit and listen to.

Multiple characters may appear throughout these dialogue “cut-scenes”, making them drag on too long at times. Thankfully there is the option to speed up and skip over dialogue portions entirely if you are just in it for the fighting. That’s the beauty of BlazBlue: Cross Tag Battle, as players have the option to just cruise through the story and go straight to the fighting, or they have the option to listen to each and every line of dialogue. It’s best to listen to the story play out because interactions with other characters are surprisingly interesting. Besides just the speech, characters will also express emotion through exclamation marks, worried teardrops, and much more. This adds another layer of realism to the game and makes it feel just as if you were watching an anime.

What makes this game different from any other fighting game on the market? Its accessibility. I was able to pick up and play the game right from the start without having to change the difficulty or rework the controls. No nonsense, just straight up gameplay. More experienced players will find it easy to learn many of the game skills, but I found it easy to learn some of the quicker move combinations and utilize them to my advantage. Players can use aerial attacks, blocks, running attacks, ultra combos, and many more techniques to aid them on the battlefield.

Arc Systems Works, has included the option to change the button layout, but I found the game so accessible from the start that I did not see the need to change it from the get-go. Over time you will find it to your advantage to change up the button layout to make performing moves easier, but the default settings worked very well for jumping straight into the game. Combination manoeuvres can be both easy and difficult to pull off depending on your skill level. Tagging a partner in and bringing them to fight alongside you can prove to be deadly to your opponent, whether that being a CPU or an online challenger. Learning how to utilize everything that the game has to offer is both time-consuming and beneficial to the player, as learning how to hit efficient combos can end matches in a matter of seconds.

Continuously losing to veteran players online and in ranked battles? Don’t fret, as there is a fully equipped tutorial available right from the start. This teaches you how to hit different moves, combos, and how to get the most out of your attacks. The combat system might seem hefty at first, but taking the time to walk through the tutorial/training mode. It allows you to set your own parameters and enemy actions to allow you to learn what you need. You can choose from one of the 18 available characters, with another two available on the eShop as a free download. Like I had stated previously, each character plays completely different with none of them being carbon-copies of one another.

It is up to your playstyle to pick and choose which two characters suit you best. There are swordsmen, heavy fighters, light fighters, quick fighters, Persona-based fighters, and so much more. The diversity is there, and the roster has a perfect balance of characters to choose from. Besides the episode and training mode, there is also a versus mode where players can split screen with their friends using the stage, music, and characters of their choosing. This mode works just as well as you would think, and it suits the Switch very well. Playing with friends in tabletop mode is fun and unique, and brings even more value to the game.

On to the other modes included in BlazBlue: Cross Tag Battle. Tactics Mode is a mode where players play systems unique to the game while completing missions. This is the one that will slip under the radar to most, as it brings the least amount of enjoyment and seemed like an unnecessary (but welcome nonetheless) addition to the game. Lastly, the game includes a horde mode known as Survival, where players face off against a multitude of foes with a limited amount of health. Strategy and efficiency are key throughout this mode and surviving as long as possible require players to utilize their entire move-set.

Along with the above modes featuring throughout the offline portion of the game, the game also offers players a gallery mode and a replay theater. These modes allow players to view cut-scene shots, episode CGs, movies, illustrations and saved matches. Some of the shots featured throughout the episode mode are absolutely stunning, so these modes help to keep those safe in a different portion of the game.

The game runs wonderfully on the Switch in both docked and handheld mode, and I ran into no graphical errors or game-breaking bugs. Online mode ran very smoothly, and the simplicity of loading into lobbies made it easy to jump into games with friends. What you see is what you get with BBTAG. Everything works, and the gameplay is flat out fun. There is a great diversity of characters to choose from, and each one provides a unique experience to be had. The episode mode is a great way of learning the backstory to how all the characters crossed together in the first place, and it was a fun little way of learning the ropes of the game. Training Mode helps unskilled players learn the basics and even how to perform masterful combinations. BlazBlue: Cross Tag Battle may appear to be a twin to Dragon Ball FighterZ, but there is so much more once you dig into what the game has to offer. The game is definitely worth the asking price of $49.99 and it belongs in everyone’s Nintendo Switch library. Those that enjoy what the game currently offers can look forward to a plethora of additional DLC coming out in the near future as well. Fans of fighting games alike will definitely find themselves at home with this game, and it checks off as one of the best third-party titles on the platform.