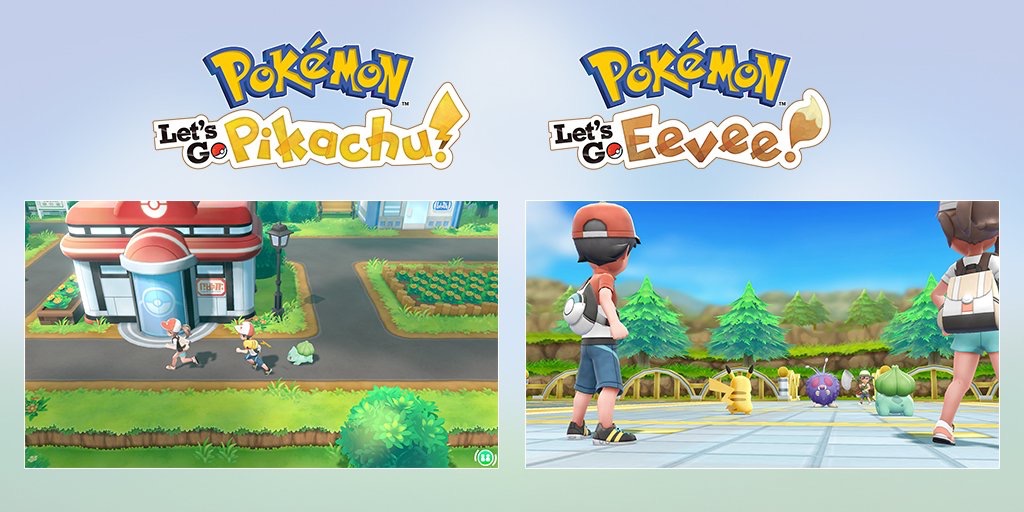 The Pokémon of Pokémon: Let’s Go:

Mr. Masuda: In general, it’s the original 151, but as we just showed with Alolan Exeggutor, some of the Alolan variants will also appear.

Getting Rid of Wild Pokémon Battles:

Question: With Pokémon appearing on the field and the catching gameplay being more similar to Pokémon GO, does that mean there are not any wild Pokémon battles?

Mr. Masuda: With these games, we’re really focused on clicking the Joy-Con to throw the Poké Balls to catch Pokémon. We decided to get rid of the wild Pokémon battles to catch them, but we still have Trainer battles with a variety of difficulty where you use your Pokémon in battle.

Question: When you were choosing the Pokémon for the two titles, why did you choose Eevee as the other Pokémon along with Pikachu?

Mr. Masuda: One of the reasons for that is that in Pokémon Yellow: Special Pikachu Edition, you start with Pikachu, and your rival begins with Eevee. So there’s that element. But really, over the years, I’ve been overwhelmed by the passion that fans have had for the character, including tons of fan art. I’ve always really loved the cuteness of Eevee. And one thing that I didn’t know until recently is that fans have unofficially dedicated November 21 as Eevee’s special day. There’s a way to pronounce that date in Japanese that sounds like “Eevee.” It just seems like over the years, fans’ reaction and passion for Eevee really made me think that it was a popular enough Pokémon to serve as a counterpart to Pikachu.

Question: How does the connection between Pokémon GO and the two Switch games work?

Mr. Ohmori: The games use Bluetooth LE to connect directly to each other.

Question: At the end of the video introducing Pokémon: Let’s Go, Pikachu! and Pokémon: Let’s Go, Eevee!, there was some text that says you’ll meet a special Pokémon, and I’m just wondering if that means something different than the Alolan Exeggutor you just talked about?

Mr. Masuda: These games will definitely have the wireless trading and battle features that have existed in Pokémon games up to now. You will, of course, need two Nintendo Switch consoles to do that kind of gameplay.

One Save File per Player:

Question: Now that these games are on Nintendo Switch, it’s possible for multiple accounts to use the same device. Can multiple people play the same game? Or will it be similar to the handheld games where you can have only one player per game?

Mr. Ohmori: You can have multiple accounts on the Nintendo Switch, so each account can have its own save file. For example, if you have siblings they can play on their own accounts.

Mr. Ishihara: We don’t have any plans to use this online service right now.

Mr. Ishihara: They’ll actually be different games as all-new Pokémon series entries, kind of like how Pokémon X and Pokémon Y, and then Pokémon Sun and Pokémon Moon, were new games within the main series.

Mr. Ishihara: At Pokémon, we really view Nintendo Switch as more of a combination of a handheld and home console system. It has the features of both, and we hope to take what was good with the handheld system and expand on it. That’s why we’re excited to bring the games to Nintendo Switch.

Next Year’s games will “focus more on handheld features and gameplay features”:

Question: You just mentioned the games coming out in 2019, and obviously we’re very excited. Is there anything else you can tell us about these new games?

What’s in it for Pokémon GO players?:

Mr. Masuda: I think one of things that will be a lot of fun is for kids who might not be able to play Pokémon GO on their own. Maybe they don’t have their own smartphone—they can play with their parents or older sibling, but they’re not able to play on their own. So perhaps players who are playing Pokémon GO can catch Pokémon and send them over to Pokémon: Let’s Go, Pikachu! and Pokémon: Let’s Go, Eevee! The kids can then raise those Pokémon on their own and get a variety of Pokémon that way.

I can also say that we have some ideas that will benefit Pokémon GO players who are interested in Pokémon: Let’s Go, Pikachu! and Pokémon: Let’s Go, Eevee! and vice versa. So if you’re playing both, there will be good things that happen in both games.

No Switch to Mobile Transferable saves for Pokémon Quest:

Question: In Pokémon Quest, will you be able to share game data between the Nintendo Switch version and the smartphone version?

Internet connectivity is not necessary for Pokémon Quest:

Question: Will Pokémon Quest require an active Internet connection to play at all times?

Mr. Ishihara: An Internet connection is not required to play either version of the game.

Making a Pokémon RPG for everyone and on Switch:

Question: This kind of follows on the earlier question about how Nintendo Switch overlaps between a handheld and home console device. What is it that you found appealing about developing for the platform? And will the games going out in 2019 take advantage of the functionality available on Nintendo Switch?

Mr. Ishihara: It’s kind of an open secret from talks with games media, and I have to apologize to Nintendo, but at the time I was definitely skeptical about whether Nintendo Switch would be successful. But really thanks to amazing games like The Legend of Zelda: Breath of Wild that drove hardware sales, I really felt Nintendo Switch was a good platform.

But of course, since Pokémon: Let’s Go, Pikachu! and Pokémon: Let’s Go, Eevee! are coming out this year, that means we’ve been working on them for a little while now. So we definitely had this feeling that we would be able to help drive this platform and increase its sales. So there’s that aspect that made us work harder to succeed.

We also saw this as an opportunity to make a Pokémon RPG for everyone, and provide another Pokémon game for those who started with Pokémon GO looking for somewhere to continue their adventure. We looked at this as a really interesting challenge to put Pokémon on a home console and see what we could do with the experience.

“Game Development does take quite awhile”:

Question: Does that mean that you’ve been developing these games since before Nintendo Switch launched in March 2017?

Mr. Ishihara: Yes, of course. Game development does take quite while!

The Poké Ball Plus:

Question: We saw that the Poké Ball Plus lights up and makes sounds. What are your future plans for this device? Do you have plans to use it in other ways?

Mr. Masuda: The Poké Ball Plus development really started after the Pokémon GO Plus came out. We started thinking about what the best Pokémon accessory would look like and feel like. We began talking with Nintendo’s hardware team, and they came up with the idea of creating the ultimate Poké Ball for players to have, and then we started talking about what that actually means. Of course, in the ultimate Poké Ball you would have to have Pokémon that go inside it. That’s kind of how we got started.

And, of course, we’ve mentioned that you can put a Pokémon from your game into the Poké Ball Plus and walk around with it. There are some cool things that will happen, but I can’t say more about them today.