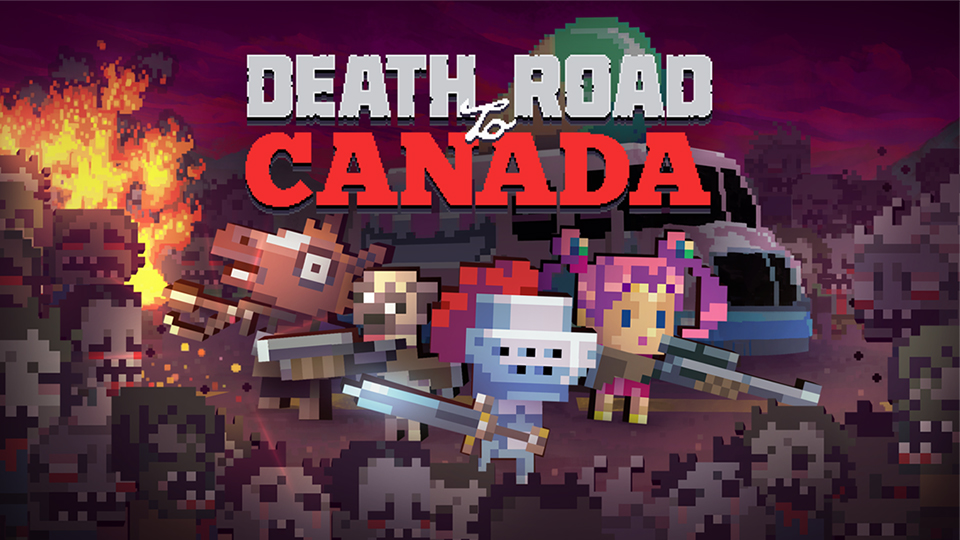 I’m going to say it now to save the hassle later – I love this game. Death Road to Canada is a game that is filled to the absolute brim with gorgeous graphics, exciting gameplay, extreme difficulty and a butt-load of charm. Whether you’re taking it in bite-sized, on-the-go chunks or looking to kill some time, Death Road will have you covered with its unique, yet charming spin on the roguelike genre.

Death Road to Canada’s main premise is essentially in the name, you create your character, team up with buddies and fight zombies while you drive up north to Ontario, Canada. On the way, you’ll find yourself looting buildings, visiting trader camps and fighting hordes of zombies in your epic struggle to survive; however, this never becomes repetitive, as the game has a way of keeping the experience fresh every time – choice.

What makes Death Road unique from other roguelikes is its RNG, text-based adventure sections – between fighting zombies and gathering important loot, you will be greeted with multiple random mini-stories involving your characters that will require careful choices. These outcomes will depend on the choice made, and the stats of the character involved. This helps bring a sense of attachment to the characters you meet and create as they all have their own individual personalities and traits, each with their ups and downs.

Speaking of characters, one of the most interesting parts of Death Road is its custom-character creator. This allows you to freely create up to 80 customised characters of your choice. This could be friends, family, or even a character from a TV show or game, the possibilities here are endless. Creating characters doesn’t just have to do with physical appearance, but you can also change their traits and skills, which depending on what you picked, will change their playstyle within the game. For instance, if your character is a Fierce Tempered Anime Fan, they’ll have the added bonus of being the most assertive on their team, with the downside of having a short temper in crucial situations… as well as being able to wield an overpowered anime katana.

During your playthroughs, you’ll find rare Zombo Points within the environment and on the road, these points allow for upgrades to skills, purchases of skills/traits and other game-changing and enhancing stats for later playthroughs. These Zombo Points and other upgradable ‘skills’ give Death Road to Canada quite the hefty replay value, as some of the purchasable skills will change each playthrough drastically, some even changing core mechanics. These, I found the most enjoyable to tinker around with, as it added some additional challenge to the already challenging game (as well as a boost if you’re finding the core game difficult).

Speaking of the core game, before starting a game you are greeted to 10 different game modes to choose from. Each of these vary in style and difficulty, and they are extremely fun to play around with, for example, one of the default game modes replace characters you’d normally meet in the game with characters strictly from the custom character creator, making the game fill with familiar names and personalities. There are also game modes that increase and decrease the length of each game, as well as game modes that increase the difficulty marginally. These different game modes offer hours of extra replay value, especially if you’re looking for a challenge.

Throughout the game, you’ll have to participate in sieges. Sieges are the main goals you’re preparing for throughout your adventure. Before one starts, you have to carefully plan your character and buddy’s playstyles and load-outs to be able to survive wave after wave of zombies for a certain specified time limit. These sieges can be brutal, whether its 2 hours in a pitch black sewer or half an hour in a claustrophobic cabin, these are where most of the extreme brutality and difficulty lies in Death Road to Canada.

One of Death Road to Canada’s most defining features is the local co-operative multiplayer. This will allow you to sync a controller and let your buddies instantly join in the journey across the States. At first, this sounds awesome – and to be honest, it is. Coop is the best way to experience Death Road as it allows you both to communicate effectively and get through problems together. However, there is a couple gripes I found with it, which I wish were implemented or fixed. Firstly, only the first player can walk through doors, which can become extremely annoying. This means if the second player needs to get out or go into a different room, they have to wait as bait until the first player comes. This resulted in many frustrating deaths and both my friends and me hated this feature. Secondly, there is no online multiplayer. This would be an awesome addition, as it would allow you to team up with friends without the limitations of one screen, as well as some awesome moments with friends.

Death Road to Canada has a neat little soundtracks – none of them actually feel ‘zombie apocalypse-y’ but they’re all fun and vibrant, just like the game. They’re all upbeat and make mowing through hordes of zombies feel fun and oddly satisfying. With the visuals, Death Road does them perfectly. The pixel art feels familiar yet extremely unique and the animations are super smooth. The game is overall just a beauty to look at and a treat to listen, which in turn makes the whole experience extremely enjoyable.

Death Road to Canada is the oddest, strangest roguelike I’ve ever played, and no matter how weird it gets, it still feels normal and oddly satisfying to see your characters complete their journey to fated Ontario. How would I describe this game to my friends? Imagine Dungeons & Dragons, Enter the Gungeon, Binding of Isaac and The Walking Dead all walking into a bar, meeting for the first time, taking the craziest, most fun-inducing features of all of them and merging them into a 181 megabyte file on the Switch.