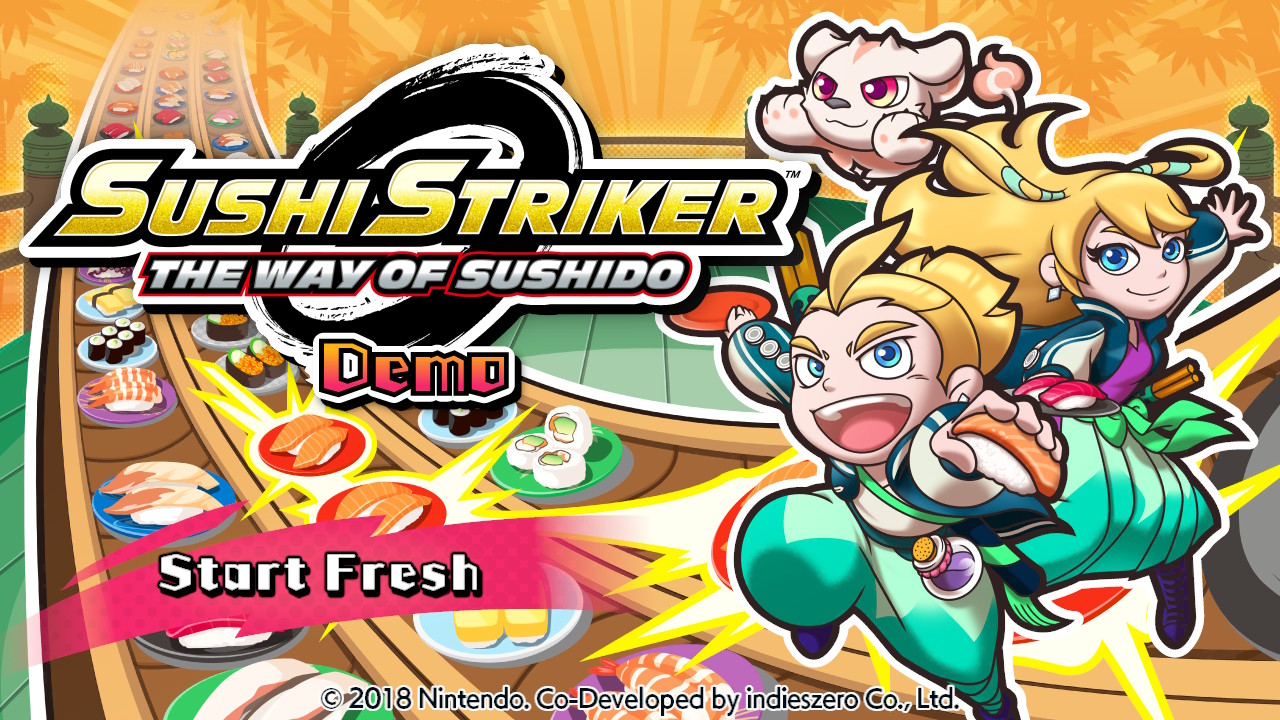 [Preview] The Sushi Buffet is Now Open! (Hands on with Sushi Striker on Switch)

When Nintendo first unveiled Sushi Striker: The Way of the Sushido, it was a 3DS title, shown off as part of the Nintendo Treehouse, during E3 2017. It was an odd-looking title that had a few of us tilting our heads and then nothing was said for a very long time.

In fact, it wasn’t until the week of the March 2018 Nintendo Direct, until a retail listing revealed a Switch release that was then officially confirmed. Clearly, a multiplatform release was a good idea as even with the success of the 3DS and the quantity of units that are in the hands of gamers, by making it available on Switch as well, the audience range has just gotten bigger, but today is the day Nintendo made their best decision yet.

With so many potential buyers still on the fence and the game releasing in two weeks, today a demo was made available in Japan and North America, so Switch owners can go hands-on with it and get a taste of what sushi has to offer. Having not had the chance to play Sushi Striker previously and actually looked forward to its release, today I got to sit down and play it and it’s certainly a game that has me divided.

On the surface, it appears as if it’s your typical puzzle game, with a storyline that isn’t all that serious, due to the nature of it and you know, sushi. But, it turns out, Sushi Striker is a lot more than that. Granted it’s not Nintendo EPD’s who developed it, but there is no doubt about Sushi Striker being you typical new kind of Nintendo title. (Like ARMS and Splatoon.)

While I have my doubts that Sushi Striker could ever aspire to have the same popularity as Splatoon, there is every chance it can be spoken in the same favour as ARMS is. It’s not for everyone, but the audience it does appeal to, can see the greatness behind it. There are instances where the game feels a little cheap and unimpressive, at least in the demo I played, but during two playthroughs, there is enough about Sushi Striker to get excited about.

From an opening song packed with unnecessarily over the top lyrics, accompanied by Japanese lyrics and anime cut-scenes, Sushi Striker only ever feels like a game half the time, as the other half, it feels like your next favourite anime series that comes packed with the usual dialogue, overreactions and hilarious animations. (In the demo alone, there are so many instances where Sushi Striker is so bad that it’s actually good.)  The gameplay isn’t that bad either.

Whether you’re using touch-controls or a controller of your choice (Pro Controller for the win,) in the over-world, you can walk from stage to stage, access a menu screen, which is where you can check out your Sushi Sprite Catalog. The catalog is a dedicated book to storing information on all the Sprites you will encounter, Sprites you have pledged with by undergoing the Sushi of Binding Ritual and there’s even a section dedicated to the different kinds of Sushi you can encounter. (In the demo, the book lists 100 different Sprites and 45 different types of sushi.) Also in the menu, you can check out the controls. See your items, your Sprites and etc.

Now, before I get into the gameplay, let’s talk about the plot quickly. “Sushi isn’t just something to feel your bellies with, it is pure joy,” a joy that has caused a fallout in humanity and led to a war over sushi, which the Empire has won. At least, that’s what they think as the battle is still being waged, but it still doesn’t change the fact that boy (or girl if you wish to play as a female) has had to grow up without their parents. It is the child Musashi, who players can expect to play as and if you’re curious, Sushi Striker does have localised voice acting and you will be hearing a lot of it.

Sushi Striker: The Way of the Sushido is essentially the tale of Musashi’s quest that will see him go from trying to find food, for the children of his village to eat, to a chance encounter with a Sushi Striker and his/her first taste of Sushi. From there it’s all downhill, as across 6 levels, Musashi will have to learn the ways of a Sushi Striker quite quickly, if he/she hopes to have any success in rescuing Franklin and overcome one-on-one battles against CPU opponents.

In the demo, all 6 levels that are playable, are all straight up battles that require you to link as many plates as you can, to stack up plates, that can then be used to attack your opponent with. Both players have life bars and once yours or theirs, hits zero, the battle is over. To make things a little bit harder though, the plates you will need to match, are on a conveyor belt, so just because you can see a bunch of plates clearly one minute that are all matching in colour, they’ll soon be gone if you don’t act fast.

So, when battling away in a Sushi Field, (a place where Sushi flows from Sushi Sprites,) be sure to move the control stick, whilst holding the A or Y buttons, to link plates. You will have 7 seconds to link together as many plates as you can, with a rainbow coloured plate, appearing once you have 7 chained plates. During the battles though, you are not alone as the Sushi Sprites will come to your aid, via the use of their skills. Sprites have different skills to one another and up to 3 Sprites can be taken into battle, with the directional buttons being used to activate their given skill, once their meter has filled. (You can fill it by eating the sushi you chain.)

Using each skill at the right time can be the key to victory, so always be sure to act accordingly and strengthen when you have the means to do so. (Completing levels can see you rewarded with EXP and Skill tokens that can increase the Skills and EXP of you collected Sprites.) Also, since both your Sprites and player can level up, should you find a level too much, too soon, you can always replay one you have beaten already to try and S rank it by scoring as high a score as you possibly can and getting all 3 Stars for completing missions. Not only does a higher score mean something to brag about, but it can earn you more EXP as well.

Now, given the fact the demo is short in nature, it does do a good job of showing off what Sushi Striker is, how it plays and most importantly, allows players to get a feel for it. If you don’t like the demo, it just means the game might not be for you, but if you do like it and you want more, there is only thing you can do and that is to buy it this June. I know I will.