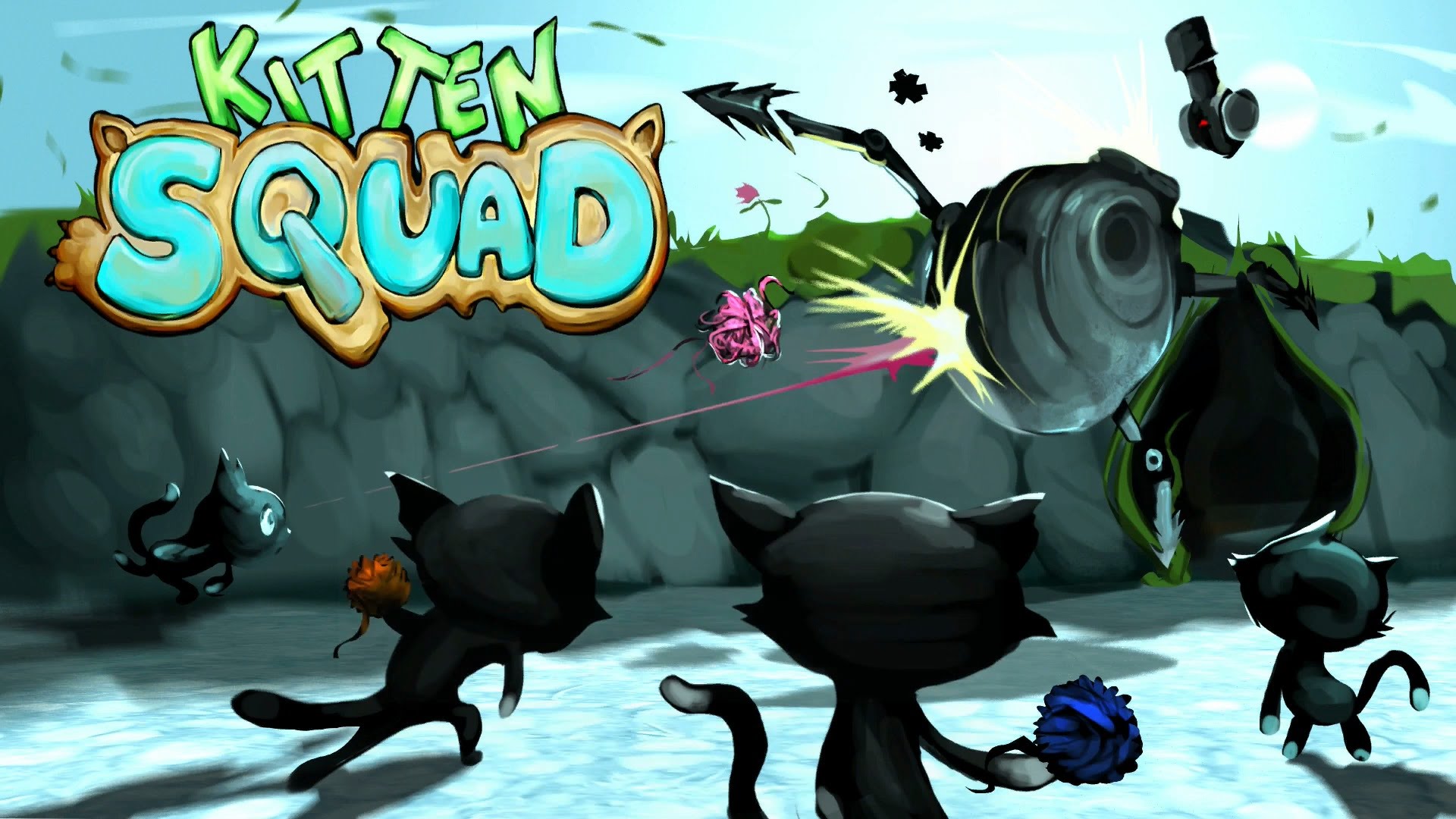 Warning! Many digital kitties and robots were harmed in the making and writing of this review!

Although we make an exception for mobile applications, at Miketendo64, we don’t make a habit out of reviewing free to download games, but given today’s subject matter, how could we not review Kitten Squad? So, recently brought to the North America eShop, for the Nintendo Switch, Kitten Squad is a game that’s been around the block a few times. It’s released on the PlayStation 4, it’s debuted on Steam and has even come to mobile devices. But, now that it’s out on Switch, Kitten Squad is a twin-stick shooter published by PETA.

Now, there’s a good chance a few of you reading this, might have rolled your eyes and scoffed at the mention of PETA and you are in your right to do so (freedom of speech and opinion,) but regardless of the bad taste PETA might leave in your mouth, how about we just focus on the game and what it exactly it has to offer to the player, since at the end of the day, Kitten Squad is a multiplatform video game.

So, as a shooting game, Kitten Squad comes with the usual features, there is a story, in-game currency, quests and even alternate skins, so while you can start Kitten Squad off as a kitten, you can proceed to unlock various colours, robot and gold, and eventually end up as a Crocodile, Elephant or even a Monkey. It is these skins you can expect to spend your Kitty Coins on. You can also buy new headwear and glasses.

As for how to earn the Kitty Coins, they can be acquired 4 different ways and they all involve you playing the game. The easiest is to kill the robots that lie between you and the animals you are meant to be saving and collect the coins they drop. The second easiest is to destroy the crates present on the screen. As for the other 2, one is to complete the side-quests that can be selected whenever at camp and ask you to do things like destroy a certain number of a specific enemy and the other is by completing the story missions. Because of these story mission, Kitten Squad is a game of 14 main quests. Animals such as dolphins, whales, seals and sheep have been abused and kidnapped and it is down to you to save them, one animal at a time.

While most missions do end with you just having to save a specific animal, there are boss fights and even missions where upon reaching the final room, you then have to proceed to defend Elephants from circus bots for 10 Waves. Out of the story missions that can be selected, players are free to pick whichever one they wish, in any order they want, but only one can be selected at a time. The reason for this, is because the mission you choose, determines the path in which you will be able to take. Should on particular story prove too much for you, you can always abandon it for an easier one. Unless you have friends.

Provided you have three other players to play with, the kitty adventure can become a lot more fun as all four of you work together, running wild, blowing the heck out of everything you see. The game is also easier this way too, as Kitten Squad can be a bit of a roguelike as you only have one life to complete your current story mission and if you run out of kitty-shaped hearts, it’s back to the beginning with you. (Don’t worry, defeated enemies can also drop hearts so collect them whenever you can.) However, in co-op play, provided one of you are still alive, the other players can resurrect naturally, but it takes a bit of time for them to respawn.

To make things a tad easier for you, there are a few different weapons you can wield that can either improve your chances, or worsen them, so, whenever you have the chance to choose between the gun that fires reflective lasers or a yarn ball cannon, always pick the lasers. The lasers won’t hurt you, but they will hurt the many robots you will encounter. You will need to kill every single enemy present on the screen, in order to proceed to the next area and keep going. Oh and just in case it wasn’t obvious, since I never mentioned how to fire before, because Kitten Squad is a twin-stick shooter, the left stick is used for movement with the right stick being pushed in any given direction to fire in said direction.

Now, although we did go over the story missions, there is something else that needs to be mentioned about them and Kitten Squad and this is where PETA comes up into discussion again. You see, every mission is inspired from PETA’s real-world exposés of cases concerning baby elephants being held captive by the Ringling Bros. circus and more. Every story also in the game also has a cut-scene to go with them, so are letting a child play this, you will have to be prepared for them to see a side of humanity you generally try to shelter them from, until they’re old enough to understand. Especially since there is an educational side to Kitten Squad, but again, the teachings are something you will need to experience for yourself, to decide if it’s suitable for your children. Just because Kitten Squad looks like a game, sounds like a game and acts like a game, it is still an advocacy title that pushes PETA’s beliefs and goals.

Whatever your feelings towards PETA are, the fact of the matter, is with Kitten Squad being a game you can download for free on your Switch, it really doesn’t matter what anyone thinks of it. It’s a game you can easily just play yourself and give your own verdict, but as this is a review and this is the conclusion, here’s my two cents worth: Since it is a free to play game, it was never going to be fantastic and due to the animal cruelty tone that is present throughout, it’s not a game you should expose to children below the ages of 10. But, should you have 10 minutes to spare and wish to play a shooting game with a bunch of friends, or on your own, Kitten Squad is not the worst choice in the world and nor is it a lazy port as video capture and single Joy-Con play, is supported.