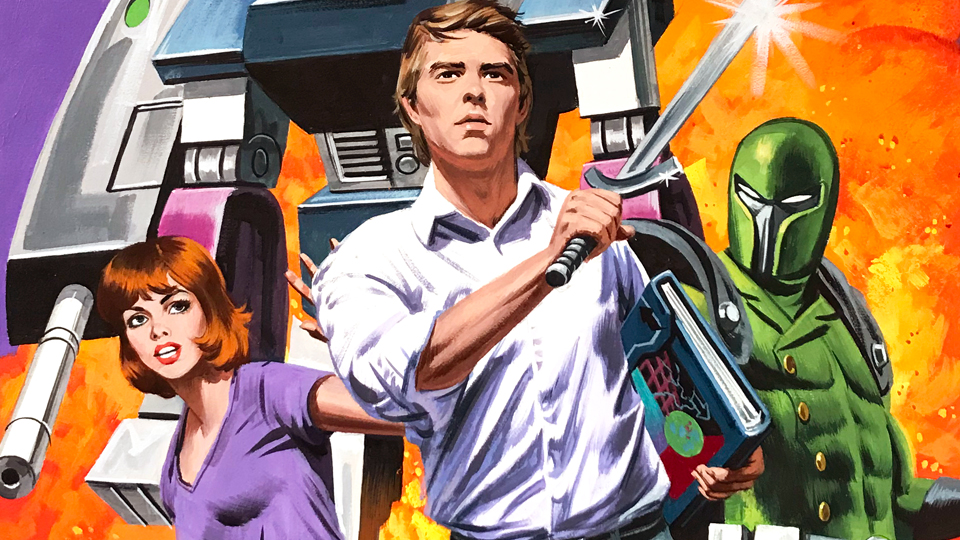 Does Saturday Morning RPG give you a reason to wake up early or is this one better forgotten?

Saturday Morning RPG was created by developer Might Rabbit Studios who have also developed about a dozen other games in the last decade for iOS, Android, PC, Mac, Xbox, PlayStation and now finally for Switch. Saturday Morning RPG was originally released back in 2012 as an iOS game and then across various other platforms. With its rich legacy available to other platforms it’s no surprise that this nostalgia-filled game finds itself a home on Nintendo’s latest console, the Switch. But is this a game worth a rerun or has it run its course?

On the story front, SM:RPG is a melding if pop culture from the 80’s and 90’s crossed with a turn-based RPG that really is the summation of all of its parts. The story launches you right in as you take control of Marty, a high school student who gains power through a Trapper Keeper-esque notebook complete with scratch and sniff sticker power-ups and some of the wackiest special moves ever seen in a video game. Throughout the campaign, you will find yourself battling enemies reminiscent of G.I. Joe baddies, 90’s cartoon lizardmen, and sub and main bosses that make you smile due to the homage they are giving old movies.

Saturday Morning RPG isn’t a new game IP, as it made its way onto consoles and mobile devices years ago, but it remained unnoticed by me until it showed up in the Nintendo eShop. I will say that as I began my journey as Marty and was introduced to its gaming conventions I was a little put off from the outset. I felt in the beginning of the game that I was unsure of what the game designers and developers wanted me to do as the early game mechanics were more trial and error as the game never really taught me about the game’s controls and gameplay while telling me the story through cut scenes and text bubbles. Saturday Morning RPG stumbles and stutters through what ultimately is a shaky entry into the (J)RPG genre.

Moving on to content, SM:RPG is full of character and content that streams from what seems like an endless abyss of 80’s and 90’s references. The amount of enjoyment you get out of that, or even understand the references from, will depend on your age. I am 35 and was a child in the 80’s/90’s that a lot of the pop culture references come from. If you skew younger you may not get a lot of the quips and references unless of course, your parents subjected you to those things as you grew up yourself. Initially, I was very intrigued by the art style of SMRPG and the quips and quirks that relevant to me, as a child of the 80’s, I kept thinking who is this game for? The game hinges a lot of its art and dialogue on 80’s and 90’s pop-culture references some of which are apparent from the outset, while some are more ‘hidden gems’ of the decades that made my childhood bearable.

To its credit, Saturday Morning RPG does sub-plant itself firmly in the ground as a fun-filled voyage through its chapters that are aimed solely at your 30+ crowd that loves their cartoons, movies, and musicians of yesteryear. Now whether or not that is enough to keep you hooked on that hook alone is going to probably make deciding to pick this game up an easy buy for you or something that you’d catch only on a discount. The game itself kicks off with a nerd being bullied and thrown into a fantastical story of get the girl, save the world, but wraps it up with 80’s cartoon references, homages to movies like Back to the Future and a dance move beat down right from Michael Jackson’s own backhanded glitter glove.

The presentation in the game is told through small cut scenes that have decent enough artwork to put it somewhere between SNES/SEGA pixel art and a colorful episode of your favorite Saturday Morning cartoon series. The major sell for me in this game is its colorful art, unique animations, crazy set of power-ups and moves and video game representations of some of my favorite childhood cartoons. There is even a small mini-game at the start of your fights that assigns special power ups to your character through your school binder and its scratch and sniff stickers. Between this and the quick-time event moves that power up your punches and can unleash things like a “Zebra Stripes” gum-inspired Zebra stampede, to MJ’s moonwalk backhand, to a [Transformer] Optimus Prime stomping. Your standard punches even have a timed button press mechanic which made the fights more engaging as you couldn’t just sit back and watch the fight unfold.

With regards to in-game ear candy, SM:RPG does enough with its sound design and music to feel like the 80’s/90’s emulation is spot on, but there weren’t any memorable tunes in the game that stood out to me as music I wanted to listen to outside of the game itself. Along with music there are sounds that come along with the gameplay that fit, but again, don’t stand out as all that immersive to me. The special moves do offer a bit more in terms of sound design which help to emphasize the quirkiness of Michael Jackson’s glove slap or the obvious Transformers like special move among others.

As fun as that all sounds, I think Saturday Morning RPG comes with some inherent flaws of games that are first in a series. The game just throws you in with not so much as a tutorial. And while you lose your first battle, similar to the first battle in Super Mario RPG; there isn’t much to teach you in terms of the moves and what they do, or how best to approach a fight with certain enemies. Some people may be turned off by the trial and error, teach yourself to fish, learning curve, but if you stay with it, I promise you there is a fun nostalgia ridden game that will be worth at least one playthrough.

Your quest to the end isn’t a long one, but along the way you will learn new moves, which require you to choose which power-ups you want to stack your character with. I felt like this mechanic was put to better use in the mid to end game as the enemies got more difficult but there was a balancing for the abilities you have and how best to allot their usage. Balancing RPGs and their progression mechanics always seem hit or miss on games and SM:RPG mostly gets this area right.

This game really caters to two different audiences, though there may be some crossover, which is essentially Saturday Morning RPGs greatest player; the 80s/90s references are going to go over some people’s heads, and that is ok, it’s at least a fun journey through pop culture that anyone can appreciate. The second type of gamer that this game is for is the person that likes core RPG games with the standard types of gameplay with a new coat of paint. SM:RPG doesn’t stray too far from the points system and battling seems familiar enough if you have RPG experience. What sets this game apart though is the world in which it attempts to build, which is builds well enough that if you’re the 80’s/90’s gamer now in your 30’s or so, and you like RPGs, you will like this game.