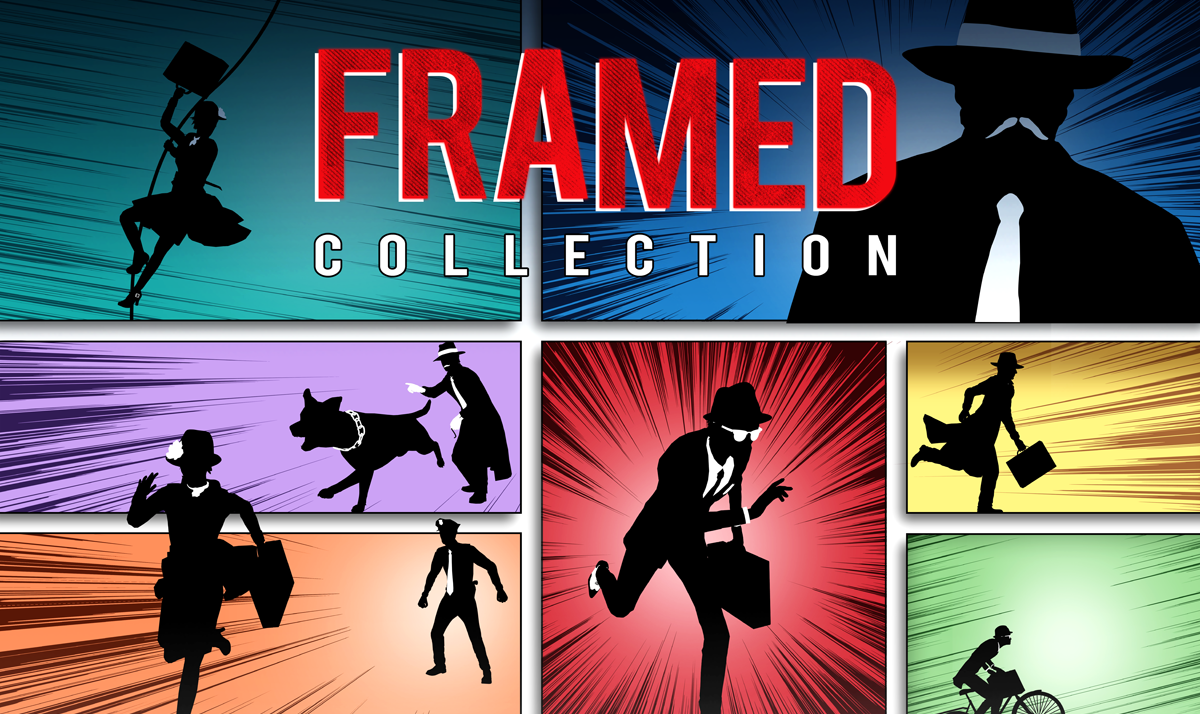 Framed and Framed 2 were fresh and intriguing takes on the puzzle genre when they were initially released in 2014 and 2017 respectively, and deserved all accolades they were given. I even remember Hideo Kojima giving the first title praise for its robust and unique ideas on the puzzle genre. Framed, and it’s follow-up Framed 2 which was a prequel, were only available on iOS or Android, but thankfully developer Loveshack Entertainment have released both games as the Framed Collection on the Nintendo Switch.

The central idea behind the Framed Collection is a unique experiment on interactivity that actually works very well. You will be rearranging panels in an animated comic to lead a fleeing crook through digital pages. There are new ideas implemented as you work your way through its narrative, letting you twist panels and reuse frames multiple times while a scene is running. By the end of both titles, you are practically switching the panels around trying to avoid your character taking a bullet to the chest.

In the Framed Collection, things start off simple, with you dragging frames around and putting them in the order you think will work. Your character will need to sneak past guards, tiptoe along ledges, and have to remain ahead of his pursuers in order to successful drop off the contents of a mysterious package he is carrying. The deeper you get in the Framed Collection the more it plays around with these ideas.

One section may see you running through a maze with guards at every corner and you need to create a path to get past them. Each one of the pages has its own surprising element with some feeling slammed barely noticeable, while others are grand and often accompanied by an “a-ha” moment. There’s a real noir feel to both titles with many characters wearing trench coats and jazzy mysterious music playing in the background. Cigarettes spark in the gloomy alleyways and no one is who they seem to be.

There is a surprising pace to the Framed Collection with your character most of the time always running or sneaking out of the shadows into the next puzzle segment. Failure only resets your progress across a single page and this lets you jump right back into trying to solve the puzzles again. If you know a solution won’t work, simply pressing the B button will restart the whole sequence again and pressing the X button will fast forward your character’s movements to cut out unnecessary downtime.

Though some of the ideas are used too frequently, the Framed Collection never felt repetitive. The gameplay mechanics are switched around frequently and the outcomes are mostly surprising given that what you expect to work always isn’t as it seems. Failure is almost worth trying, just to see the full animations on display. One in particular that has your character falling off a roof tripping on a pile of logs is pretty comical.

The difference between Framed and Framed 2 are minuscule, with no major new additions other than improving on the first game’s mechanics by possibly adding a third vertical path or a maze of rotating panels. The Framed Collection can be played in either handheld or TV mode, but I preferred handheld mode due to being able to use the touch controls making switching panels more intuitive. Overall, I was impressed with the Framed Collection’s sense of style and simple, yet satisfying puzzle solving gameplay.

Both Framed and Framed 2 aren’t the longest titles, capping in at about three hours between the two, but they never outstay their welcome. It’s less about the challenge and more about experiencing the brilliant and simple ideas Lovesick Entertainment have concocted. As long as you have not played either title on mobile, the Framed Collection is as fresh a puzzler as you will probably experience on the Switch this year. It’s brimming with confidence and swagger, having you transfixed from the first time you swipe the panels to the last.