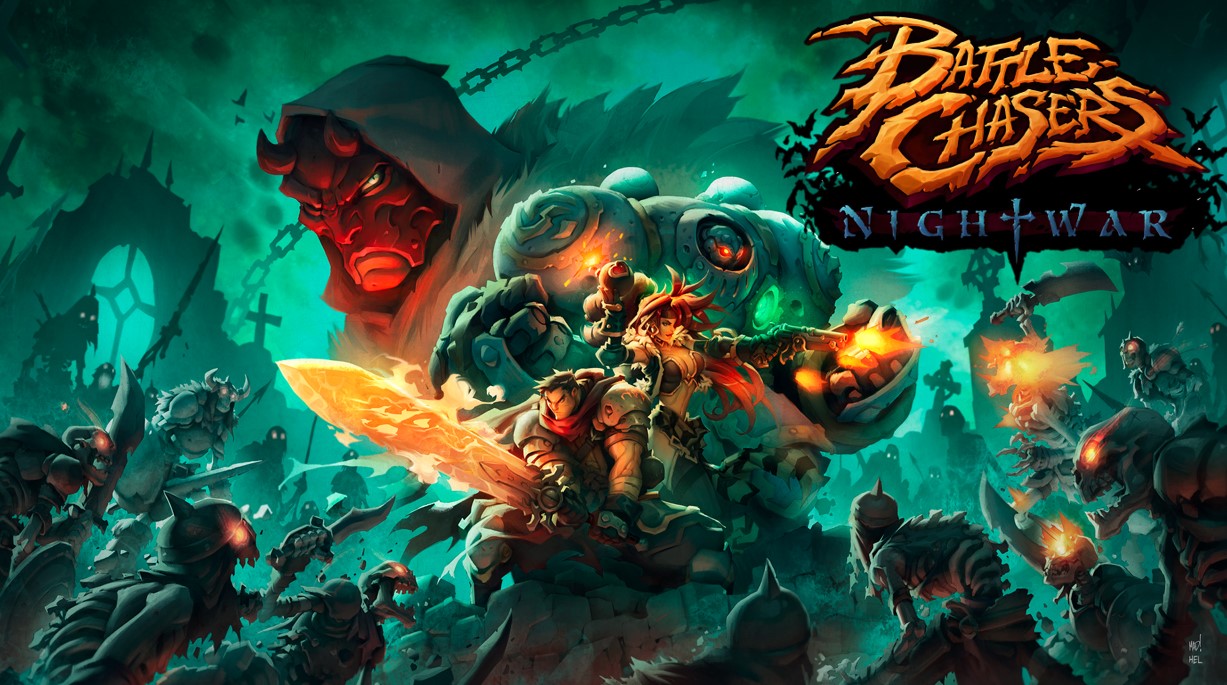 Western twist to the JRPG formula.

“Battle Chasers” is like one of those great tales from long ago that still lingers with you. Like that great bedtime story, your mother used to read to you at night, transporting you to a fantasy world as soon as your eyes refused to open.  It invited you to grab the handle of a broom, automatically turning it into a sword, and your blanket wrapped around your neck to simulate your protective cloak, transforming you into one of the heroes. Battle Chasers was a comic book able to wrap you inside its fantasy world like none other, and then it disappeared just as fast as it came.

The original comic book by supreme artist Joe Madureira and published first under Cliffhanger comics featured art that combined American comics with Japanese manga, or fusion art, which allowed the artist to express the emotion of the characters as well as display a mastery of action during battles that were second to none. As soon as the book was released, it would consistently place among the best-selling comic books in the U.S., with hundreds of thousands of enthusiasts rushing to capture and devour Madureira’s world. But it wasn’t nearly enough to satisfy everyone.

The downside to the amazing comic was that it suffered from extensive delays sometimes spanning half a year between releases. And ultimately, after just 9 issues, the comic book was delayed indefinitely, with the last issue releasing back in September 2001. Ever so often the creator would talk about wanting to go back and finish the story, or that he was working on throwing some art together, but nothing ever came to fruition, and we made peace with the fact that Battle Chasers was destined to never return.

It wasn’t until over a decade later, and after two successful video game releases that the opportunity to return to the world of Battle Chasers presented itself. Having been an original founder of Vigil games, Joe Madureira worked on Darksiders and Darksiders 2, which collectively earned critical praise and sold over a million copies each. Vigil Games had been acquired as part of the THQ family and ultimately went under after the company filed for bankruptcy.

Finding himself out of a company, he gathered his ideas together, co-founded Airship Syndicate, and dug into his own bag of tricks, deciding that it was finally time for the world of Battle Chasers to return to the spotlight. What had originally started as a comic book, with young Gully running for her life while holding the magical gauntlets belonging to her father in a box, was now getting ready to return as Airship Syndicate’s initial video game offering.

And so it beings…

If you find the little backstory before the actual review a little overbearing, it is because I’ve been a fan of the comic book series ever since it first debuted and I can’t help but channel my excitement to be able to continue this journey in video game form (and issues 9-12…eventually).

Battle Chasers: Nightwar takes form in a special kind of throwback to 1990’s turn-based JRPGs, with an overworld to explore and many beasts to defeat, while you guide your band of heroes in search of the missing spell-caster extraordinaire, Knolan, who has disappeared after an airship battle. The game was originally announced as a “First on Nintendo Switch” release but suffered from delays trying to get the Unity engine running properly on the Switch, and ended up releasing first for PC, Playstation 4 and Xbox One on October 3rd, 2017.

Deciding to make the game a turn-based RPG makes perfect sense because it allows the visual presentation of the comic book to make a faithful transition to the game using animated cut-scenes, hand-drawn overworld maps, and comic book frames for the dialogue. But the battle system is the highlight of the game, rewarding you by spending the time to unlocking different abilities and skills.

Battle Chasers: Nightwar is an uncanny representation of Joe Madureira’s artwork. Much like Darksiders, you can see his unique art-style all over the game. But where Darksiders was more of a 3D take on his art, Battle Chasers: Nightwar represents a direct transition from the comic book pages to the screen. Everything on the game seems to be hand-drawn, and even when looking at the 3D characters on screen, you can’t help but feel like Madureira personally illustrated every single inch of the model.

Although the action unfolds in turn-based form, the game offers a good amount of variety between all of the characters you gain control over. Each has their very own unique animations, skills, and special abilities, so they all feel like different characters and not the same one with different skins.

For fans of the comic book series, you will feel right at home when playing the game. Be it during battles, conversations, traveling through the overworld, or just looking at the menus, this game is 100% Joe Madureira’s artwork.

The visual presentation on the Nintendo Switch screen is a faithful representation of how the game looks on the TV screen, but there are some downsides to playing in handheld mode. The game already experiences a significant amount of load times which become somewhat longer when playing portable. Because the characters on-screen are already small to better display the world map and paths to take, it can be hard to see on the smaller screen. Also, some details are harder to see, especially in the darker areas.

Although this all sounds like a negative, the fact that you can take the game with you will allow you to dedicate more time to level up and explore its surprising big world. There are many dungeons to visit and beasts to fight, although you will get to a point where the game asks you if you want to engage a best or just ignore it, which is good for people that want to experience the story faster, but could be a hindrance when you find yourself too weak to fight higher-level enemies.

Battle Chasers: Nightwar is not a simple Indie game but closer to a classic JRPG with a fresh coat of paint. It represents what games like Final Fantasy IX, Xenogears, and Chrono Trigger could look like in present times, if the companies took the time and care to update them to current visual styles. The game by no means feels like a copy of something else because the characters and the world are very unique, but the familiar JRPG formula does remind you of previous games.

Battle Chasers: Nightwar is a special kind of game not only because it delivers a very satisfying turn-based JRPG experience brimming with a spectacular art style,  beautiful graphics, great presentation, and robust battle system, but because it gives Battle Chasers fans the opportunity to tag along next to their favorite group of ragtag heroes. You can speed through the game and complete it in close to 30 hours, or close to double that amount if you are the completionist kind and need to branch off in every possible path and try to investigate every nook and cranny. Regardless of how you choose to play Battle Chasers: Nightwar, it is a very satisfying experience. Battle Chasers: Nightwar releases on the Nintendo Switch on May 15th.