[Review] Where Are My Friends? (Nintendo Switch) 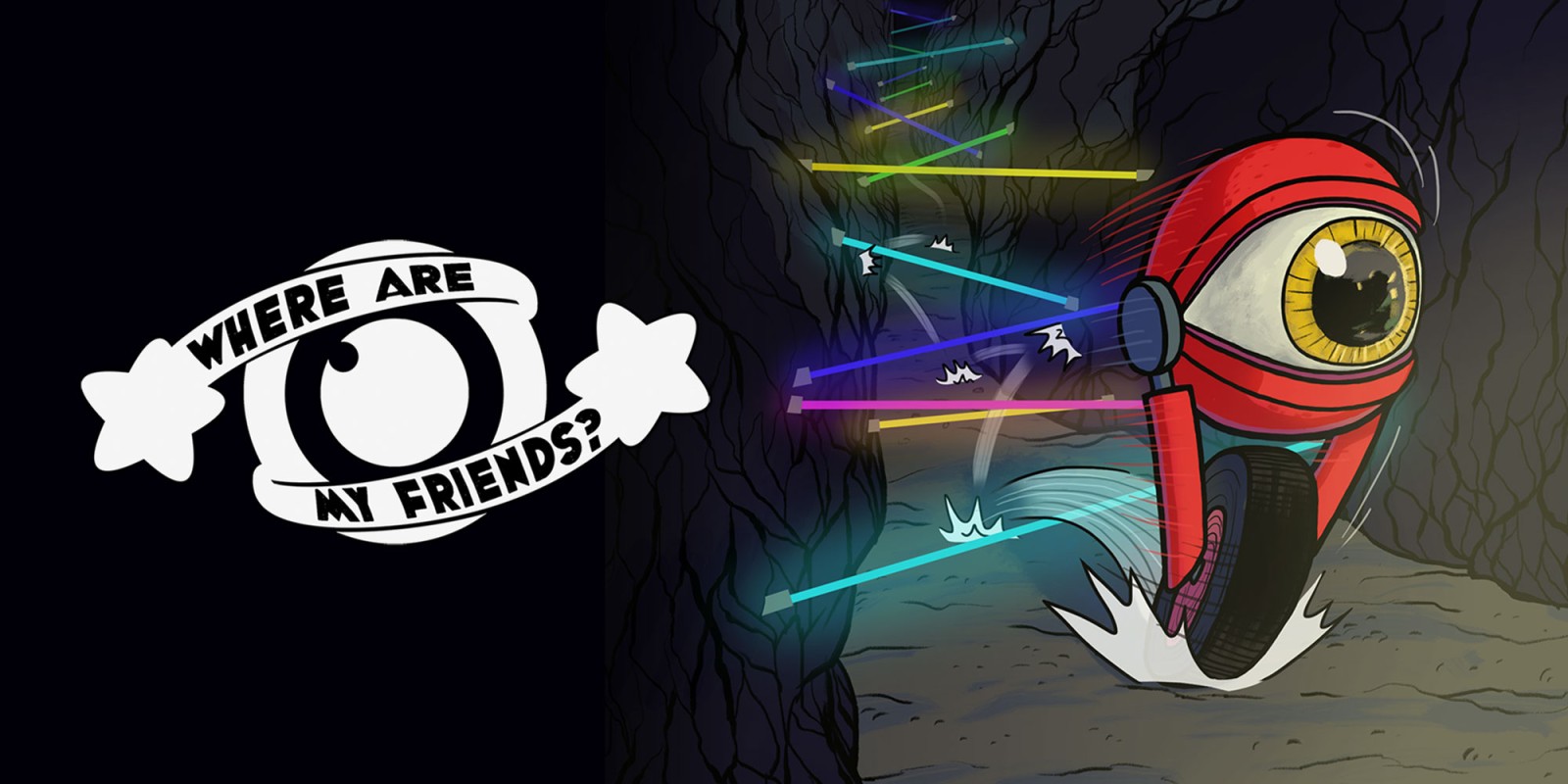 Where Are My Friends? is a game that encompasses several different genres into one. The game itself is about four levels long, challenges that are point-and-click puzzles, platformer, arcade, and adventure. The story is inferred via images and the music rather than words, showing rather than telling you what is at stake.

It’s a different game using the various genres and even art styles to display the game and keep it catchy and eye-appealing to the player. Once you learned one way to play, you had to switch it up which kept you on your toes and wondering what would happen next.

The first level was a puzzle. You had to go from one room to the next avoiding lasers and trying to figure out how to get through the room by going through multicolored teleportations and odd platforms placed about. Once you made it to a new room, there was a light which was your respawn point. Wheye dies a lot in this game, but there’s no death counter or lives or continues. You simply respawned back at the beginning of the current room you’re in and keep trying. This level was mostly about timing and if you were off just a little bit, Wheye would get sliced by a laser.

The next level was a runner. Wheye kept moving across the screen and it was up to you to help him jump or dodge obstacles. Some sections of this were automatic side-scroller while others were a birds-eye view of Wheye. The latter section was a bit disorientating at times, as there wasn’t much in the way of depth perception, but it was interesting nonetheless.

The third level was a point-and-click game. Wheye had to go through multiple weathered rooms – a sun room, rain room, hail room, fog room, etc. – gathering items and placing them in different areas in order to get through more rooms and figure out the puzzle. This level took us the least amount of time. It was easier than the other levels, but the puzzles were well done. We did have to restart once though because we did something out of order and we weren’t able to fix it.

The fourth level was an adventure platformer. Wheye is underground and has to traverse through multiple tunnels in order to activate specially colored generators in order to open the door at the end of the level. Precise jumps and patience were the keys to this level. Like the point-and-click level, the platformer did need to be restarted at one point due to us realizing that some platforms that were supposed to move had froze. Other than that hiccup, though, the level wasn’t too bad at all.

The graphics were bright and smooth throughout the whole game. One of the levels was almost crayon-like and was rather charming. They were very well done, allowing us to marvel at them as we went about our way with the levels.

I really loved the hand-drawn level. It added so much more to the game and to the story as well since there was a reason behind it. The homebase and each of the four levels had their own tune. All were catchy, though the levels could take a while in which the song would loop over and over again. The beats were catchy, but sometimes the music was starting to get to me.

Wheye, our one-eyed robotic protagonist, is on a journey to save his friends. There’s four of them all together and he journeys through four different levels to try to find and save them – all before the sun explodes.

The friends were graduates together, all becoming scientists, and most likely searching for ways to help an alien planet. One friend was more technology inclined, another experimented with weather, a third with the creatures of the world, and a forth seemingly interested in the natural properties — plants and soil — of the planet itself. Wheye appeared to be in charge of the home base. Together, they had created a force field to protect the planet from the unstable sun.

Of course, the aliens have seemingly taken your friends one by one. You learn bits and pieces of what happened as you go through each level in search of your friends to save them. The story is told through comic-strip-like pictures rather than words. They were easy to dicipher and piece the story together.

Where Are My Friends? is certainly a challenge of a game, keeping you invested in the story without any words. Each level itself was fun to play, especially since the game switched up the genres between the levels. However, there isn’t much leeway when it comes to completing the levels — once you’ve solved it once, there wasn’t much incentive to return to them. Yet, perhaps we’ll return to it one day for a challenge.

This was a great game. It was challenging and a lot of fun, especially when you play with a friend (despite it being a one-player game). There were quite a few frustrating moments but we had a good time overall. The ending was well done, though there wasn’t much to it. Once the game ends, the credits roll and it’s back to the main menu. There’s not much else to it, but it’s certainly worth a try and worth the price of $5.99.

One thought on “[Review] Where Are My Friends? (Nintendo Switch)”