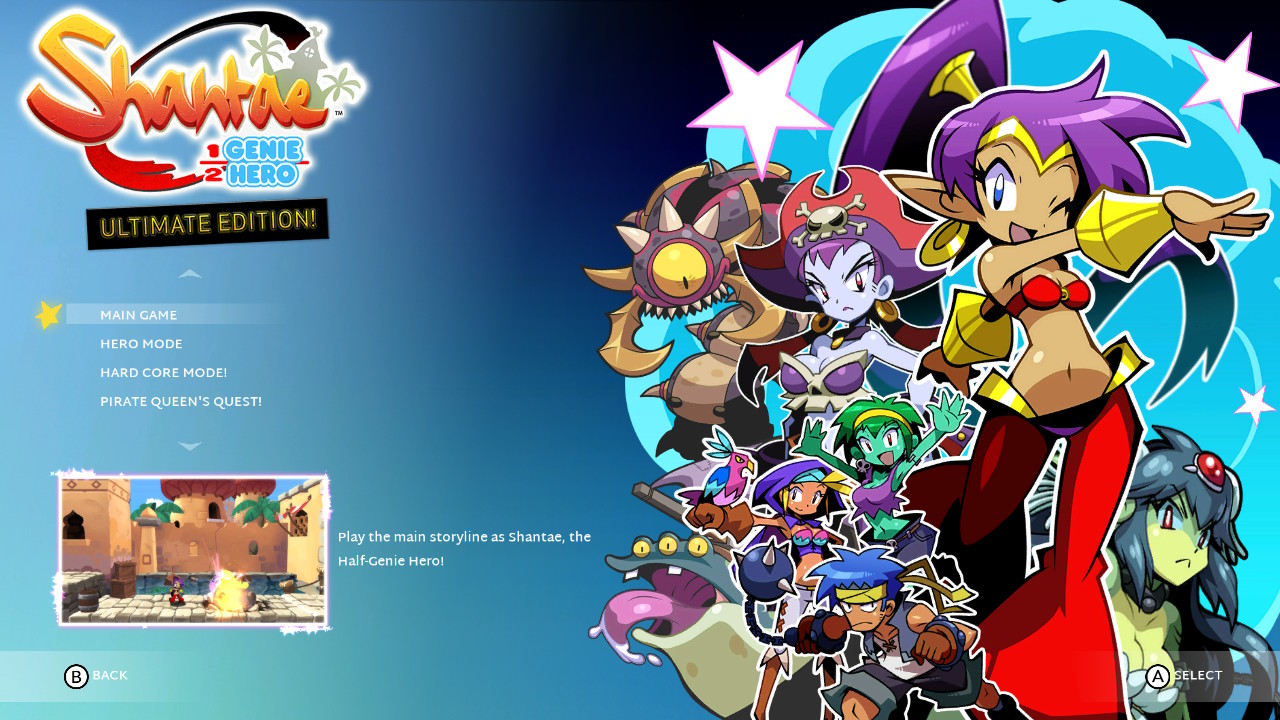 When it comes to the Shantae series and the Nintendo Switch, in recent months, series developer and publisher WayForward, have brought over a whole load of goodness. First, there was the Switch port of Shantae: Half-Genie Hero, but since then, 3 different DLC packs have become available, to expand on the Half-Genie Hero experience and a port of Shantae and the Pirate’s Curse. Only, the Shantae releases aren’t stopping anytime soon, as even though there has yet to be news of the first 2 Shantae games getting ported, Half-Genie Hero still has more in store for us.

So, because we have extensively covered the Shante series, especially when it comes to Switch and Half-Genie Hero, here is one final review of the finest game in the Shantae series, which will focus on the differences between the game and DLC we’ve got already, Shantae: Half-Genie Hero Ultimate Edition and Shantae  Half-Genie Hero Ultimate Day One Edition. First and foremost, Shantae: Half-Genie Hero Ultimate Edition is a near likeness to the Half-Genie Hero we’ve seen a lot of already, except this digital only release, actually comes with all of the DLC from the get-go, instead of players having to buy the original game and then buying each one of the DLC packs. (Pirate Queen’s Quest, Friends to the End! and Costume Pack.) It also happens to allow buyers to have access to the once exclusive Tinkerbat transformation, which was available as a reward to backers of the game’s Kickstarter campaign. The Ultimate Edition also comes with the Blue Shantae and Classic Risky Boots costume that were also previously campaign classics.

Now that we’ve got the differences cleared up though, let’s talk about the actual game and gameplay, which admittedly, will be a rehashed version of what was penned for regular Switch released, with the inclusion of details relating to the other modes. So, for those of you who are unaware, the Shantae series is a game about the female protagonist Shantae, created by Matt and Erin Bell (now better known as Erin Bozon after Marrying Matt). Shantae is the daughter of a Genie, and the Guardian of Sequin Land. A Half-Genie Hero who has battled her fair share of monsters over the years and now she with yet another action platformer, adventure and she has never looked so good. Purely because of the fact that for her fourth game, Shantae was brought kicking and screaming into the present, thanks to a completely revamped HD design that does Shantae and the world she exists in, absolute wonders.

Not only does the game look great, but it plays great too. With her Genie powers back after the events of Shantae and the Pirate’s Curse, and her transformations are even better than ever. Sure the likes of her Elephant form and Monkey form make a return, but there’s a Harpy form that really lets you take to the skies, a Mermaid form that lets you explore the depths and even then that’s just the tip of the iceberg of what Shantae can turn into this time around. There’s also the incredible boss battles, which features one gigantic, chained up green Mermaid Queen. A certain Squid Baron makes a return and is just as cute as the dialogue Half-Genie Hero possesses and yes it is cute. It’s also humorous and even the story is pretty good. On top of that, the use of a hub world is better integrated this time, there are vital side-quests that will enable you to advance through the main story and a whole lot of collectable items in each area. There’s also support for HD Rumble, touch-screen controls and Video Capture and a soundtrack that is to die for.

Admittedly, the main campaign is a bit fast-paced and short, as depending on their skill, players can blitz through it with a 100% completion rate in less than 6 hours, but don’t forget about the extra content. Thanks to Hero Mode, Hard Core Mode, Pirate Queen’s Quest, Friends to the End!, Ninja Mode, Beach Mode and Officer Mode, you will of course, be able to get at least 20 hours out of the complete package. A package which by the way, that won’t just have you play as Shantae, but also as Risky Boots, Skye, Bolo, Rottytops, Beach Shantae, Ninja Shantae and Officer Shantae. Plus, each character has their own way of getting things done, so there is plenty of variety to be had and although some will make things a lot easier than others, you will have your work cut out for you, if you wish to beat every mode, but even when dying, you will enjoy every minute of it.

However, because the characters do differ, as do their associated modes. Not all of them use the hub world aspect, the DLC campaigns are a lot smaller than the main campaign, and there are different rules to be had. For instance, Friends to the End! Will have you need to play as three different characters and swap between them when faced with certain puzzles. Some modes use a level up system, heavily dependent on Gem collecting and my god, there are Heart Squids. So many Heart Squids to collect that you’ll have your hands full doing just that, but I can honestly say you will get your money’s worth buying the Ultimate Edition, if you haven’t brought Shantae and all the DLC already.

So, whether playing in handheld or in TV mode, Half-Genie Hero really is truly divine, just like it was when playing on the Wii U GamePad, for my first playthrough. As for the best way to play it? Hands down is with a Pro Controller, but failing that, with Joy-Con Controllers in the Joy-Con Grip, with the Switch in TV mode. Yes, it can be played on a small screen, but there really is nothing quite like experiencing a Shantae game on the big screen with the volume as loud as you want it to be!

Like I have said before, even without all the extras, Half-Genie Hero is hands down the best Shantae game in the series. It is Shantae doing what she does best, but there is a reason why the Ultimate Edition, has Ultimate in the title. It’s Half-Genie Hero at its finest and if Half-Genie Hero was a Zelda game, it would be Breath of the Wild. (Or at least A Link Between Worlds.) It’s the game changer WayForward needed to make, so, although I shouldn’t have to say it, I would happily recommend it to everyone looking for a new action/platformer title to play. Should you wish to know more about its various campaigns, then why not click here, here, or here, to be taken to our in-depth reviews of the extra campaigns? You will walk away well-informed.