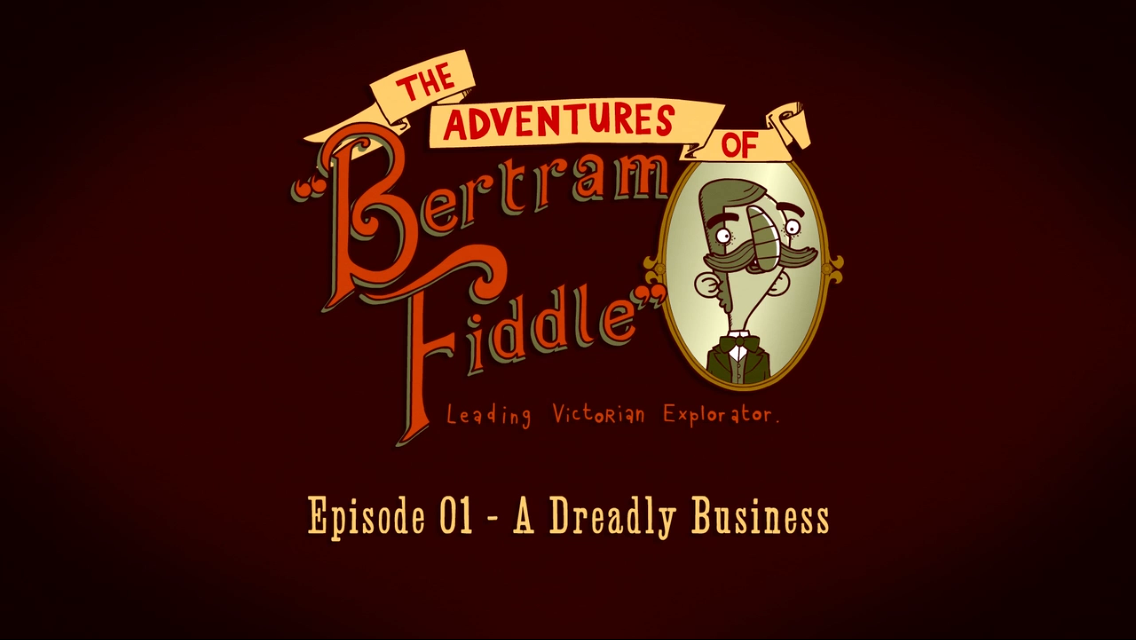 I’ve always been intrigued by murder mysteries of any type in the entertainment medium; whether it’s Law & Order, CSI, or a variety of murder mystery video games, I’ve always enjoyed trying to fill the shoes of someone like Sherlock Holmes and solve a mystery. Point-and-click adventure titles figure prominently in murder mystery types of video games, so I was immediately intrigued by the premise of The Adventures of Bertram Fiddle: Episode 1 — A Dreadly Business, by developer Rumpus and it’s comedic interpretation of solving a murder. The series will be released in two episodes with the first out now on the Nintendo Switch.

A Dreadly Business is a point-and-click adventure title with inventory focused puzzles, much like what you would find in the early 90’s with the Monkey Island series. You will be collecting items and using them throughout the game, as well as talking to other people in order to gain enough clues to solve the mystery. Immediately, I was impressed by the graphics with an overly cartoonish aesthetic, but sometimes with disturbing character designs bordering on abstract. It’s very pleasing to look at and gives A Dreadly Business a unique type of charm and personality.

For most adventure titles, the voice acting needs to be spot-on in order for the game to succeed. Thankfully, with A Dreadly Business, I was almost immediately hooked into the adventure in large part to the characters and the stellar voice work given to them. The story has you play as Bertram Fiddle, an aspiring but slightly naive detective who looks up to Sherlock Holmes. The Watson to Bertram is burly cyclops whom you can also control to get through certain puzzles. Basically, there is a murderer on the loose who is named Geoff the Murderer by the London townsfolk and takes an obvious homage to Jack the Ripper. Bertram takes it on himself to find this killer, but solving the murder is part of a grander entanglement that I’m guessing spans the other episodes.

While following Geoff you will have other mysteries to solve, such as Finding Foofie your significant others dog who is stolen by Geoff early on. During the dog-napping, he accidentally bumps into you and manages to swap your briefcases. When the bag is taken for examination, lo and behold there is a severed head. You are then tasked to find the other pieces of the head in this episode in order to piece together enough forensic evidence to possibly capture the murderer.

Gameplay is fairly linear, with a few scrollable screens and easy point-and-click navigation throughout the environments. The mechanics are easy to get the hang of; pushing the A button performs all functions, hotspots are clearly indicated when hovering the cursor over them, and the inventory is quickly accessed from the left-side of the screen. My only slip-up came when the gameplay abruptly shifted to a side-scrolling chase scene and it took me a few moments to recollect myself and realize I had to use the left analog stick to avoid obstacles. A second chase later on, was much easier once I knew exactly what to do but if you do fail its game over and you have to start from the beginning of the scene again.

I loved A Dreadly Business’s combination of goofy and morbid humor and in fact, I found the goofiness of the title refreshing, even though I usually prefer heavier themed games I can appreciate silly storylines as long as they are well done. It even pays homage to some classic adventure titles like Monkey Island with a character named Guy Hardwood, a call-back to the famous “pirate” Guybrush Threepwood. A Dreadly Business is also extremely heavy on the puns and sexual innuendo when you may have thought the art style didn’t cater to crude humor. For example, there’s an old character in the game named Lady Ravershim who has a secret garden which hasn’t been pruned in awhile, and you need to open a bush to get further…

The puns can become absolutely groan-worthy and there are a plethora of them, so if this isn’t the type of humor you appreciate A Dreadly Business may not be a good choice for you. Also, if you’re looking for a challenging adventure in the genre, this game was more on the easy side and if you were groomed on the classic Sierra styled adventure titles of the past you may be disappointed. A Dreadly Business did not outstay its welcome though, lasting roughly 2-3 hours and comes to a satisfying conclusion.

Overall, The Adventures of Bertram Fiddle: Episode 1 — A Dreadly Business was a well-made adventure title and a fun experience. I was impressed by its clever art style, very silly and smartly written story, and it did a good job of satirizing the murder mystery genre and the Victorian era of London. While there is nothing really to complain about, your enjoyment of A Dreadly Business will come down to if you like to play classic adventure type of titles. If not, this game probably won’t change your mind, but for everyone else, it comes highly recommended.