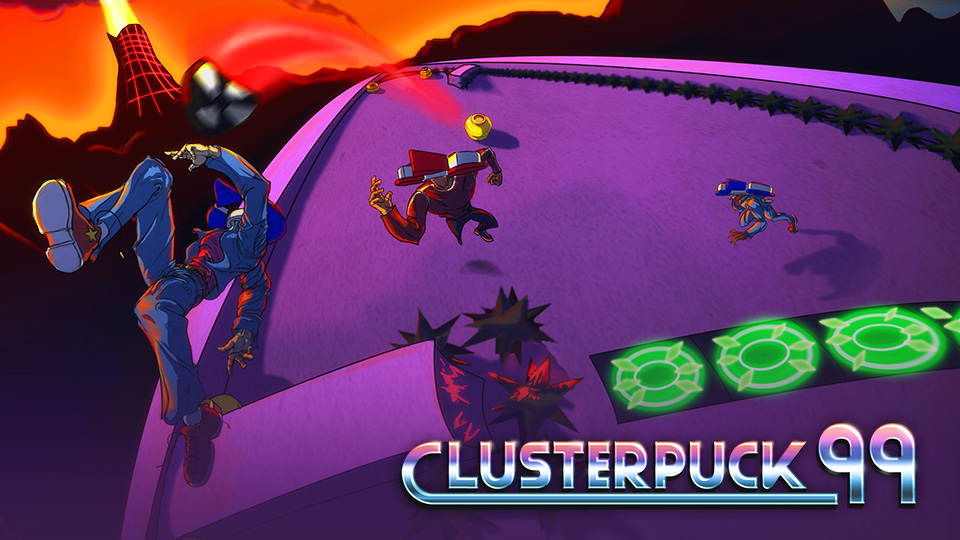 Cluster f*** has become somewhat of a nice play on words with Clustertruck being released earlier this year, and now developer PHL Collective releasing their minimalistic and chaotic title ClusterPuck 99 for the Nintendo Switch. ClusterPuck 99 is two parts hockey, and one part soccer and pinball, with the result being chaotic fun. As great as its premise is, you will need friends to play this crazy title, as it won’t be much fun by yourself.

ClusterPuck 99 looks similar to ice hockey stripped down to the essentials of on puck, two goals and up to eight players. Instead of playing on a hockey rink though, you play on wacky minigolf-like courses that feature mazes, bumpers, boosters, spikes, perils drops, and other hazards, all the while trying to score a goal against your opponent. The controls are simple: you move with the left analog stick, aim with the right stick, and shoot or dash with the A button. I liked how the shooting felt like a twin-stick shooter where you could be moving away from a goal, but fire in the opposite direction.

The gameplay mechanics work very well, rewarding skill but incorporating just enough chance to make the game accessible to new players. The concept and mechanics are basic and intuitive – you have to shoot the puck into the goal – but there’s considerable complexity to be had from using strategy and teamwork. Over 30 of the stages have unique shapes that demand different approaches, and it’s fun to navigate obstacle courses lined with bumpers and spikes that yield a satisfying “thump” whenever you bump an opponent into the walls.

These subtleties give ClusterPuck 99 much of its charm and make it easy to learn but difficult to master. Clusterpuck 99 is at its best when straddling the line of ‘next goal wins,’ and it builds and releases that tension as thrillingly as any other type of title in the genre. Things can get too out-of-control on the last few levels, but most of the levels strike a good balance between skill and chaos. The combination of obstacles, the physics-driven puck, and having other human players result in an exciting unpredictability.

Playing with up to eight other players is great using the joy-cons, but what if you want to play alone? Luckily, you can play against AI bots, which come with easy, medium and hard difficulty settings. Unfortunately, AI can be entirely hit-or-miss, oftentimes getting stuck in the corners of walls or even gliding right past your goal. To get a human-like challenge, you’ll need to put it on the hardest setting, but it’s still no match for having some real-life challengers. It was a great decision by the developer to allow the AI to be mixed in with real players, meaning you can set up large matches with just a few friends.

If you can only play single-player, there’s a fun challenge mode you can take part in. This includes nine mini-games in which the player must demonstrate their skills, including goalkeeping, shooting and maneuvering around obstacles. Depending on your performance, you’ll get a bronze, silver or gold medal, and earning a gold can net you some new skins for your players. These provide a nice distraction from the main game, but don’t take very long to complete and some are easy enough to get gold on the first attempt.

Finally, if you fancy creating your own stages, there is an Arena Creator Mode where you can create your own maps. I didn’t put too much time into this mode as I’m not much of a content creator, however, it did seem easy enough dabbling with some of the user-friendly tools and can provide some much-needed replay value. Navigating the menus is fast and snappy with a nice minimalistic approach, although the aesthetic may be too simple and boring if graphics are your thing.

Overall, ClusterPuck 99 is a fun experience if you have friends wanting to play a simple competitive title. The core gameplay isn’t too exciting and may be too simple, but there is some skill involved for those who put in the time. ClusterPuck 99 is a great game to include in your Switch multiplayer playlist, just don’t expect much if you plan to play only single-player.