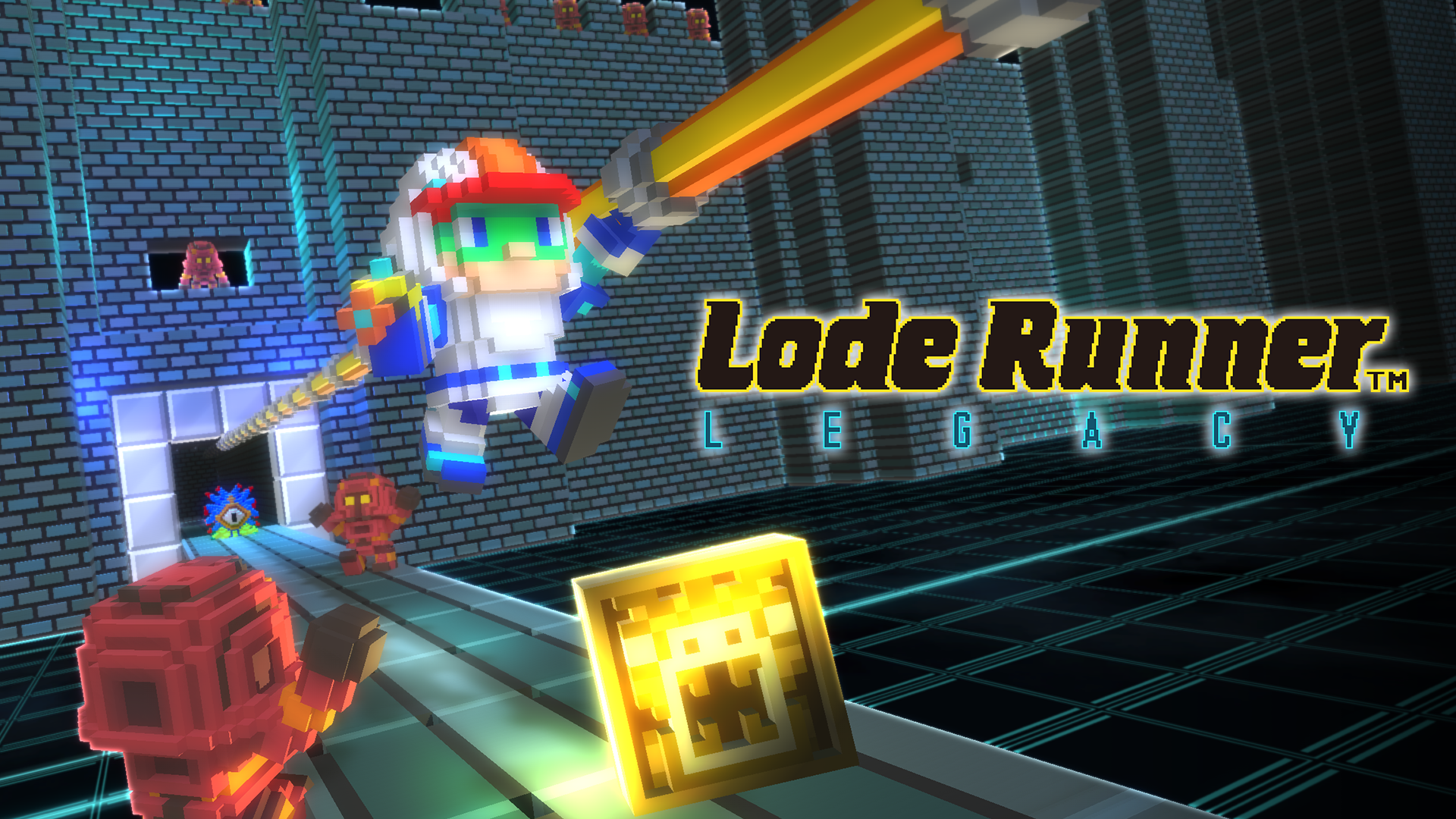 Poor Lode Runner. While other characters of the era like Mario, Bomberman, and even Spelunker have gone on to see plenty of success and recognition in gaming, Lode Runner had his 15 minutes of fame in the ’80s and has been stuck lurking in the shadows ever since – sure, you’ve heard the name before (what is a Lode anyway?), maybe you even tried it once or twice, but it never really grabbed your attention. Yes, our money hungry friend has fallen on some hard times, but developer Tozai Games has taken a cue from Super Mario Maker and brought the little treasure hunter that could into the modern era with a new coat of pixelated paint and a host of online sharing features to finally make this Legacy something worth remembering.

Lode Runner Legacy is a simple game: you’re dropped into a single-screen level filled with gold and enemies. Your job is to collect all the gold and escape through a ladder at the top of the stage while avoiding the baddies, armed only with the ability to dig holes that let you trap foes and fall through floors. Similar to Spelunker, much of the challenge in Lode Runner is a result of its very specific rules. For example, you can’t dig blocks that are horizontal to or directly below you, nor can you dig a block that’s covered by another block. There’s no jumping either, so even a wall just one block high can be extremely detrimental to your progress. The strangest quirk of all is the Runner’s inability to pick up hovering gold by moving into it from the side, instead of requiring that you fall on top of it.   Where Lode Runner differs from Spelunker, however, is in its strictly puzzle-oriented style of play, and once you get a handle on its idiosyncrasies it’s a ton of fun to figure out just how to traverse each stage.

For a game this single-minded, there are a surprising amount of things to do as well. Adventure Mode contains 50 levels of gold-grabbing action, Extra Mode provides another 20 levels to really test your skill once you’ve beaten Adventure Mode, Puzzle Mode offers 50 levels purely focused around traversing the stage with no enemies to worry about, and Classic Mode brings back all 150 levels from the original Apple II Lode Runner, complete with blocky stick figures and a lack of any music. There’s even a two-player mode with its own set of exclusive levels, though Lode Runner‘s difficulty means there is much more skill and cooperation required than most other games with a similar feature. Stick to Snipperclips for your casual co-op fun – only the truly dedicated need apply here.

Perhaps the biggest appeal for Lode Runner fans is the new Craft Mode, where you can design your own levels, characters and items that can be uploaded and shared with other players. The level editor is extremely straightforward and easy to use, which should lead to plenty of longevity for those interested in trying out new stages. The character creator isn’t quite as simple, but if you’ve played games with similar tools like 3D Dot Game Heroes or Resogun, you’ll basically know what to expect. It’s no less clunky than any other 3D voxel editor, but that hasn’t stopped plenty of folks from already uploading plenty of custom avatars, many of which are from other media: there’s Shantae, Sonic, Lupin III, the spies from Spy Vs. Spy, and… Adolf Hitler? I guess I shouldn’t be surprised at this point – give players the ability to create anything and they will create anything. This is certainly one Dream Friend I never thought I’d see Kirby teaming up with.

Unfortunately, a cheeky cameo from the Führer himself isn’t the only issue with Legacy. For a game with such a heavy focus on sharing, the online interface is extraordinarily slow. When browsing through custom characters it can take a good 15 seconds to see the one your cursor is over, and you’ll have to manually do this for every single character you want to look at. The high score tables are particularly awful in this regard – I don’t even know if they work or not, as I left my Switch for a few minutes and came back to discover that it still hadn’t loaded any rankings whatsoever.

There are some questionable gameplay decisions as well. Your character does not have strict tile-based movement despite being in a tile-based game, which gives his movement more fluidity but leads to some irritating situations where you’re just a few pixels off from being able to dig a block. There’s also an optional “first-person” camera option that is so utterly awful and unplayable that I have to imagine it was left in as a gag. Still, these minor issues aren’t enough to sink an otherwise excellent retro revival.

Lode Runner‘s gameplay may not have changed since 1983, but Legacy‘s slick presentation, multitude of modes, and robust set of editors are more than enough to keep this old-timer feeling fresh.