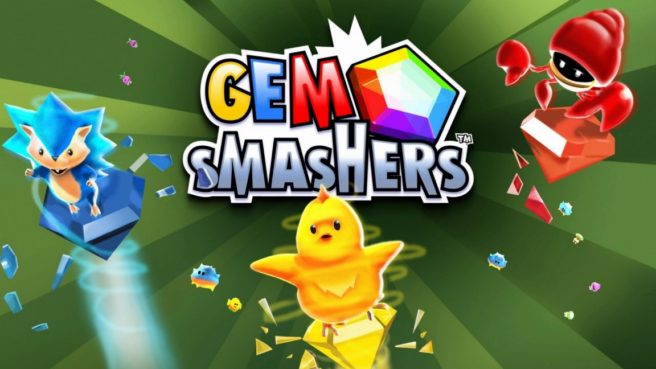 Talk about a blast from the prehistoric past!

Once upon a time 15 years ago, there was a game called Gem Smashers, developed for the Game Boy Advanced, by Frame Studios. It was a puzzle video game that was rather unique at the time, due to being one of the most unique puzzle games for the GBA and the last 15 years have been interesting for Gem Smashers. Instead of going on to be a series fans have fallen in love with, with multiple sequels released, Gem Smashers simply has its graphics improved and released on additional platforms, which includes 3DS, the Nintendo Wii and now, the Nintendo Switch!

By no means are the graphics out of this world and on the same cutesy level we get from Kirby Star Allies, but the toony Gem Smashers has never looked prettier than it looks now. Graphics aside though, it is still the game previous players have been able to enjoy as Bam, Bau and Bom are back. It also means we get to return to the planet Earth when it is devastated by an IMBU scientist, who with an army of henchman, raided the planet of all its energy and imprisoned the planet’s varying lifeforms, in gem stones. This, is of course, where Bam, Bau and Bom come into play.

Not only are they the Heroes, who will rise up as the Gem Smashers and free their trapped friends, but they also vary in their own playstyles and stats in such a way that it almost makes it worth playing through the main campaign more than once, just to play as each one. (Remember, I said almost.) Content-wise, Gem Smashers will easily require at least three hours per playthrough, due to consisting of more than 100 levels that are played out across 8 worlds, with their own unique background theme.

As for the controls and what it is you must do on each level, Gem Smashers plays out like a breakout game, in the sense you have to move round and destroy every gem you see, as if they were bricks, except the free reign you have, comes at a price. Although you can use the left analog stick to steer your character of choice, left and right and break the breakable blocks to reveal the gems/chest/traps that lurk underneath, gems can only be smashed if you match their colour. Meaning, if you’re blue and the gem is red, you’re going to have to hit a red colour changer to become red and then smash the gem. But, in the event that you die, due to a boss taking you out for the count, or you hit the death block, you will respawn at your default colour.

Sadly, dying isn’t the hassle it could have been as players actually have infinite lives, so there are no game overs to be had, which ultimately makes Gem Smashers an easy to play game, thanks to being no real challenge to it. Heck, even the Death Skull which will haunt you, when you’ve spent too long trying to clear a level, is no real threat as you can still clear any level, whilst you attempt to avoid it. As for those bosses I mentioned, they’re not your typical battle as it’s more a case of being the right colour and hitting a weak spot, every time an opportunity presents itself, so again, there’s no real challenge here either, even if you do have to hit the spot multiple times.

Something that Gem Smashers does try to do, to make up for the lack of a challenge, is using a Star system. Scoring points is one thing, but trying to avoid dying and going for an impressive combo is something else, but even with a poorly balanced item power-up system at play, almost every player can get all 4 stars per level, if they apply just a little bit of time and focus. That failure aside, where Gem Smashers does actually succeed, is in its battle mode. Provided you have unlocked every world in the main campaign, you can use each world as a battleground for you and a friend to engage in some single Joy-Con head-to-head multiplayer, where the aim of the game is to be the first to colour match with as many gems as possible. It’s not necessarily the most exciting thing in the world, but it is the single-most challenging aspect to Gem Smashers and only redeeming factor.

While I hate to say anything bad about games, as I do hate to put people off something they could potentially enjoy, but Gem Smashers is nothing special. Sure, it’s a slightly different puzzle game than what we’re used to, but even with better-looking graphics, Gem Smashers is showing its age and is just too easy to play that it doesn’t even feel like you’re playing a game unless playing Battle Mode. So, if you must pick up a puzzle game this month, you might want to consider getting something else instead.