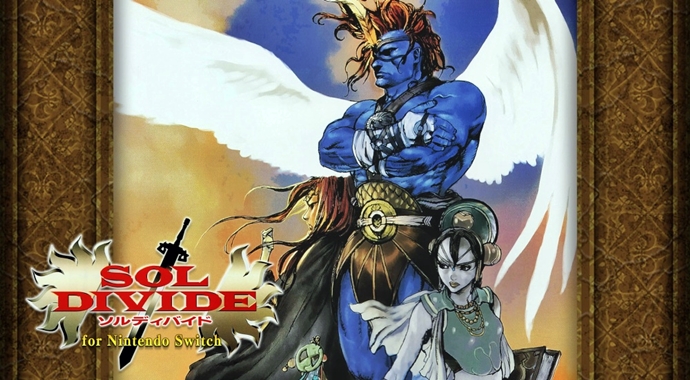 The Switch is quickly becoming an excellent home for fans of the shoot-’em-up genre, otherwise known as “shmups”. From retro classics like Gunbird and Zero Gunner 2 to slightly more modern takes like Graceful Explosion Machine and RXN -Raijin-, there’s something for everyone… well, almost everyone. For the shmup fan that’s always wished they could play a game that’s a little more Golden Axe than Axelay, look no further than 1997’s Psikyo shooter Sol Divide.

In Sol Divide, you have three characters to choose from, all of whom focus on one particular specialty. Vorg is the heavy hitter who does big damage with his sword-based melee attacks, Tyora is a wizard that specializes in powerful projectiles, and Kashon is the all-rounder that strikes a balance between the two. And yes, I did say “melee attacks” – the first thing you’ll notice about Sol Divide is that calling it a shmup is a bit of a misnomer, as much of the gameplay involves close combat not unlike a beat ‘em up. While you can shoot enemies from afar, getting up close and personal is encouraged, as melee attacks can stun enemies and refill your magic meter. This meter can only be used to fire off a basic fire spell at first, but killing enemies will reveal power-ups that unlock additional spells like thunder, ice, and even the power to stop time. You can switch between these spells at any time once you’ve grabbed them, so choosing which spell you want to use and conserving your magic meter adds a fair bit of strategy to the proceedings. There’s also a surprising amount of story to be found interspersed between the levels through short bits of dialogue. It’s all a bit dense and I couldn’t really follow it, but it’s there for those who are really into lore.

This would all be fantastic if there was a nice meaty game in which to use all these abilities on offer, but alas – Sol Divide’s biggest issue is how short everything is. Shmups aren’t known for their length, but brevity is taken to an extreme here when compared to similar games of the era. You’ll maybe spend 30 seconds to a minute in any one stage before being whisked off to an equally short boss battle. The entire game can be beaten in under half an hour without much trouble, and that’s including the “Special Round” where you replay the entire game again with a slightly higher difficulty. Since this release is a port of the arcade version, it doesn’t even include the roguelike Original Mode included in the home console ports. Value is subjective, and there is some replayability to be found in trying the three different characters, but $8 is a bit of a hard sell for such a meager amount of content… especially when there’s not much to love about the game’s presentation.

Unlike the gameplay, Sol Divide’s visuals don’t hold up quite as well as they did back in ’97. The graphics are presented in the pre-rendered style of games like Donkey Kong Country and Sonic 3D Blast, but the dingy brown and grey palette used in nearly every stage makes Gears of War look bright and colorful in comparison. The soundtrack is also comprised of extremely generic sword and sorcery fare – I hope you like blaring brass, booming drums, and crashing cymbals, because that’s about all you’re going to hear for 30 minutes (though I must admit that the epic tune used for the character select and victory fanfares is quite catchy).

If you’re really into old-school arcade shmups and want to try something a little different, Sol Divide’s unique blend of genres is worth a look. For the more casual shmup fan, there are plenty of superior options on the Switch to check out that will give you far more bang for your buck.