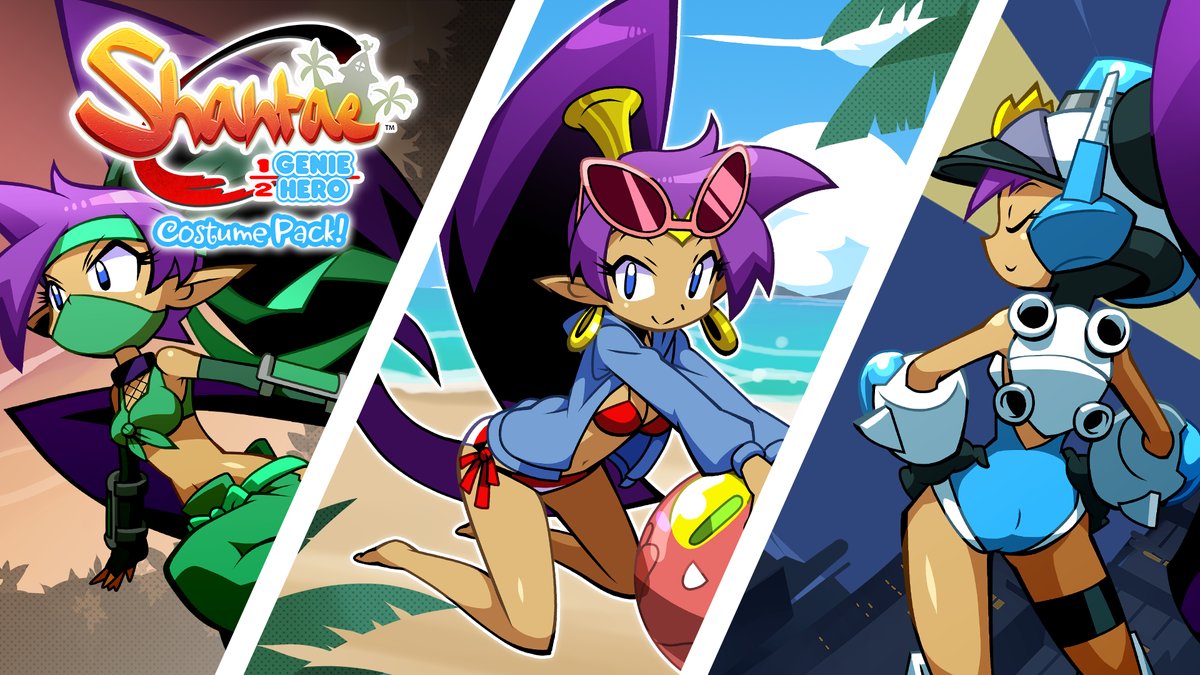 When it comes to the Shante series, Shantae: Half-Genie Hero, is the biggest adventure to date, thanks to a very successful Kickstarter campaign and lots of DLC. It’s been a heck of a time, watching this game grow and grow, but the time for WayForward to bring the game’s never ending content is nearly upon us, as the final DLC is nearing completion.

Below we have rounded up everything WayForward had to say about the Costume Pack DLC, which will go out as a free gift to backers, but will also be available as part of paid DLC to all platforms the game is currently available on. It will also come with all backer exclusives with upcoming, Ultimate Edition physical release of Shantae Half-Genie Hero for Nintendo Switch, which is out April 27:

Welcome friends! Today we’re diving into the Costume Pack DLC! This is the FINAL Stretch Goal for Shantae: Half-Genie Hero, and it will be Ret-2-Go in just a few weeks!

Shantae decides to become a Ninja Master – but first she must undergo intense training! Speed, Stealth, Self-control! She must learn the way of the ninja to defeat her greatest foe.

As a ninja, Shantae moves at super speed. This time out she can’t transform, but she can wall jump, teleport, and throw kunai & throwing stars at enemies. Collect Gems to power up your moves, and search out new Dream Squid locations in hopes of finding them all. Do that, and you’ll unlock exciting Ninja themed win screen images.

Shantae finally takes a day off, and her heart is set on finding the “Very Best Beach” in all of Sequin Land! However, rival sunbathers, competitive shell collectors, and other “shallow” minded foes get between Shantae and her fun day in the sun.

In this mode, you’ll play as Shantae in her swimsuit! She attacks with her ponytail as per usual, but also use a bouncing Beach Ball Attack to hit distant targets. Dancing is replaced by a bubble move, which allows Shantae to float through the air! Just don’t let her bubble pop – or she’ll plummet to the ground! In water, Beach Shantae moves at high speed. So far, so good! What’s the catch? Is there a catch?

Yes, here’s the catch – the sun, it burns! Shantae’s delicate skin is not used to all this exposure to the elements (please humor us on this one)! Over time, she’ll begin to heat up and eventually will begin to take Burn Damage. To combat this problem, players will be able to cool her off by collecting sunscreen placed around the levels, or by taking a quick dip! Help Shantae beat the heat and unlock the best win screens!

(Safety Tip: Swimming doesn’t actually protect a person from sunburn. In some cases, it can make it worse. Beware, and be aware).

As an officer of the law, Shantae is tasked with re-capturing the escaped Space Hooligans and clearing each stage!

In her Officer Costume, Shantae can use the Siren Helmet to “Switch Up” solid blocks scattered about each stage. Controlling the position of these blocks will allow her to solve puzzles and navigate around. Just don’t let her get smashed into the screen! Shantae also gets an upgradable Pellet Gun in place of her usual ponytail attack, useful for blasting monsters to shreds.

Unlike the “Mighty Switch Force” games, Shantae won’t have to collect every Hooligan to clear a stage. However, collecting them all and getting the best times will unlock special win screens, so try your best!

We’ll be back in a couple of weeks to discuss code distribution! As always, our goal is is to deliver the Costume Pack DLC to Backers well before it goes public. Codes have been requested, and you can expect us to turn the town upside down in order to make that happen. By now you know that it doesn’t always go to plan, but please know that we do everything in our power to serve Backers first!

As soon as details regards to pricing for the DLC, we’ll be sure to share the good news, so until then, why not play some Shantae and the Pirate’s Curse? It’s out now on Switch and it’s fantastic!