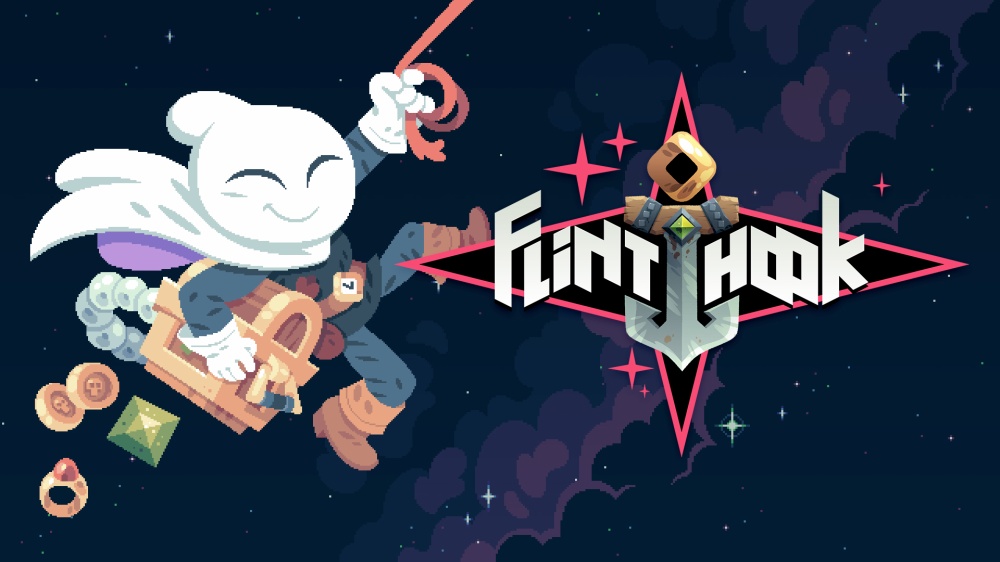 Grapple your way through enemies and obstacles in this thrilling adventure against space pirates!

With the plethora of quality rogue-like indie titles being released every week for the Nintendo Switch, it’s almost mandatory to have something, whether in the gameplay or art aesthetic, that stands out. Fortunately, from developer Tribute Games, Flinthook is one such game that while not being wholly unique, is a joy to play and experience. Now, with the recent release on Nintendo Switch, now is the perfect time to play this charming adventure in the cosmos.

Flinthook has you play as a mischievous treasure hunter named ‘Flinthook’ and you are tasked with stealing treasure from other space pirates across the galaxy. We don’t know much about the backstory, other than your goal is to steal as much loot from other space pirates and take down some enemies along the way. It’s a minimal and straightforward story that doesn’t get too convoluted or distracting. On your journey, you are tasked with taking down four main bounties that act as boss encounters. It’s not as straightforward as clicking on the boss and immediately trying to take down their ship though. You’ll have to go through a certain set amount of spaceship bounties before reaching the boss for that section.

When you first start playing you’ll see a series of spaceships that you can invade. Upon selecting a ship you’ll be able to select perks that will help you on your missions. These can range from being an XP booster that can help you level up faster or a health bonus that increases your overall health before going into the level. As you level up during missions with the XP you collect you’ll increase the amount of perks you can equip before a level. Upgrading your overall health seems to be the most noticeable gameplay advantage, due to allowing you to take more damage and this is important because Flinthook is a very challenging title.

With your perks selected, Flinthook rides an anchor into the space pirate ship that you selected to invade and this is where the rogue-like elements come into play. There’s a preset series of rooms that get randomized as you go through the spaceship and in that sense, Flinthook has some rogue-like elements from the procedural level layouts. Rooms are a mystery to the player before entering them and you can see the general layout of the ship at the top right of the screen.

Flinthook is able to use a hookshot that attaches to rings scattered about the ship. It’s a multi-purpose tool that you’ll use to open doors and dynamically maneuver throughout rooms, also being able to remover some enemies shields. You can also use a blaster that you can fire to attack enemies with. A neat feature is the ability to slow down time with a press of the ZL button. This gives you a little leeway when maneuvering around enemies and obstacles and of these tools come together to provide some chaotic fun. Usually attacking the enemies consist of using a hookshot to propel into the air, using the slowdown to dodge incoming enemy fire, and then using your blaster to blast the enemy.

The controls take some time to get the hang of, with the aiming of the hookshot and blaster done by using the left analog stick which also controls your movement. It doesn’t feel right at first, but once I played a few missions I was able to adapt. Flinthook is definitely a tough game that places enemies and hazards in areas to provide difficult combinations to overcome. You’ll find that many of these rooms are filled with enemies in combination with the rest of the hazards in the room to provide a fairly difficult challenge.

Not all the rooms are just enemies and traps though. You’ll come across some back market traders onboard that you can use the gold coins you collected to buy health items or other perks. Other rooms include mini-bosses that stand out from the smaller enemies, but are minuscule when compared to the four main boss fights. These four main boss fights feel unique to one another and are definitely the big pivotal moments of the title. They are wonderfully designed and are broken into multiple phases to conquer, each one becoming harder than the previous.

Flinthook uses a retro pixel-based art style that’s gorgeous to behold and stands out with fluid animations and an original concept. The backgrounds are exquisitely detailed and do a good job of appearing to give the rooms more depth. Other nice details include sand being swept up by the wind and lanterns flickering with gusts of air, and this all gives life to the title. Whether playing handheld or docked, Flinthook scales well and looks great playing either way. The soundtrack is also well done with catchy chip-tune beats and shines throughout the gameplay. Even if you don’t end up playing Flinthook, it’s worth looking up the soundtrack if you are a chip-tunes enthusiast.

Overall, Flinthook is a solid retro-inspired platformer that is difficult to master but fun to play. It can be completed in one sitting, but most players will enjoy the rogue-like elements to repeatedly play the procedurally generated levels over and over again. Visually and in audio design, Flinthook is a joy to behold and melds exceptionally well with the gameplay. Even with the limited amount of content that hedges on how many times you decide to collect bounties, Flinthook sits among the best of the challenging platformers genre, including Celeste and Super Meat Boy.

Did you enjoy our Flinthook Switch Review? If you would like to read more of our Nintendo Switch Reviews, feel free to check them out here.