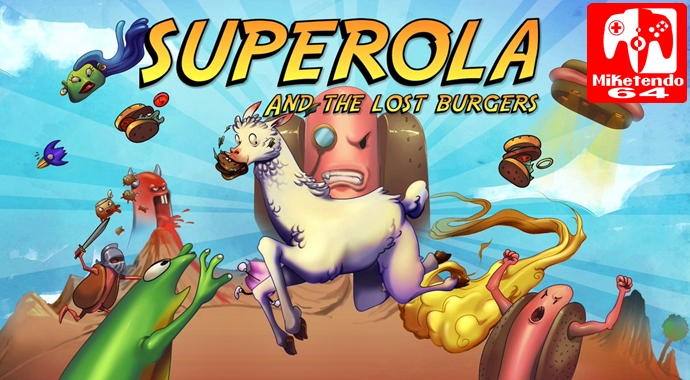 When a Princess has been kidnapped, call a plumber, but when hotdog aliens invade, call a Llama.

If you have ever harboured the desire to play a truly “out there” game that takes a good look at the world around us an takes iconic tunes, characters and characteristics and turns them into memes, then clearly Superola and the Lost Burgers is a game that is right up your alley! Developed by the Barcelona based Undercoders, Superola and the Lost Burgers is weird little platformer that graced the Nintendo Switch eShop this month and while some would like to openly shame it, labelling it as crude and a game that has nothing to offer, I’m actually inclined to think some of the hate is unnecessary.

Just because Superola and the Lost Burgers, is a game all about a world where hotdogs have invaded and kidnapped all the burgers and only a Llama can stop them, so what if it’s goofy and the story is not the “original” narration it should have been? After decades of games and centuries of books, there are no original stories any more, but it doesn’t mean we can’t enjoy the way they are presented, even if the presentation is goofy as hell.

Gameplay-wise, Superola and the Lost Burgers is simple retro arcade, auto runner platformer, with a story mode that has more than 70 stages and only has three buttons for you to memorise, A to jump, B to fire a devastating beam that will obliterate objects, structures and enemies and then there is X for Inventory. While Superola is the super llama that can fire a laser from his month, he is still a llama that can be put down, just from a single hit, so for the levels that stomp you, there are items that can be used to make your adventure a little bit easier, thanks to things like a double jump, a longer beam and an additional hamburger got when the going gets really tough. (Items from your inventory can only be used at the beginning of the level.)

As for how to get the helpful items, one can be earned at the end of each stage you beat. But should you have the skill to dodge the enemies each level has to offer, and not use every burger the levels have to offer, which just so happen to the power-up that acts as a fuel source so Superola can fire his deadly beams, then those left over burgers will be converted to coins that can be used at various shops to buy all manner of items, including certain literature based items that can open up levels previously unavailable to you.

Still, what kind of a platformer game would Superola and the Lost Burgers be, if it didn’t have some more substance to it to fill out its main campaign? In light of this, there are also 12 Special Burgers that can only be obtained by getting a “Perfect” score from a rhythm game that happens at the end of certain levels, much like the Big Bang Theory Rock, Paper, Scissors battles that can also happen at the end of specific levels, whenever you’re locked in what has been described by the developers as being “memorable boss battles.” Even then though, the weirdness continues in many other forms as a certain underwater level, will have you come face to face with a certain blue loving Leonado that just so happens to be a turtle and a ninja. There are Zelda references, told to you by a smiling pooch that will give a skateboarding, Mushroom Kingdom themed stages and even Goku’s Flying Nimbus shows up as well! (When in Rome I guess.)

Should none of the gimmicky weirdness do anything for you, with the simple and seemingly outdated graphics and associated chiptune soundtrack coming across as all the reason you need to walk away from Superola and the Lost Burgers and never look back, then it’s time to bring out the secret weapons! In addition to the game’s story mode, it has two other modes, one being endless that will allow you to select the specific level you want to play and force you to get as high a score as you can before you die, whereas the other is a good old fashioned versus mode that allows you to share the goofyness. Yes, that’s right, why hog Superola and the Lost Burgers by keeping it as a game just for you, when you can share it with a friend and see who can keep their llama alive longer.

I’ll admit, the versus mode is rather bare bones and doesn’t offer the bed representation of the game as you don’t get the chance to experience the full hilarity that Superola and the Lost Burgers has to offer, but if your friend plays Superola with you and remains in your life afterwards, then it means you have a lasting friendship on your hands, which is more than what can be said for Superola and the Lost Burgers, because it is not a game that will leave you with a lasting impression, for the scars will heal, in time and you will not be laughing long enough to wrinkles!

By no means is Superola and the Lost Burgers the epic game Undercoders marketed it to be, as the boss battles are merely Rock, Paper, Scissors, Lizard, Spock battles, but there is challenging gameplay present, there is a versus mode and it is not the worst runner game to exist, as there are others that deserve the title.  So, it’s not the abysmal title many would have you believe, but given the number of more fantastic and better put together platformers that are available on Switch already, Superola and the Lost Burgers is a game you can do without having in your life.