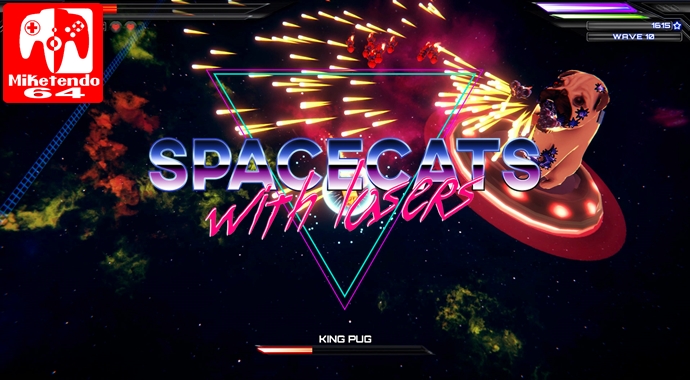 Your galactic journey of battling aliens aboard a flying slice of cheese, begins here:

To think, it was just last week that I thought cats steering submarines was a bizarre concept, but having brought my time with Aqua Kitty UDX to an end, I immediately jumped into Spacecats with Lasers and my god, it got worse! Not worse in the sense that it’s a flat-out abysmal game, as there is some appeal to it, but the cat craze in games, is getting very cat-astrophic as the ideas behind them are even crazier.

Instead of taking a leaf out of Aqua Kitty UDX’s book and being another side-scrolling arcade game that has you play as a cat, defending miners that are attempting to mine milk from the sea floor, Spacecats with Lasers is a game that most certainly lives up to its name. It is a wave shooter set in space that puts you in control of a cat who has been caught by Spacerats and is now forced to do battle in an arena.

Naturally, there is a su-purr-ior villain that the Spacerats report to, by the name of King Pug, which just so happens to be a gigantic pug that flies around on a flying saucer and fires laser beams out of his mouth and if you’re an experienced gamer of games that are part of the shooter and bullet hell scene, you might just see a lot of him as King Pug is something of Spacecats with Lasers’ true enemy that can be encountered in the game’s only playable mode. (Yeah, I probably should have mentioned that sooner.)

Being the single player focused, twin-stick shooter title that it is, Spacecats with Lasers only has support for one player and one mode that goes by the name of Play! Whether you choose to duke it out on Easy, Normal or Hard, the goal and gameplay is the same, as you are only asked to do three things, shoot, survive and thrive. With just three lives, a left analog stick for steering and a right analog stick used for aiming, you must battle waves of Spacerats of varying difficultly, in your efforts to reach King Pug, who awaits you on Wave 10. Should you die, you will be forced to endure all the previous ways once again, to reach your adorable foe, but should you win and blast him to absolute smithereens, then I hope you’re sitting comfortably as there is no end for you.

Victory over King Pug will simply see you having to endure more waves, more enemies and more battles against King Pug, as there is no end to Play, there is just doing what you can to secure as high a score as you can, before losing your final life and handing the controller over to someone else who wants to play, if there is a someone else present. In the event there isn’t one and it’s just you, it means you can dive right back into battle that comes with a soundtrack full of cat noises and some bland graphics that don’t do Spacecats with Lasers any real favours.

The good news though, is the shield, life, ammo and reload bars that occupy the top of the screen with life and shield to the left of the screen and ammo and reload bars to the right, are clear as day, so you can always get a good look at them at any time and be fully aware of when you should be pressing R to reload (ZR to shoot,) and ZL to dash and have temporary invincibility, all because your life is looking a little low and you’re on your last life of 3. But to really give yourself an edge, there are temporary power-ups that can be obtained within the waves, and permanent ones that you can pick between at the end of each and every wave, so if you feel more speed is more important than more life, then that’s what you choose, but always pick wisely.

As a game that comes packed with some Spacerats that can really deal some damage thanks to their laser blasts, it’s imperative you pick the power-ups that speak to your specific play style. After all, it’s no good choosing the improved fire rate power-up when there is a dash upgrade that will allow you to dash more often, because the right choices really do make the difference between you playing for 5 minutes, or for 50. No matter how good you are though, there is always one certainty, you will die and when you do, it’s time to cash in.

Every time you die, you will earn credits that reflect the Wave number you were able to reach. Credits, which by the way, can be used to customise your cat’s appearance, by giving him some hair, a hat, changing his colouring or even changing his craft, to have him fly around space on crafts in the form of a keyboard, a fried egg and even a cardboard box. But unless you are going to make it your goal to get every customisation, which will require you to keep on playing until you have all the credits you need, or are just looking to improve upon your skills, that that’s pretty much it as far as Spacecats with Lasers is concerned, which is something of a shame, as Spacecats with Lasers could have been something more.

Whilst it is true Spacecats with Lasers has a laughable title and can be fun, if your definition of fun is a weird game about space cats and rats, Spacecats with Lasers could have done with being a bit more like Rocket Fist (also by Bitten Toast Games.) Rocket Fist was also a small game, but it had a multiplayer mode that redeemed it and made it worth checking out and this is something Spacecats with Lasers sorely needed, because without it, it’s a bizarre yet generic wave shooter that offers very little in both the long and the short run and is not something I would recommend to anyone, when there are plenty of over titles, including Rocket Fist that are far deserving of your time, money and attention. I hate to say it, but Spacecats with Lasers is really not worth your time of day.