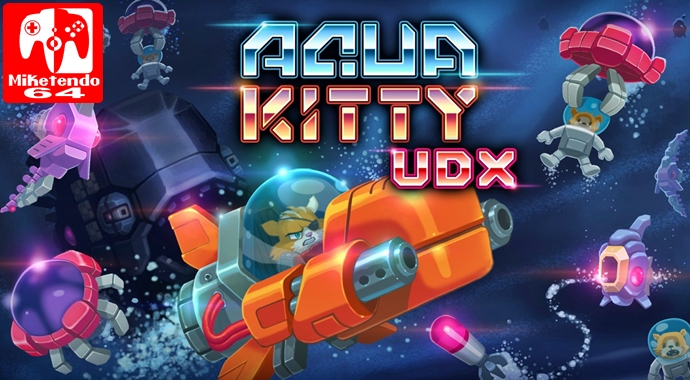 When it comes to milk, there’s nothing these Cravendale kitties won’t do to get it!

Have you ever wanted to play a game that throws all sense of sanity and reality out of the window? There’s loads of games that fit the bill and are out on Nintendo Switch already, with Bayonetta and Bayonetta 2 being the most recent examples, but they’re not the only games that released last week, because so did Aqua Kitty UDX and it is even more bonkers.

As the most definitive version of Aqua Kitty UDX, Aqua Kitty UDX is a side-scrolling shooter that truly does away with any kind of a sensible plot as it is all about cats, their submarines and their mission to mine milk from the sea floor, all because milk has dried up on land (I’m guessing no one told them that it comes from cows.) But, unfortunately, the sea floor is not a safe place, because while the feline miners don’t have to deal with currents, the bends or even vertigo, what they do have are some Splatoon 2 Salmon Run rejects, in the form of mechanised marine life that will either shoot you, destroy their little mining facilitates, or just come along, grab them and fly off into space with them. (I did say Aqua Kitty UDX is weird right?)

Out of 3 modes Aqua Kitty UDX has to offer, it’s only in 2 of them that you’ll have to experience this weirdness, as the third and quite frankly, the best mode Aqua Kitty UDX possesses, is Dreadnought, but we’ll get to that in time. For now, let’s start with Classic and Arcade mode. The 2 are pretty the same thing, as they feature the same amount of levels and exactly the same style of gameplay, but they are separated by two aspects with one being lives.

In Classic mode, which has both an Easy and Normal difficulty setting, with even Easy mode being able to give you some form of a challenge, especially in the later levels, you play as a cat, in control of a submarine, tasked with battling waves of marine life. Most are solely interested in killing you, but as stated before, there are some creatures that just want to run off with the miners that are represented by white dots on the screen. You don’t need to have all of them present on the screen, by the time you finish the last wave and pick off the last enemy, as one will suffice, but the more miners you’re able to keep safe, the more points you’ll be able to acquire when the level ends, which can then be uploaded to the online leaderboards, if you’re online. So, whenever you see one of them in trouble, by rushing over and taking down the Jellyfish-like creature that is in the middle of cat-napping one of your workers, as long as you kill it before it’s flown away completely, the miner will return from whence they came and return to duty.

The only time you’re required to do a little bit more than that in Classic mode though, is on the levels where you must also defeat a mechanised boss, first by removing their defences and then depleting their life bar. Sadly, shooting the bosses will not be enough as the infinite, yet slower fire power you can use by holding A, only does so much and your Turbo Fire (B,) although it is more powerful, once its associated bar is empty, you’ll need to let it recharge before using it again. Additionally, whilst the screen will continue if you pass a miner and keep heading right, not only will you pass them again, but unless you use R or L to change the direction you’re facing, upon heading left, when facing right, you will be travelling at a slower pace, in contrast to the accelerated speed experienced when heading forwards.

Mastering your turns and knowing when to act, is not necessary in the earlier levels of Easy mode for classic, but they are a necessity for Arcade mode, because unlike Classic mode, which is the main campaign that can be played with a friend or by yourself, Arcade mode is much like a roguelike. You, or you and your friend only get one chance at each run, so if you lose all your miners or hearts in a single level, its game over and you need to start all over again. The only good news with Arcade though, is that enemies now drop a Green Zelda Rupee looking form of currency, which can be traded in for upgrades such as rear fire, vertical fire and even diagonal fire.

Coincidentally, those forms of fire can also be used in both Dreadnaught mode and Classic, provided you destroy the colour changing enemies that drop the items that will temporarily empower you, or just turn out to be a bomb that will clear the screen, as it bombards your enemies. Should Arcade mode on Normal difficulty not be gruelling enough for you though, there is always Infinite Espresso, which is essentially an Endless mode. The best mode however, is of course, Dreadnought. With Dreadnought, although there miners you can save on each of the levels, your task in the Meowiana Trench is to take down the gigantic, yet submerged Dreadnoughts, first by destroying their defences and then by destroying their core.

Personally speaking, Dreadnought is the best mode Aqua Kitty UDX possesses, as it feels more action packed and on the whole, feels like it represents Aqua Kitty UDX better, especially since visually the sprite work is not all that when Aqua Kitty UDX is played in handheld mode, as everything looks way too small, but is a mode that is Aqua Kitty UDX at its finest. It’s the mode that will take you the longest to complete, due to its increasing difficulty, but even then, it’s something that can be done within an hour or two depending on your skill level and is the only actually feature that offers any real replay value, as even with Cat-chievements present, they feel more like there just there for show. Obviously they’re not, as they can be fun to get, but much like Aqua Kitty UDX on the whole, the Cat-chievements sound good in theory, but more could have been done to make it an easier sale.

Despite being a game that in my book, would be an immediate write off as there Aqua Kitty UDX, really strikes me as the kind of game that I’d usually try to avoid, it’s also a game that for some,  has the potential to be their next guilty pleasure. A game that could be booted up at any time, provided they have a spare 10 minutes. I still stand by the fact though that the sprites should have been bigger to have made handheld mode more attractive, because playing with a friend in handheld, is a mess that does the game no good whatsoever as it leads to plenty of frustration and dying. But hey, the soundtrack isn’t that bad, so there is a silver lining in that at least.