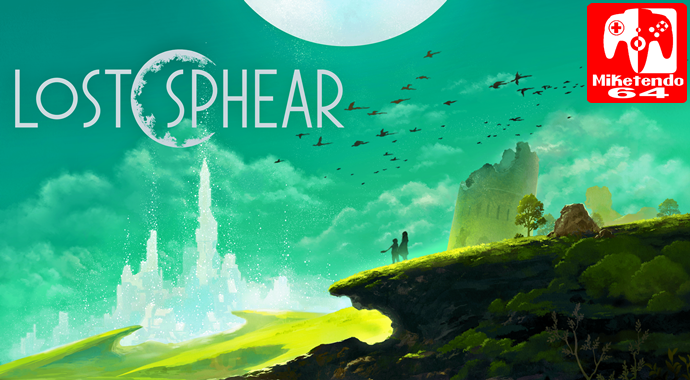 Memories are powerful – they allow you to recall details from the past and actively shape your future. In the role-playing game Lost Sphear, Square Enix and Tokyo RPG Factory present a supernatural take on the influence of memories. Using a game design heavily inspired by the 1995 classic Chrono Trigger, Lost Sphear evokes nostalgia for the golden age of Super Nintendo RPGs, but it also introduces mechanics that build upon those fondly remembered games. Most importantly, it improves upon issues that were present in the developer’s previous title, I Am Setsuna.

Lost Sphear’s tale follows Kanata, a young swordsman whose village mysteriously disappears into a white void. He soon discovers that he has the ability to restore the lost village using recollections of it. Upon realizing that the entire world is in danger of becoming lost, Kanata and his friends set out to restore voided areas with memories and uncover the truth. While an intriguing journey in tone, the story’s pacing is slow, occasionally droning into dull territory. Much of the first half goes through the motions, leading you from one memory-themed subplot to another, which blend together after a while. It’s only in the second half when the story picks up for a satisfying endgame, as long as you’re willing to sit through the middling road to get there. At least the main party members are fleshed out with likable personalities, albeit static. And unlike I Am Setsuna’s melancholy tone, this game adopts a more adventurous atmosphere, which helps the somber moments stand out.

You primarily interact with the world by using memories, which take the form of tangible constructs that you find from enemies and treasure spots. You can also collect them during conversations, which provides a more humanistic feel. Memories are used to restore anything from lost treasure chests to entire towns. Gathering and using memories adds some life to the otherwise tiresome labyrinthine dungeons. The best use of the memory mechanic is through artifacts; by placing one on the world map, you not only restore the region, but also activate conditional buffs that apply during battle – like bonuses for evading an attack. Speaking of which, the enemy encounters are the game’s highlights. There are no random battles; you simply approach the enemy to start a fight, then and there.

The battle system shares similarities with Chrono Trigger and Final Fantasy, most notably Active Time Battle (ATB), in which characters wait to build up a meter before they can attack. Additionally, positioning matters since some attacks have an area of effect, targeting multiple enemies at once. Lost Sphear evolves from its predecessors by letting you move your characters. It sounds like a small change, but it drastically improves battle efficiency and enjoyment. It lends itself to strategies like separating your characters or creating distance with long-range moves. Positioning a character in just the right spot to unleash a multikill is an amazing feeling. This formation-based gameplay is what kept me invested more than anything else. It’s not quite real-time like in the Xenoblade Chronicles or Tales of… series, but it’s a great change of pace from the usual ATB system.

There are other niceties in battle, but they feel superficial, as if they were taken from other RPGs just to fulfill some game mechanics quota. For example, you can press a button during an attack to increase damage, like in Super Mario RPG. But the game doesn’t actually time you, so you could theoretically spam the button the entire time, which is hardly intuitive. Spritnites, the game’s term for spells and abilities, return. Just like in I Am Setsuna, you can add bonus effects to your Spritnite that may permanently become passive abilities. However, this randomly occurs on an infrequent basis, so it mostly feels like an afterthought.

But the ultimate monkey’s paw are the Vulcosuits, large mech robots that you can pilot. The robots are equipped with much stronger powers, including the beloved dual-tech X-Strike, but they come at a steep cost. Every action takes a bite of your limited Vulcosuit Points. It doesn’t take long to run out, and once you do, your robots become useless. I like the concept, but it feels so limiting that you rarely get to enjoy it. Each of these systems are decent ideas, but feel overly convoluted and yet half-baked when mish-mashed here. It could have done away with most of these elements, and I still would have been impressed that I can move around in battle.

The game takes about 30-40 hours, depending on how many of the multiple sidequests you complete. The endgame and postgame are fairly meaty and may entice invested players, though I was satiated by the main game and sidequests. There are three difficulty levels, with hard mode significantly raising the tension. The normal difficulty was sufficiently tough for me, though, due to some infuriating bosses.

Visually, Lost Sphear addresses the white elephant from its spiritual predecessor by featuring a world that isn’t completely covered in snow. The lands have a warmer color scheme, and each area varies in design, which helps keep the journey fresh. Unfortunately, most landscapes and 3D models look bland. Although the game is going for a retro look, the visuals lack that artistic flair and attention to detail that showered the 16-bit greats. That being said, there are some memorable areas that alter the camera perspective or showcase impressive effects, such as a vast lake that mirrors the sky. The soundtrack, with its stunning piano and string compositions, provides beauty and substance, making the whole presentation greater than the sum of its parts.

In the end, Lost Sphear functions like a memory in itself. It’s a recollection of ideas and mechanics borrowed from other RPGs. Its traditional design and structure is specifically meant to remind you of golden oldies like Chrono Trigger. But with memories, it’s hard to truly separate one’s strong emotions from previous experiences. In Lost Sphear’s case, it struggles to form its own identity, leaving it more open to comparison to the classics. At the very least, I shall remember Lost Sphear more fondly than I Am Setsuna, but only time can tell if its legacy lives on in memories.