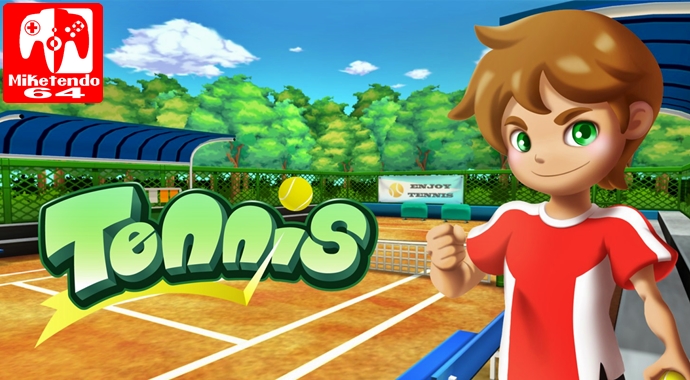 With Mario Tennis Aces just around the corner, the Tennis bug is in the air and we can all feel it. Tennis for Nintendo Switch came at just the right time to tide us over for the big Nintendo game, and really…it is just enough to get those Tennis juices flowing.

At first glance, Tennis is an adorable little game that you can take with you wherever you go, sit back and enjoy some casual sports game-play. With 5 ways to play, there is plenty of variety to the game to keep you playing.

Withing each play mode there are 6 courts to choose from. This is much more than I would expect for an $8 game, so I was quite pleased with all the different play options.

To play Tennis, you have eight different characters to choose from, each with their own strengths and weaknesses, so choose wisely.

Starting off, I would suggest using Chris or Yuan to get used to the game play, and then test out all the other characters from there. I found myself mostly playing with Yuan and Wendy.

At the beginning of each game, you are the server. Tap A and then A again to start your serve. You don’t really have to move your character as you will automatically move to where you need to go…which really I felt this took away from the game. It made it almost too easy. However, to make up for that, you can control where the ball goes and how you hit it.

Depending on your Tennis abilities and/or how long you play the game, there are different classes you can play to change difficulty: Novice, Amateur and Professional. The game also tracks your play time, TP earned, Achievements, Killer Shots, Max. Rally, Max. Combo and Top Speed. In addition, there are 100 achievements to earn and 10 bonuses to earn, so there is plenty to do in the game.

The graphics of this game are absolutely adorable. Definitely a kid friendly game, but one that will appeal to the casual gamer, also. Characters were easy to control and the visuals ran smoothly. Sound effects and music both felt appropriate to the game and I did not find myself annoyed by it at any point in time.

A major downer for me, apart from not being able to physically move my character during basic game play is that it is relatively easy to anticipate the opponents moves. If you do move up in difficulty, this does change a bit but still remains fairly easy. However, to keep the game challenging, the longer you play in a match, the faster the ball goes, making it harder and harder to keep up with hitting the ball.

This is a relatively simple game of Tennis with adorable graphics and characters. While simple, it is still fairly fun from a casual gaming standpoint. The downfall is your character moves on its own and it is easy to anticipate opponents movements. However, this is a kid friendly and family friendly game, so for the $8 price tag it is a fun game for kids and families to enjoy together.

For more great reviews, news, giveaways and raffles, check Mer out at over at The Switch Effect!

I am a 29 year old Queer Parent. I have one birth son from a previous relationship and my partner has 3 children from a previous relationship, and together we make a bomb ass blended family. With 2 cats and a dog who we are currently training to be an Emotional Support Dog for our 7 year old daughter (and hell, the rest of the family at that), life can get pretty chaotic. I am GenderQueer. While I lean more to the masculine side, I identify as both male and female. I work as a Domestic Violence Advocate, and in my spare time when I'm not being run over by small children, I enjoy photography as a hobby.