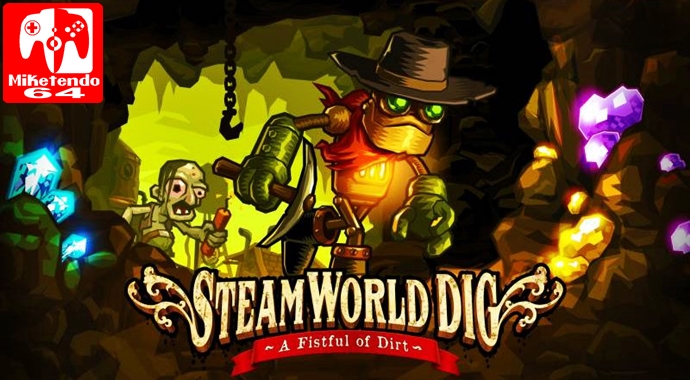 Forget the boys, Rusty is back in Town!

In what has to be the weirdest release period by any games developer and publisher ever, after giving us both SteamWorld Dig 2 and SteamWorld Heist: Ultimate Edition, the next game in the series to see its release is none other than the game that gave us Rusty in the first place!

It took a bit of time, but SteamWorld Dig is out on Switch this week, but I must warn you, if you’re already comparing it to Dig 2, than you need to stop those comparison right this second, as Dig and Dig 2, may share plenty of qualities, but Dig 2 is everything Dig never had the chance to be. I am not saying SteamWorld Dig is an abysmal game in comparison, as Dig is a wonderful game and actually become something of a classic since its initial release in 2013, but if you’re expecting the Switch port to have the same visuals as Dig 2, than you’re going to need a reality check as Dig on Switch is the same game we saw get a remaster when it launched as part of the SteamWorld Collection, which consisted of Dig and Heist.

Still, just because it is the remastered version we got a few years ago, it is no reason to write it off just yet, because Dig is a classic and although it is a much smaller game than Dig 2 is, due to a much smaller budget and Image & Form not having the means to make it the perfect Dig game that Dig 2 seemingly is, if it was not for Dig in the first place, there never would have been a Dig 2 and that would have been a travesty as Dig 2 is an indie 10/10 in my book! That’s enough about that though, you’re here to learn about Dig on Switch and learn you shall! Like its successor, Dig is a 2D platformer that only really scratched the surface of what a Metroidvania game could ever be, but it did it in such a way that is still charming, compelling and accessible to gamers of any skill level.

It’s also a game that tells the story of Rusty, a Steambot who inhabits an alternative earth to our own, with a Steampunk meets Western 20th setting, with other Steambots. Rusty one day turns up in Tumbleton at the behest of his Uncle Joe, due to inheriting the deeds to his uncle’s mine. Only, Uncle Joe is missing, believed dead and the task of finding what become of him, has landed upon Rusty’s shoulders. Finding his uncle will not be easy, as layers upon layers of dirt lie between Rusty and the true, but Rusty is not afraid of some hard work.

Under the control of the player, Rusty must take to the mine beneath Tumbleton and dig away to his heart’s content, uncovering rare ores that when taken back to the surface, can fetch a pretty penny and encounter various monsters. One such species he’ll encounter down that, in addition to the Vectrons, are the cave-dwelling Slimers, the last of what remains of the human race after years of devolution. Not everything Rusty can strike with his pickaxe will break upon impact, so while some lumps of rock and dirt may require a couple of strikes, some will need something a lot stronger, like a drill that will drill straight through them and luckily for Rusty, such an item is available. Provided Rusty digs his way deep enough to reach caverns where treasures and Gold Cogs can be collected and certain powers can also be acquired as well.

With the obtainable powers/assimilated technology, which includes the drill Rusty can wield, a double jump, a Steam Jump that allows Rusty to use water to leap higher than normal, or even a particular set of boots that allow you to run faster, Rusty can reach new depths that were once unavailable to him and climb back up to the surface. While it is all well and good exploring the depths to your heart’s content, Rusty can only carry a finite amount of ore, so unless he carries it all back to the surface and sells it to Dorothy, aka Dot in SteamWorld Dig 2, he runs the risk of losing it, should he die. Granted your lost lot will result in becoming dropped swag bag that can be collected, you’ll still need to reach the spot where you died in one piece and make it back topside.

I realise the constant back and forth can seem a bit repetitive in the first hour of gameplay, due to Rusty only having 3 item slots for gems and ore, which can be discarded if you need to, but the more you sell, the more coins you will earn. With more coins, you can buy a whole manner of items, such as newer and bigger carry pouches for items, upgrade your pickaxe’s strength and digging capabilities, but there’s also upgrades for more life, more water tanks that stores the water you use for most of the abilities/powers. Not every upgrade can be brought outright, or from the same shop, as the more materials you bring up and trade in, the more you can level up and unlock new upgrades and shops to buy the new upgrades from. (There are 3 shops in total, with one being run by Dot’s dad.)

Not every upgrade can be brought with just coins, as Orbs are required as well, which like the minerals that can be discovered everywhere, the Orbs can also be found in the weak dirt and breakable rock, so when you see it, be sure to dig them out as soon as you can, because they really do come in handy, even if you’re just using them to buy one-time use teleporters that can warp you straight to the surface, whenever you’re in need of a quick exit. (Teleporters can be brought from Dot’s dad, as can dynamite sticks that make a bang and ladders that you can plant in the mine and use them to reach the harder to reach areas in the early stages of the game.)

Now, although Dig is nowhere near as big/long as Dig 2 is, as players can blitz through Dig 1 in less than 5 hours and need over 12 for Dig 2 at least, and nor does it have a New Game+ mode, it does feature rooms that are generated, so every playthrough of Dig does in fact differ. Even if it didn’t though, SteamWorld Dig is still a classic, unmissable game that is funny, great looking and has a secret area home to a huge Super Mario Bros. easter egg, which includes a castle, warp pipes and an underground area. Also, when in the Mario-like area, instead of having ore and minerals, it has coin blocks that when struck, will actually drop coins and Dig 2 doesn’t have anything quite like that (unfortunately.) So, if you’re looking for more Metroidvania/Dig-like action on Switch, which isn’t SteamWorld Dig 2, then look no further because SteamWorld Dig has arrived and it still delivers, only now it delivers on Switch!

Dig may not the same game Dig 2 is, as Image & Form were able to finally implement the ideas they couldn’t before and build upon everything they did right and wrong with the first game, but Dig is still very much so the classic game it once was. Couple that with the fact its only $9.99 in the eShop, even if you have played and beaten the game a million times over, Dig is one of those games you can easily play yet again, especially since it is worth buying a piece of Image & Form history, just so that you can have it on your Switch and have it join the other games in the series. Only you can complete the trinity and you know you want to!

One thought on “[Review] SteamWorld Dig: A Fistful of Dirt (Nintendo Switch)”