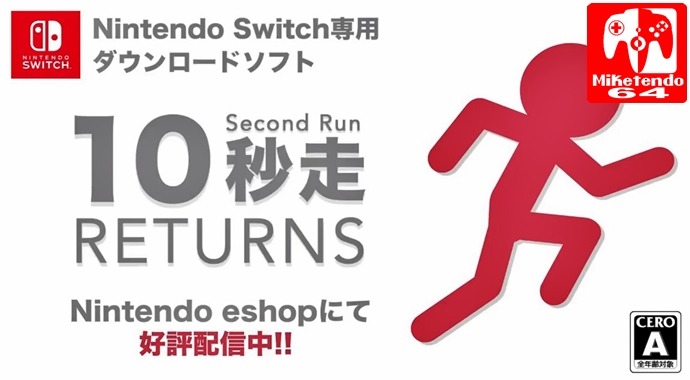 Why play a game that takes minutes to complete each level, when 10 Seconds is more than enough?

In this day and age, while gaming has become a lot easier than it once was due to games becoming less difficult and the fact that mobile gaming has really took off, over the last decade, sadly many of us who have been gamers since the beginning, are no longer the gamers we once was. Time and age has caught up with a great number of us and due to things like work, partners and other responsibilities that take up a lot of our time, as much as we would love to 100% video games like The Elder Scrolls V: Skyrim and The Legend of Zelda: Breath of the Wild, we just don’t have the time to do that anymore and instead have to resort to completing them and trying to do the same with the next game we want to play.

Fortunately, whilst games are getting bigger and requiring more time to beat them, there are developers out there who are well aware of this issue and as such, they make games that are either pure quality on a small package, or an interesting game with an interesting gimmick and some very, very short levels that can be completed in seconds and 10 Second Run RETURNS, could very be a game to be counted among the latter. First released on Switch last month in Japan, and first out on the 28th of April, 2010 under the name of GO Series: 10 Second Run, as DSiWare, 10 Second Run has returned (hence the this time,) and if you never checked it out before, you might want to this time.

Granted it is a very basic looking platformer game that has a Stickman for a protagonist and has 100 levels that could be completed within mere hours depending on your skill level, 10 Second Run RETURNS is one of the very few games on Switch that truly show off the pick-up and play concept. As a game, with levels that can be completed in 10 seconds or less, 10 Second Run RETURNS is a game where even if you literally only have a minute to spare, you can boot up the game if the software is closed, and play a level. You might not actually beat it, due to being in an absolute rush, but you can dive right into the gameplay, try to beat a level or two and then put your Switch into Sleep mode and carry on about your day. But should your console already be in sleep mode when you reach out for it to play, you could easily try a single level at least three times if you wish, in that minute you have spare, so you won’t get a more literal pick-up and play game than 10 Second Run RETURNS.

However, just because 10 Second Run RETURNS is a game that consists of levels that can be beaten in less than 10 seconds, it doesn’t mean this review is only going to take you 10 seconds to read, so let’s get right into the gameplay and levels shall we? Firstly, although there are 100 levels to play, 51-100 are actually hidden levels and if you wish to reach them, you will need to beat the first 50 levels in the game to open up the hidden ones, but beating a level is more than just running from one side to the other, whilst attempting to dodge enemies ad traps, and having to race against a clock. You see, in addition to all that, there are 3 collectable Blue Stars on every level and while you might be tempted to skip them, collecting them do in fact give you access to levels that require you to have a certain number of stars beforehand.

Now, although the Stars can be quite difficult to acquire, as some are often in very dangerous locales, it is possible to get all 3 and beat the level, which is something you will want to do, since getting all 3 in a single playthrough is the only way to properly complete each level and earn a gold medal for your efforts. Now, some levels can be incredibly difficult at first, but if you give yourself some time to take in the surroundings, you’ll be able to figure out the levels in no time and you won’t just have to do that by playing through the level, but you can do it from the stage select screen as well, as a map of each stage will be presented to you and if you find yourself of getting bored of playing as the same typical Stickman hero, there are many unlockable skins and they can get as bizarre as they can be fun.

Should a solo experience not be enough for you though, you can always grab a friend, give them a single Joy-Con and go head to head in a single run on any of the levels you have previously played and beaten. There are no collectable Stars when competing against one another, but the levels can still be tricky if you’re not careful and failure will still great you. However, if 1 friend isn’t enough, why not grab 3? In addition to the VS Battle mode, 10 Second Run RETURNS also has a Battle Royale mode, which is exactly the same as VS Battle, but 4 of you can play it at the same time, head-to-head with another, in a bid to find out who is the true platformer King/Queen in your group and even if that was the sole reason you need to purchase 10 Second Run RETURNS, it is all the reason you could actually need.

10 Second Run RETURNS might not be the biggest game in the world, or even the best looking one, sometimes less is more and 10 Second Run RETURNS is proof of that. It is short, yet engaging and is quite a lot of fun for a game that only costs $6.54 US dollars and most definitely feels like a great fit for the Nintendo Switch as it is a co-op game you can dive right into, thanks to support for split Joy-Con.